In Davos, PM May unveils vision for global Britain post-Brexit 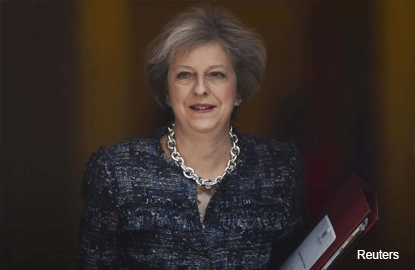 DAVOS, Switzerland (Jan 19): Prime Minister Theresa May unveiled her vision for Britain after Brexit on Thursday, describing its future role as a defender of free trade and globalisation in a speech intended to ease concerns among the global business elite.

In her first appearance at the World Economic Forum in Davos, where the world's business elite congregates in the Swiss Alps, May pressed her mantra that Britain would become more global after voting to leave the European Union.

Just two days after she warned the EU that no deal was better than a bad deal, May sought to soothe ties with the bloc and played to her audience, a mixture of business and political leaders, by promoting Britain's investment advantages.

"I want to explain how ... the United Kingdom — a country that has so often been at the forefront of economic and social change — will step up to a new leadership role as the strongest and most forceful advocate for business, free markets and free trade anywhere in the world," she told a packed congress hall.

"Our decision to leave the European Union was no rejection of our friends in Europe, with whom we share common interests and values and so much else. It was no attempt to become more distant from them, or to cease the cooperation that has helped to keep our continent secure and strong."

May said there would be times of uncertainty after Britain triggers Article 50 of the EU's Lisbon Treaty to start some of the most complicated talks the country has waged since World War Two, but spoke of her confidence for the future.

It was a more conciliatory tone than the one heard in her speech on Tuesday, when she warned that Britain could change its economic model if shut out of access to the single market, echoing comments by her finance minister that the government could cut taxes to maintain competitiveness.

May's comments drew applause in Davos, but most of the discussion focused on Tuesday's speech.

"I thought she had a very hard act to follow, which was her own, and that she was great on Tuesday," Barbara Judge, chairman of Britain's Institute of Directors, told Reuters.

She credited May with calming business fears of falling off a cliff edge into uncertain trading conditions when she explained that she wanted the phased implementation of any deal.

"I believe the most significant part of the speech was the wording that it's not going to be transitional but a phased process of implementation because that shows it's not a cliff edge — it's learning how to feel comfortable in the new world."

Even some of May's critics praised Tuesday's speech. Mark Malloch-Brown, a former Labour government minister and an independent member of Britain's upper house of parliament, described it as "well-managed".

"I think it certainly quieted the critics who said she had no plan," he told Reuters, adding that only time would tell whether May could pull off the complicated negotiations.

One Davos attendee added: "She says all the right words, the question is whether anyone believes them."