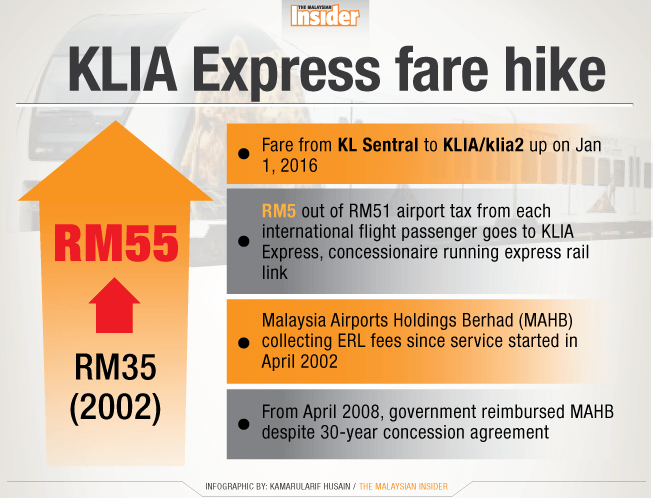 (Dec 2): Putrajaya should suspend the proposed fare increase for the express rail link (ERL), and instead conduct an open inquiry to establish a reasonable price revision, a DAP lawmaker said.

“I call upon Liow to suspend indefinitely the proposed fare increase by KLIA Express and to conduct an open inquiry as to what a reasonable fare revision may entail,” he said in a statement today.

ERL said yesterday the fare for a one-way trip between KL Sentral and KLIA/klia2 would be raised RM20 to RM55 from January 1.

This was the first revision made since the service commenced operations almost 14 years ago, ERL chief executive officer Noormah Mohd Noor said when announcing the fare increase yesterday.

Ong said Liow must also explain why he allowed such “daylight robbery” with the fare set to increase by a whopping 57%.

“This exorbitant fare increase by KLIA Express is yet another example of the socialisation of costs and the ‘piratisation’ of profits which occurs in many projects in Malaysia.”

He was referring to the fact that the majority owner of KLIA Express is YTL Corporation, whose subsidiary Syarikat Pembenaan Yeoh Tiong Lay Sdn Bhd was awarded the RM2.4 billion contract to construct the railway link to KLIA.

“This means that YTL Corporation would have reaped at least some profits from the building of the railway link to KLIA,” he added.

KLIA Express, the DAP lawmaker said, has seen some 40% increase in usage following the opening of the klia2 extension. Six new train units had to be ordered at the end of last year because of the influx in traffic.

“The increase in ridership would surely have increased the revenue as well as profits of KLIA Express.

“I want to remind the public that the cost of constructing the klia2 extension, which was RM100 million, was paid for totally by the government. This means that KLIA Express gets to enjoy the monetary benefits of the increase in ridership without having to spend any additional capital expenditure.”

KLIA Express had also signed a long-term lease with the Railway Asset Corporation (RAC) to use the railway link between KL Sentral, KLIA and klia2, Ong said, adding that he doubted that the leasing rates had increased by more than 50% to justify the fare revision.

He also said KLIA Express was paid RM5 out of every RM51 airport tax collected from international passengers.

“If so, why must KLIA Express increase its fare by such an exorbitant amount? Liow Tiong Lai must explain.” – The Malaysian Insider