DAMANSARA REALTY BHD (DRealty), controlled by Datuk Daing A Malek Daing Abdul Rahaman, is aiming to quadruple its annual revenue to RM1 billion in two years. The company is banking on the development of a RM10 billion mixed-use development project in Johor Baru.

According to group managing director Syed Omar Syed Mohamed, DRealty has the rights to develop a 68-acre parcel in Taman Damansara Aliff — owned by Johor Corporation (JCorp) — until 2016. However, the group is planning to acquire the land outright for RM120 million. 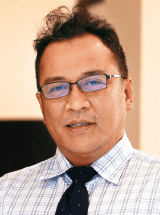 “The management is looking at a development with a projected RM10 billion in GDV (gross development value) within the next 10 years. It is in a very mature area, smack between Bandar Baru Uda, with a population of about 80,000, and Kempas, which has 100,000.

“This is an asset that we will not forgo; we will settle the development rights payment this year or early next year. The land cost is not more than RM50 per sq ft, while the market price is far higher than RM150 psf,” says Omar during an interview with The Edge.

To recap, DRealty signed the 10-year development rights agreement in 2002. The consideration involved DRealty paying RM180 million to JCorp from the profits it makes from developing property projects on the land.

“We are now devising a financial plan to settle the RM120 million and transfer the land title to DRealty. This is the best way for us to acquire land in Johor because land prices have gone up more than four times since 2002,” says Omar.

The project, which is going to use the well-known brand of Damansara Heights, will feature a five-star hotel, several blocks of high-rise residential units and office suites, as well as a specialist hospital for coronary heart diseases, tentatively called National Heart Institute 2 or IJN2.

“We have received the nod from the Minister of Health. However, the details have not been outlined yet [as to] whether we are going to work with IJN or not,” says Omar.

The whole Damansara Heights project will have 12 million sq ft of floor space in total and the first phase will be launched in October, says Omar.

Over the last few years, the property market in South Johor has been thriving but DRealty has not seemed to ride the boom. This may explain the downtrend in its share price, falling from the five-year peak of RM1.93 on April 23,  2014, to 90 sen last Thursday. 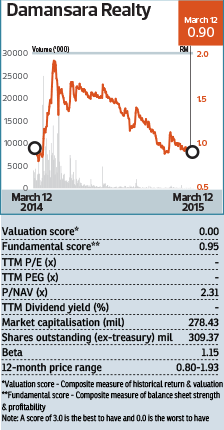 However, while DRealty is now trying to get back into the game, the property market is cooling, with some developers reportedly scaling down launches.

Nevertheless, Omar is unperturbed by the slowing property market in south Johor. “Even in 1997, when we had the Asian financial crisis, property was still the main asset that people invested in. And the massive launches over the years were mainly in the water-fronting areas.

“These areas are facing a massive glut right now as big foreign developers have got in and built projects, hedging the water-fronting quality, pushing prices up to RM1,000 psf,” explains Omar.

He adds that Damansara Heights will cater for locals and Singaporeans.

Elsewhere in Kuantan, DRealty is also developing a 504-acre parcel in the Bandar Damansara Kuantan township. The group is revising the development plan and product offerings to appeal to current customers, says Omar.

DRealty is revamping its parking management business through Metro Parking (M) Sdn Bhd. Going forward, the company is changing its business model from a contract basis to a concession basis with a longer period, says Omar.

“With the 1,000-strong staff that Metro Parking has, I believe we need to do a rebranding of the company. We have improved its revenue and cost containment. We also need to look at the business propositions.

“At the moment, Metro Parking operates on a rental contract basis of about three years, with a possible extension of two years. What we want to do now is build multilevel car parks and sign a longer concession period of about 25 years,” says Omar.

This strategy is to ensure recurring income and build up DRealty’s assets base, explains Omar. The group is determined to stay the largest private parking management business in the country, he adds.

The agreement to conduct the study will be signed by HTS and its local partner Pacific Asia (PNG) Ltd with the government of Papua New Guinea next month. If the study is accepted by the government, the HTSPacific Asia consortium will be appointed to construct the hospital, says Omar.

“Based on the RM2 million per bed cost of building a hospital in Malaysia, we estimate that the contract value would be around RM1 billion. However, we don’t have the financial and technical capability to undertake such a massive project,” he says.

So, the project will be funded by China through the Export-Import Bank of China. The Chinese government will want a large portion of the contracts to be given to its contractors, says Omar.

However, he believes that HTS–Pacific Asia consortium will be able to clinch about RM400 million worth of jobs from the project. HTS could also supply the hospital with machinery and equipment, he adds.