Daim: Malaysia far from being able to compete globally 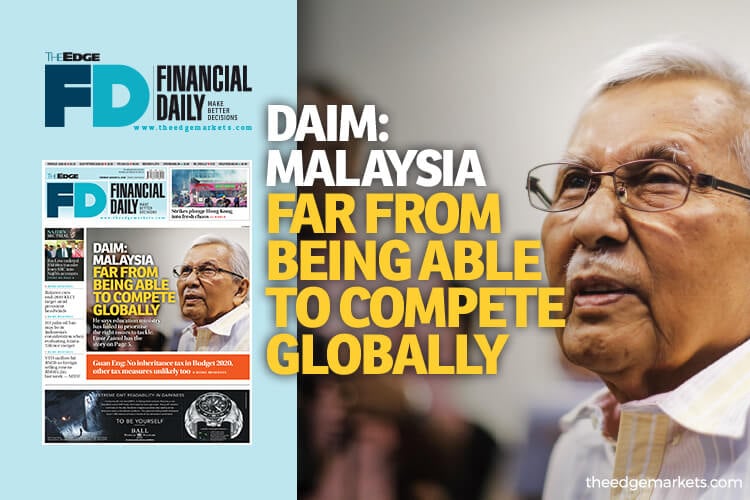 KUALA LUMPUR: Malaysia is still far from reaching the status of a developed country with a unified citizen that is ready to face the industrial challenges of the future, said Council of Eminent Persons chairman Tun Daim Zainuddin.

“And underpinning all of this unpreparedness is education,” he said at the launch of the International Conference on Emerging Issues in Public Policy at Universiti Malaya’s Institute of Public Policy and Management.

The former finance minister pointed out that education is the key to preparing the youth for the future. However, he said the education ministry has failed to prioritise the right issues to tackle, which has hindered the progress of reforms within the national education policy.

“We are still arguing over whether we should teach Maths and Science in English, when the rest of the world has embarked on advanced curriculums that focus on Industrial Revolution 4.0 (IR4) so as to make their youth more competitive and relevant in a world that is going to be dominated by artificial intelligence and robotics,” he said.

“To participate in IR4, we must go through a knowledge-based economy and here Malaysia has failed because the government, through the ministry of education, has not got its priorities right. The education ministry must not fail our nation.

“While we are still mired in the political rhetoric of languages, others around us have moved beyond English or Mandarin or Bahasa Malaysia into the language of programming and coding. When will we realise just how far behind we are and lacking?” Daim added.

In facing the rise of technology in industrialisation, Daim said the government should implement policies that create an environment where people are allowed to maximise their potential and pursue creative pursuits that are complemented by technology, not replaced by it.

The reality is, he said, technology will have the most impact on future employment as robots replace humans in menial tasks. But where one window closes, another opens, he added.

At the same time, Daim stressed that education is not just for skills development, but it is also for the soul. He said the values, that are instilled in the youth at home and at the school level, will greatly impact on the type of adults they evolve into.

“We must empower them with the ability to think critically, logically, wisely and to make their own informed decisions, no matter the situation. We must raise a new generation of leaders and great thinkers, not of sheep and cowards,” he said.