Cypark Resources Bhd
(April 1, RM1.83)
Maintain add with a target price of RM2.37: Cypark’s revenue in the first quarter of financial year 2015 (1QFY15) grew by 16.4% year-on-year (y-o-y), driven mainly by strong performances from its landscaping and infrastructure division and renewable energy division, which expanded 90.5% y-o-y and 14% y-o-y respectively. The strong y-o-y growth for its infrastructure division was mainly due to the various construction projects that Cypark undertook while its renewable energy revenue continued to grow in tandem with capacity expansion.

This was dragged down by its environmental engineering division, where revenue declined by 11.9% y-o-y as it reached the final stage of the first phase of its Ladang Tanah Merah (LTM) project. Construction on Phase 2 of the project is set to commence in 2Q of calendar year 2015. Overall, 1QFY15 earnings grew by 10.4% y-o-y.

Cypark’s LTM concession is expected to begin since Phase 1 of the project is almost ready. The concession is for 25 years, during which Cypark will open, maintain and close the landfill in Negeri Sembilan. Cypark will generate tipping fees of RM30 to RM40 per tonne of municipal solid waste. The second phase will involve a waste-to-energy plant that will use the waste as feedstock for electricity generation.

We expect Cypark to deliver stronger earnings in the coming quarters as it continues to expand its renewable energy capacity. — CIMB Research, April 1 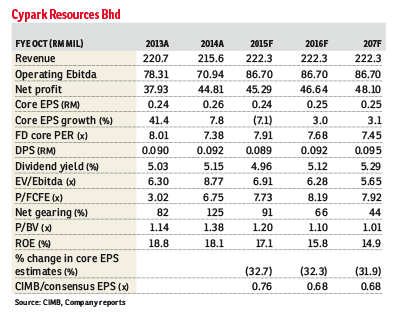