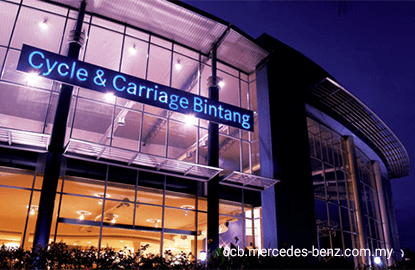 The group declared a final dividend of five sen per share for the financial year ended Dec 31, 2015, payable on May 24.

Nonetheless, the stellar set of financial results fails to lift its share price. Indeed, the stock dropped 15 sen, or 4.5%, to RM3.59 in the morning trading session. Its share price has rebounded from a low of RM2.46 in September last year to a high of RM3.81 in January.

Revenue for the year surged 71.3% to RM1.58 billion from RM922.46 million a year ago, due to an increase in unit sales and a favourable sales mix weighted towards higher-priced vehicles, particularly hybrid models.

"The group's performance for the full year was much improved, reflecting strong Mercedes-Benz passenger car sales and the return to recognising the annual dividend income from Mercedes-Benz Malaysia," said its chairman Alex Newbigging in a statement.

He noted a net profit of RM40.9 million was recorded by Mercedes-Benz operations, compared with RM10.3 million in the previous year, due to increased revenue and improved margins.

"Overall net profit was RM52.1 million, with the return to recognising the annual dividend from the group's investment in MBM (Mercedes-Benz Malaysia), a joint venture with Daimler AG.

"The dividend of RM11.2 million was received in June," he added.

Going forward, Newbigging said the group will continue to upgrade its facilities to the current Mercedes-Benz standards. The upgrade commenced in 2015 and will continue throughout 2016.

"The first of these upgrades to existing facilities in Petaling Jaya and Georgetown will be completed in the first quarter of 2016, while the construction of the new Autohaus in Cheras, Kuala Lumpur, is targeted to be completed by March 2016," he added.

"Trading conditions in 2016 are expected to be challenging, due to a generally weaker domestic and global economic outlook, combined with the phase-out of the key E-Class model," he said.