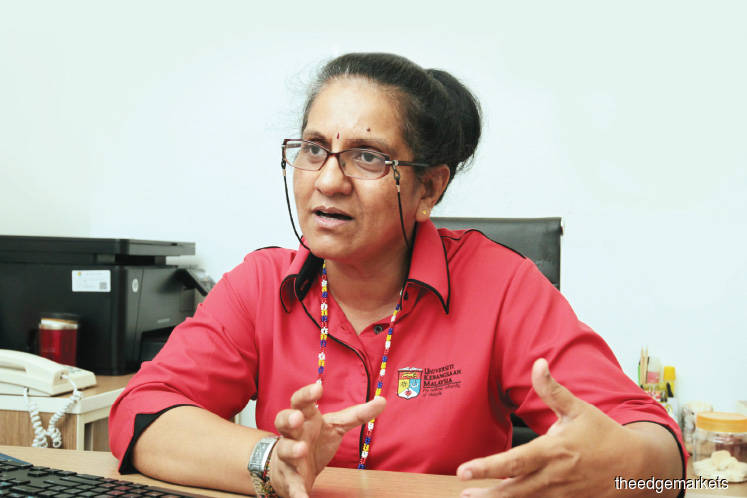 For the dental sensor project we have SilTerra, the solid-state electronics team, the imaging team, computer scientists, dentists, physiologists and more. People need to accept that they need to collaborate to come up with a good solution. - Kalaivani

Dr Kalaivani Chellapan, senior lecturer at Universiti Kebangsaaan Malaysia’s (UKM) Faculty of Engineering and Built Environment, has had no fewer than 10 painful root canals. She loathed each visit to the dentist. The problem, she decided, was that dentists could not clearly detect what was wrong with her teeth and gums from a simple X-ray.

“X-rays involve radiation and cannot be repeated. Also, you cannot typically detect the root, so it is a challenge for dentists to pinpoint which roots they need to remove,” she says.

The gums, she adds, are delicate and any treatment tends to be agonising. “Imagine how people would feel if they find out that the inflammation has not been thoroughly treated and they must go through the treatment all over again.”

Kalaivani wished her dentists had access to the same devices as ear, nose and throat specialists. Endoscopes, for example, are thin, flexible tubes with a tiny camera and a light at the end that can be inserted into the body’s orifices to help the specialists with their diagnoses. But, with the present technology, she didn’t see how it could be achieved.

Then, a representative from SilTerra Malaysia Sdn Bhd, a local semiconductor wafer foundry, approached her with a technology that could be used to develop sensors. Taking one look at it, she knew this technology was the answer to her prayers.

UKM and SilTerra had been connected for some time. The university has always used SilTerra circuit boards to train its undergraduates, she says. “SilTerra develops semiconductor techology. I am not a semiconductor researcher, so, I do not typically come in contact with the company for university matters.

“However, I am on the committee the Ministry of Health’s (MoH) telemedicine group, together with SilTerra vice-president of strategic management Tan Eng Tong. He told me the company had developed a sophisticated sensor but did not know what to do with it and he asked me to think of something. I immediately thought of developing an imaging device for dental treatments,” says Kalaivani.

The device she is working on is not yet available in the market. But once it materialises, it could be considered a major breakthrough technology from Malaysia.

Kalaivani has worked on electrical circuits with a sensor before. For her PhD, she worked with optical sensors to non-invasively measure vascular age and vascular risk. She says that this is made possible by using photoplethysmography (PPG), a simple, low-cost optical technique that is widely used to detect changes in blood volume in the microvascular bed of tissue.

PPG measures relative changes in volume in the blood vessels close to the skin. By applying a probe to the fingertip, Kalaivani is able to measure the pulse waveform, which is then filtered, digitised and post-processed. Depending on the blood flow’s compliance and resistance and blood viscosity, the vascular age can be estimated.

Kalaivani is delighted to be able to work with SilTerra. Without this collaboration, it would be a lot trickier for academicians like her to work on projects like the dental imaging device.

“Before the project was kick-started, I had already spoken to a few dentists and they told me they wanted something small and flexible to be able to manoeuvre in the patient’s mouth. That is why I was happy when SilTerra told me it has a small, pen-sized sensor that can work in an aquatic environment,” says Kalaivani.

There are four blocks of work necessary to complete the entire process, she adds. The first, developing the sensor, had already been done by SilTerra. Next is developing the electrical circuit. This is a work in progress by Kalaivani’s team. Once this is done, they will move on to the third block, capturing the signal and sending it to the team responsible for image processing.

The last block is mechanical development. A fabrication team will be needed to help design and package the devices into something that is practical to use. Kalaivani is thinking of working with industry players like Omron or B Braun for this purpose.

“Afterwards, we will go through clinical testing. If the dentists are comfortable with the device, we will send an application for approval to MoH’s Medical Device Authority,” says Kalaivani.

She clarified that at the initial stage, dentists will treat the device as an additional assistance — they will continue to use X-rays. However, this may change over time as the effectiveness of the device may increase with more images captured.

“All of the images will be uploaded to the cloud, joining a repository of images that other dentists have taken. They can refer to this repository for verification purposes,” says Kalaivani.

“Reaching that stage may easily take 8 to 10 years, but I am excited about it. Hopefully, I will see it commercialised,” says Kalaivani.

The struggles of university innovation

Commercialising innovative research is a great platform to help increase the country’s wealth. Although a lot of effort has been put into encouraging commercialisation, thus far, the success rate has been less than encouraging.

Kalaivani says this is because of a lack of efficient integration. She says that in many developed countries, research centres are holistic. Different divisions, such as electrical engineering, mechanical engineering, social science and computer engineers, work together in an integrated manner. The centres also provide common areas for researchers to get together and discuss problems and come up with ideas for new solutions.

Integration is important — this is why Kalaivani champions interdisciplinary research, a mode of research that integrates information, data, techniques, tools, perspectives, concepts and theories from two or more disciplines or bodies of specialised knowledge to come up with solutions that are beyond the scope of a single discipline or area of research practice. In Kalaivani’s case, it is in medical devices.

“Generally, what we are trying to do is improve treatments. But doctors always ask me whether I am trying to replace them. I am a big believer in the human touch — even e-learning, no matter how advanced it is, cannot replace teachers. So how can new technologies replace doctors? Our goal is not to replace them, but provide them with better assistance so treatments and operations are more effective.

“Some doctors also ask me why I am entering their field. Aren’t they supposed to come up with these improvements? I explain that we have to do it together. For the dental sensor project, for example, we have SilTerra, the solid-state electronics team, the imaging team, computer scientists, dentists, physiologists and more. People need to accept that they need to collaborate to come up with a good solution,” says Kalaivani.

There is another obvious reason why it is hard for university innovation to take off — the lack of funding. Kalaivani says that in Malaysia, government funds for research are given according to one’s field of expertise. Therefore, it is difficult for those like Kalaivani — an electrical and electronics expert — to get funding for medical-related research.

She could get more funding if she worked with foreign researchers. However, that is risky, says Kalaivani. Foreign researchers tend to hijack the entire research, taking most of the credit.

“There is one senior lecturer who wants to meet me every time he visits Malaysia. Over the past few years, I realised that everything I share with him turns into his research. These people are fast — they have the money, they have the people. It is frustrating,” says Kalaivani.

She wants to conduct research on dementia but does not have the resources at the moment. She would require less than RM3 million to set up a small research facility for it. She did approach a team from the UK for a partnership to be able to kick-start the research, but they asked her for specific details — which Kalaivani is reluctant to give, fearing that this, too, would be hijacked.

She and her interdisciplinary research group have taken it upon themselves to fund their own research. In 2016, they established the Graduate Academic Competence Empowerment Programme (PKAS) which, to start with, provides paid workshops for postgraduate students who have not received sponsorship through research funds.

In 2017, PKAS began its collaboration with UKM’s Faculty of Education to strengthen science, technology, engineering and mathematics (STEM) education at the school level. It aims to pique students’ interest in STEM in school, with the additional elements of art that will ensure the empowerment of the students, particularly in the field of the Internet of Things. The programme was developed with a strong interdisciplinary element.

“To help us earn more income, we also sell products like books. We had a joint venture with a local company called Brainet to tie the books in with some toys it produces. We received a positive response to the products and, hopefully, we will be able to earn more to fund our research,” says Kalaivani.