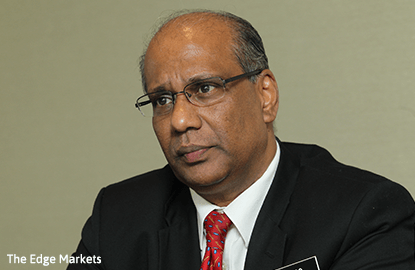 “The United Arab Emirates will implement GST — or value added tax (VAT) — in 2018. Now, there are already inquiries on Malaysia’s model and the success of the country’s implementation. Malaysia is a pioneer in this implementation, especially when it comes to Islamic-related products,” he said.

Like Malaysia, many Middle Eastern governments are faced with shrivelling revenues because of the sharp fall in the price of crude oil over the past one year plus, as they rely heavily on black gold to fatten their coffers.

Subromaniam said a consumption tax is better able to endure economic shock, because of its broad base. And while this tax ought to be good for the government, he said consumers too will benefit in the long run.

In Malaysia’s case, he noted the increase in prices of goods have already tapered off, nearly one year into the implementation.

“Most of the prices went up before the implementation date, because it’s easier to hide under the old tax system and profiteer,” Subromaniam said, while adding that he cannot comment much on cases of profiteering, because it falls under Ministry of Domestic Trade, Co-operatives and Consumerism’s supervision.

But nearly one year on since GST was implemented in April last year, it seems there is still a lot of confusion and misunderstanding on GST, said Grant Thornton partner and head of indirect taxes for APAC, Lorraine Parkin.

“Businesses in Malaysia should focus on managing risks, getting their systems and processes right; understand their supply chains, so that they can actually pay the right amount of tax,” she said.

Subromaniam said the Royal Malaysian Customs Department is dispatching its audit teams to help out businesses on filing the proper amount to tax, and what not to tax.

This, he said, is one of the measures done to help the government achieve its target of collecting RM39 billion in proceeds from the GST. The figure, for the full year 2016, is more than the annualised figure of RM36 billion in 2015.

Subromaniam added that there are still “tens of thousands” of companies that have yet to register for GST.

"And the number could change, because there are new companies constantly being registered."