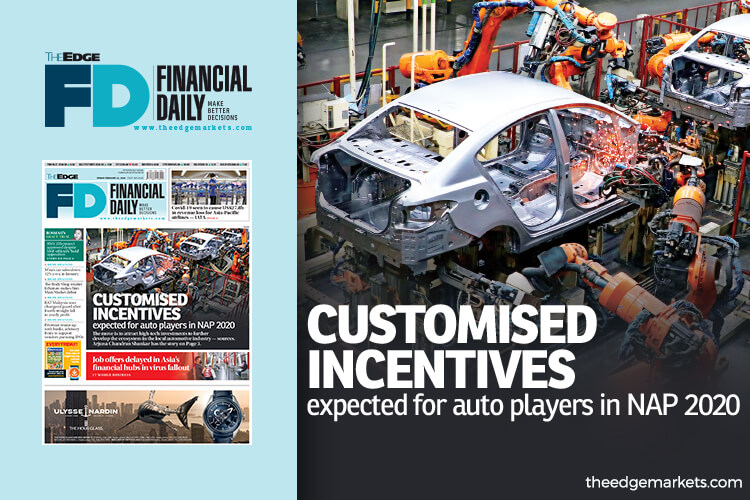 KUALA LUMPUR: The National Automotive Policy (NAP) will continue to offer customised incentives that cater to the needs of each automotive (auto) part manufacturers and automakers — a move to attract investments to further develop the ecosystem in the local auto industry.

The customised incentives aim to boost the competitiveness of the domestic automotive industry in order to be the regional auto hub for foreign car manufacturers.

These incentives are expected to skew toward attracting investments in high technology content, industry sources told The Edge Financial Daily.

Furthermore, the 10-year NAP intends to cut red tape and streamline the incentive application process by routing all automotive-related investment to the international trade and industry ministry (Miti) and the Malaysia Automotive, Robotics and IoT Institute (MARii), bypassing the finance ministry, the industry sources said.

The incentives provided are dependent on numerous factors, including product quality, position of the value chain, and the utilisation and compensation of local skilled labour.

The customised incentives will enable auto players to directly engage with the government on what they need for their Malaysian ventures to succeed, and likewise the government can in theory ensure that there is more foreign direct investment (FDI), greater employment and wage growth.

That said, some view the customised incentives make it difficult for foreign players to justify their investments in headquarters, as those incentives will be based on the results of direct negotiations, compared with a menu of incentives, such as those offered in Indonesia and Thailand.

Electrification, energy-efficient vehicles (EEV), and measures to develop the local auto industry to withstand the evolving industry landscape and technologies are among the issues that auto players are expecting the NAP to address.

Proton Holdings Bhd chief executive officer (CEO) Dr Li Chunrong told The Edge Financial Daily earlier that the provision of financial support should be strongly considered for the policy as investments in new technologies, research and development programmes will enhance the overall capabilities of the local industry.

Meanwhile, Bermaz Auto Bhd CEO Datuk Francis Lee Kok Chuan, noted that the Mazda exporter would like to see the government grant tax incentives to ensure that there is more localised car production here, particularly those like Bermaz which uses Malaysia as a regional production hub.

Few may know that the motor vehicles, trailers and semi-trailers sector is a major contributor to the government’s tax revenue.

The sector generated RM13.16 billion tax revenue in 2015, which was 24.9% of the government’s total tax collection of RM52.9 billion from commodities.

Total tax collected on commodities had been on a rising trend between 2005 and 2015.

Motor vehicles, trailers and semi-trailers continued to be the main contributors to tax collection, with a five-year compound annual growth rate of 2.5% accounting for a 24.9% share in 2015, followed by tobacco products at RM5.17 billion (10.3% growth; 9.8% share).

The auto part manufacturing industry attracted a total capital investment of RM5.76 billion, of which RM4.41 billion or 76.5% is domestic, between January and September 2019, compared with RM1.96 billion in 2018, according to Miti statistics.