Culture and heritage on the streets of Kuching 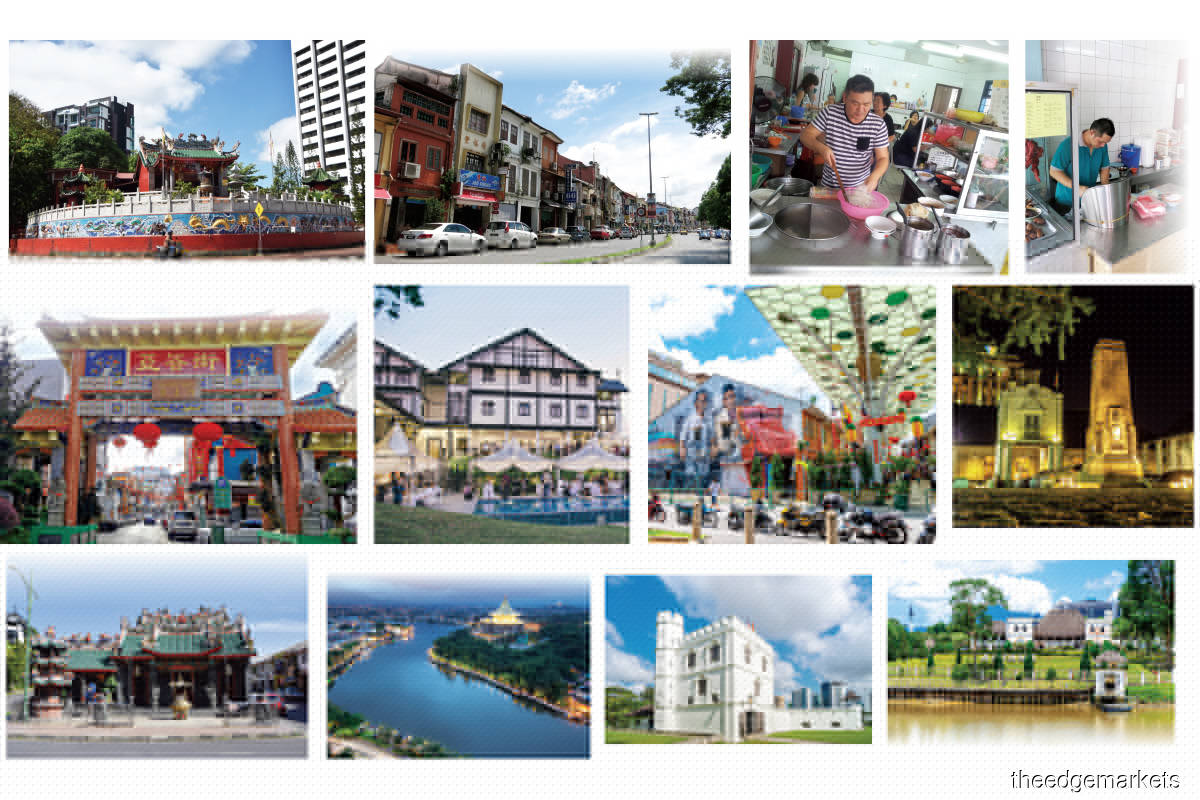 A busy riverine trading post in its early days, Kuching — the capital of Sarawak — has become a popular destination for local and foreign tourists. The Kuching Heritage Trail allows visitors to explore the historical buildings and many other attractions found within the city.

Originally known as Siew San Teng temple, the old Taoist temple is situated along Jalan Tunku Abdul Rahman. The temple has been there since 1770, having undergone major reconstruction in 1856, 1965 and 2002.

According to sarawaktourism.com, the location was selected carefully, in accordance with feng shui principles, and the temple is believed to bring peace, harmony and eternal prosperity to the Chinese community in Kuching. The primary deity of the temple is Tua Pek Kong, a Malaysian Chinese deity who is worshipped as the God of Prosperity. Other deities worshipped in this temple are the Bodhisattvas such as Guan Yin and Kshitigarbha.

The temple was one of the few buildings that survived the Great Fire of Kuching in 1884. Various traditional festivals have been held there annually, including the famous Wang Kang Festival to commemorate the dead. The Old Bazaar covers the Main Bazaar along the Sarawak River, as well as the other streets and alleys that were established in the area, starting in the 1860s. The Main Bazaar along Jalan Tunku Abdul Rahman is Kuching’s oldest streets, dating back to 1864, and now comprises a row of two- and three-storey shophouses. Today, the street showcases almost similar characteristics to the old shophouses on Carpenter Street, with fancy souvenir outlets selling traditional brassware, pottery, ceramics and tribal arts.

According to etawau.com, the street has some superb examples of Chinese shophouse architecture, many of which have been occupied by the same family for generations. These families still pursue traditional occupations such as tin-smithing, carpentry and petty trading.

Kuching’s best antique and handicraft shops are also found here, and shoppers can rest between bargaining sessions at a number of old-fashioned coffee shops with panelled walls and marble-topped tables. Parallel to the Main Bazaar is Carpenter Street. There, one can enjoy delicious food and experience what it was like before shopping malls emerged in the modern era.

Carpenter Street used to be known as Attap Street due to the use of nipa palm leaves on the buildings there. According to newsarawaktribune.com, the Great Fire of Kuching in 1884 ravaged the buildings along the Main Bazaar, which saw more than 190 shops burnt down.

These shophouses were then rebuilt using bricks but without the attap roofs, as ordered by the second White Rajah, Charles Brooke. The structures still stand today.

The street’s name was changed to Carpenter Street to reflect the various woodworking workshops there. Some of these traditional family businesses are still operating and are run by the second or third generation, who continue to live in the upper floors of the shophouses. Due to its rich cultural heritage, the street is a venue for the annual mooncake festival, according to sarawaktourism.com. In the 1920s, then 16-year-old Kiew Shao Ngap, who hailed from Guangdong, China, arrived in Kuching and lived at No 44 shophouse in Upper China Street. He initially worked at a Chinese medicine shop before renting a stall at a Hainanese coffee shop in Upper China Street and starting his own business in 1925, selling Jam Mian, a type of traditional Dabu Hakka noodles cooked with minced meat. Kolo mee, Kuching’s traditional noodle dish, tossed in a savoury pork and shallot mixture, is believed to have evolved from Jam Mian, according to kcholdbazaar.com. Lee Seng Shen, who is a Hainanese, travelled across the sea to Kuching in the 1920s. He got his start by working in a shop operated by one of the folks from his village. After becoming familiar with the environment, he started selling curry rice, and it is believed that he cooked two huge pots of curry rice daily and peddled the food on the streets of Kuching.

After a few years, Lee ended his hawker business and started a sundry shop and, later, a coffee shop. Then in the 1930s, he established Ann Lee Restaurant in Carpenter Street. It was the first high-end restaurant in Kuching with air conditioning. Its signature dishes included Qi Pan duck and roast pork.

At the end of the 1980s, Lee’s descendants decided to return to the original trade of selling curry rice and renamed the restaurant Kheng Lee Café, according to kcholdbazaar.com. Hong San Si Temple, which is located at the intersection of Wayang Street and Ewe Hai Street, is one of the most ornately decorated houses of worship in Kuching, with beautiful ceramic artwork and a ceramic carp adorning its rooftop. It comprises a main hall, side hall and a stage, and was managed by the Kuching Hokkien Association, according to kcholdbazaar.com.

According to sarawaktourism.com, the Taoist temple is dedicated to Hokkien child deity Kong Teck Choon Ong and is said to date back to 1848. It is believed that the child deity appeared on the rooftops in Ewe Hai Street during the Great Fire of Kuching in 1884, warning the people and summoning rain to put out the fire. (Photo by The Marian)

Ong Ewe Hai, whose father emigrated from Fujian, China, to Singapore in the first half of the 19th century, decided to plant his roots in Kuching in the 1800s. He ensured that the house he was going to build for his family would have a clear frontage overlooking the Sarawak River and as such, he selected one of the highest spots, in the compound of the present Bishop’s House in Wayang Street.

The house, which was completed in 1885, was built with sun-baked bricks. In 1933, it was sold to the Anglican Mission for a few thousand dollars and converted into a boarding house of St Mary’s School. The boarding house was then taken over by the diocese in 1968 and used as a diocesan guest house until renovations started for the conversion of the property into The Marian Boutique Lodging House in 2013, according to themarian.com.my.

The Kuching Waterfront is a riverside walkway and the most popular gathering place in the city. The esplanade stretches for about 900m along the south bank of the Sarawak River, which is lined by food stalls as well as a restaurant and bistro. Various colonial-era buildings can be found there. The Chinese History Museum, Sarawak Steamship Building and Square Tower have since been repurposed for modern use. There is also a modern amphitheatre that showcases scheduled live entertainment.

During the day, the Waterfront offers scenic views of the north bank of the Sarawak River. The Astana Kuching and Fort Margherita stand out with their white exteriors, while the imposing State Assembly Building dominates the skyline. The entire stretch of the esplanade comes alive at night, with ethnic and contemporary songs and music from buskers, according to sarawaktourism.com. Located on the north bank of the Sarawak River opposite the Kuching Waterfront, Astana Kuching was laid out in the style of an English manor house. It is the third and last residence built by the Brooke Rajahs and was occupied by the reigning Rajah until the Japanese Occupation in 1941.

The imposing palace was built by the second White Rajah of Sarawak, Charles Brooke, in 1870 as a wedding gift to his wife, Margaret Alice Lili de Windt. It has occupied a significant place in the history of Sarawak and was the venue of the General Council’s meetings between 1873 and 1937.

Today, Astana Kuching is the official residence of the governor of Sarawak and is not open to visitors. During Hari Raya Aidilfitri, however, it welcome visitors in the best tradition of Malaysia’s open house practice, according to sarawaktourism.com.

(Photo by Sarawak Tourism board)

An old fort built by Charles Brooke in 1879, Fort Margherita was designed to protect Kuching from attacks by pirates and was named after Brooke’s wife, Margaret Alice. It has since been renovated and converted into the Brooke Gallery, which now showcases belongings from the Brooke family and artefacts during their time as the White Rajahs. The gallery is a collaboration between the State Museum Department, Tourism Cultural and Heritage Sarawak and the Brooke Trust, according to sarawaktourism.com. Built in 1871 as the seat of Sarawak’s government, The Old Courthouse was meant to replace an earlier wooden court house constructed in 1847, and was used for this purpose until 1973, with all Council Negeri meetings being held there since the fifth meeting in 1878.

The four blocks of buildings were influenced by Roman courthouse design, with magnificent belian (ironwood) roofs, massive columns enclosing outer galleries and beautiful detailing inside and out, reflecting local art forms. In 1883, a colonial-baroque clock tower was added to the building at the entrance area. The Old Courthouse was transformed into a Sarawak Tourism Complex in 2003, a cultural and art space that frequently holds exhibitions, concerts and other activities, according to sarawaktourism.com. Formerly known as “Kling Street” — Kling refers to Indian in Hakka — the name was changed to India Street under the Brooke administration in 1928, and the trading of mainly textiles and fabrics was started. The street got its name because of the many merchants from India who set up stores along it.

In 1992, the street was converted into a pedestrian mall. The historical street is now lined with shops selling all kinds of goods, particularly textiles, according to freemalaysiatoday.com.