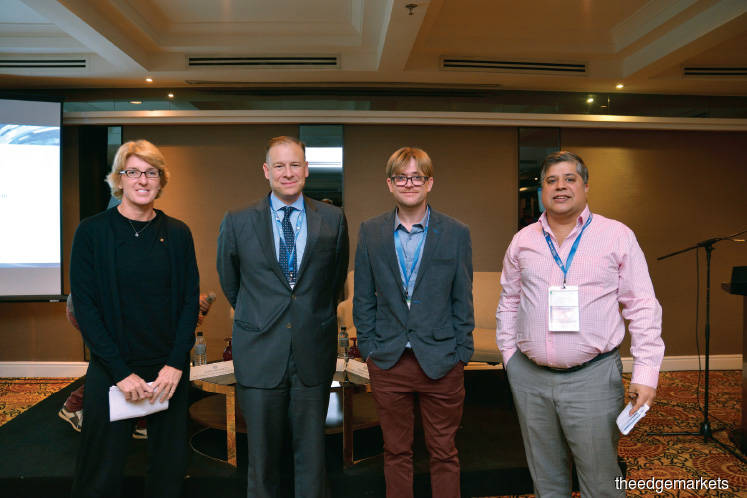 In most countries, including Malaysia, cryptocurrencies are not regulated simply because they are not recognised as legal tender. However, central banks around the globe have started to recognise them as risks, in large part because of their extensive use in money-laundering schemes, to say nothing of terrorism financing.

Consequently, different jurisdictions are taking different approaches to tackle the problem as they see it. For instance, although the US Financial Crimes Enforcement Network does not regulate cryptocurrencies directly, it regulates the intermediaries, which include trading platforms, exchanges and entities that generate cryptocurrencies in exchange for fiat money.

According to Rohan Bedi, managing director of consulting firm Combating Smart Financial Crime Singapore, the stance taken by regulators on cryptocurrencies and their follow-through actions are important as they will have an impact on the prices of digital coins. This, in turn, will affect the investors in these currencies.

For example, cryptocurrency prices tumbled across the board on Sept 4 after it was reported that Chinese regulators had banned companies from raising money through initial coin offerings, referring to them as an unauthorised fundraising tool that may involve financial scams.

Some central banks, such as the Monetary Authority of Singapore (MAS), have been quite supportive of the cryptocurrency market, even going as far as working on projects involving the currencies’ underlying technology — blockchain. “MAS is working on a distributed ledger project that uses blockchain for various end goals, including Know Your Customer (KYC), trade finance, fixed-income securities trading and settlement, reinsurance and the creation of a central bank digital currency to be used for cross-border payments,” says Bedi.

He adds that while MAS does not regulate cryptocurrencies, the regulator observes that the function of digital tokens has evolved from being just a virtual currency. Therefore, the offer or issue of digital tokens in the island republic will be regulated by MAS if they constitute products regulated under the Securities and Futures Act (Cap. 289).

“To me, this should be viewed positively because it means that regulatory bodies are not declaring cryptocurrencies illegal. The message is very powerful and is beneficial in terms of the development of the cryptocurrency market,” says Bedi, who was speaking on the sidelines of the 9th International Conference on Financial Crime and Terrorism Financing in Kuala Lumpur recently.

Meanwhile, Bank Negara Malaysia has announced that it will introduce guidelines on cryptocurrencies by year end.

“The blockchain for bitcoin specifically is transparent. But if you do your transactions via wallet-to-wallet transfer and pay in cash, they cannot be traced. In those transactions, the identities of the buyers and sellers can be concealed,” he says.

Some cryptocurrencies even have built-in measures to ensure anonymity by hiding the sender, recipient and value of the blockchain, says Bedi. For example, Zcash transactions use special encryption to maintain their privacy. Dash uses its Darksend feature to mix coins, helping to anonymise the transaction process. Monero uses stealth addresses mixed with one-time ring signatures (group of cryptographic signatures with at least one real participant), cloaking transactions to effectively create an opaque blockchain.

“Bitcoin, Ethereum, Ripple, Bitcoin Cash and Litecoin are all high market capitalisation digital currencies. They already have first-mover advantage. Therefore, new cryptocurrencies would have to find a way to attract attention, and making them opaque is one of them. Users value the privacy that they afford,” says Bedi.

During a panel session at the conference, titled “Cryptocurrencies: Friend or Foe?”,  Thomas S Dougherty, the US Department of Justice’s legal adviser for cybercrime in Asia, categorised digital currencies as a foe, saying that the dark web — infamous for illegal trades and for platforms used by paedophiles and terrorists — exists primarily because of cryptocurrencies.

When it was still operating, transactions on the Silk Road — an online black market launched in February 2011 — was mainly conducted using bitcoins. Dougherty says the platform, which can be used to buy anything from drugs and guns to fake documents was taken down by the Federal Bureau of Investigation (FBI) in 2013.

“At the time, there were only 4,000 vendors operating on the Silk Road. However, in July this year, the FBI was involved in taking down Alphabay [another online black market], which had 240,000 listings and 40,000 vendors,” he adds.

According to a Forbes report in October 2013, when the FBI arrested alleged Silk Road owner Ross William Ulbricht, more than 26,000 bitcoins (worth US$3.6 million at the time or US$154 million at press time) were seized.

Dougherty says US law enforcement is still trying to figure out the amount of money made by the alleged creator and administrator of Alphabay, who committed suicide while in custody.

In the area of terrorism financing, Dougherty cited the case of 17-year-old Ali Shukri Amin, a US citizen who was sentenced to 11 years in prison in 2015 for using his Twitter account to instruct a militant group on how to use bitcoin to mask transactions.

As at Oct 23, online cryptocurrency site CoinMarketCap.com lists 1,189 digital currencies with a market capitalisation of US$168 billion. With the abundance of cryptocurrencies available, it could be difficult for investors to make informed decisions.

To be safe, investors should always invest in cryptocurrencies with ongoing liquidity, says Bedi. These include the top five cryptocurrencies in terms of market capitalisation — bitcoin, Ethereum, Ripple, Bitcoin Cash and Litecoin.

“Also consider putting small amounts in new cryptocurrencies that you believe have the potential to do well. Cryptocurrencies are highly volatile. So, unless you are a professional trader, your approach should be a long-term one — 5 to 10 years, for example,” he says.

“Some people may say that for cryptocurrencies, even a six-month period is considered long term. But they are talking about cryptocurrencies that are likely to shut down after a certain period, whereas I am referring to those that are already established and have a high theoretical value. For these coins, it is best to hold and reap long-term returns.”

Additionally, investors should always buy cryptocurrencies through fully regulated exchanges such as Coinbase and Kraken, says Bedi. However, these investors should remember to transfer and keep the currencies on their own fully encrypted digital wallets on their personal computers instead of leaving them on the exchanges.

“It is also important to ensure that the personal computer is secured with a proper firewall, anti-virus and malware protection. A proper backup of digital keys and passwords to the wallet should be taken wherever needed. Also play safe by sticking to the official digital wallet recommended by the cryptocurrency developer,” says Bedi.

“And do not download files attached to emails from sources you do not trust or are not familiar with. Be aware of the Cerber ransomware, which steals bitcoin wallets and passwords and attacks via malicious attachments in phishing email.”