A cry for decisive action 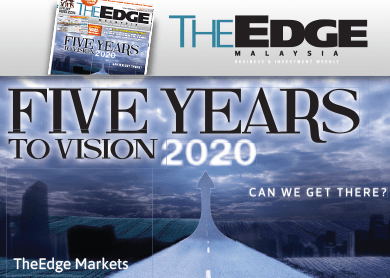 KUALA LUMPUR (Dec 20): The key challenge that Malaysia faces with five years left before the year 2020 is that without national unity compounded with right-wing racial and religious forces attempting to divide Malaysians for their self-serving political agendas, Malaysia stands no chance to make it economically, according to the Edge weekly in its latest 2014 Bumper edition.

The Edge weekly said it spoke to corporate and thought leaders including elder statesman and former Prime Minister Tun Dr Mahathir Mohamad, who shared their concerns as the Edge revisited its special 32-page State of the Nation report in the Feb 3 issue earlier this year.

The magazine had then highlighted some of the potential risks the country will face in 2014, including a high level of household and government debt, weakening corporate earnings and eroding competitiveness.

The Edge had also said Malaysia had a two-year window to fix the problems but with a caveat — “any sharp rise in US interest rates (which hasn’t happened) or a major decline in oil and commodity prices (which has happened) will quickly reduce this two-year grace period”.

In its latest edition, the Edge said the two-year window has just narrowed as oil prices have plunged nearly 50% in the last four months.

Speaking of his concerns, Dr Mahathir told The Edge that his worry has for a long time been about policies.

“It is the right of the prime minister to change policies, and when you change, of course, you expect things to be better. But unfortunately, I think the change in policies is not going to beneﬁt Malaysi,” the Edge quoted the former PM as saying.

It said Mahathir said while people talked about 1Malaysia, but the fact was that the different races still think about their own race — the Malays about their position, the Chinese about their education and culture, and the Indians feel that they are sidelined.

It also reported Mahathir’s concerns over economic policies, where he said that in the past the country wanted to learn how to do things by itself and the policies were directed towards building up Malaysia’s industrial capability.

“But today, it is not about building up Malaysia’s capability, but rather to have policies which are popular. When we don’t encourage the local industry [and instead] buy from abroad at a cheaper price, there is an outﬂ ow of money and, worse still, industrial capacity will not grow.

“Because of that, our indigenous capability has deteriorated, whereas we know other countries always protect their own industries,” it quoted him as saying.

Mahathir also spoke to the Edge on the impact of the lower crude oil prices,where he said there were both positive and negative aspects.

For more insight into Mahathir’s and other corporate figures’ thoughts on what Malaysia needs to do achieve Vision 2020, as well as other stories including Best Deals of the Year, Turkey of the Year and the capital market outlook for 2015, read the Edge weekly Bumper edition for the week of Dec 22 to Dec 28.