Creative use of space 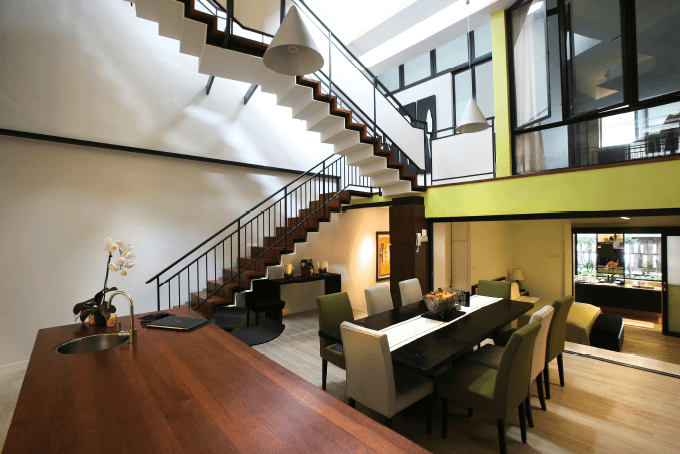 THE terraced houses in the busy suburb of Bangsar Baru are quite old and, unless recently renovated, boast a very similar — and old-fashioned — layout. It takes quite a visionary mind to completely turn an existing design on its head and to think completely out of the box, creating a completely new home that bears almost no similarity to what once stood in its place. David Tan is one such homeowner who has managed to create an incredibly spacious and airy abode within the limited constraints of a traditional terraced house plot.

What’s interesting is that Tan and his wife did all this without the help of an architect. “The architect I initially hired failed me,” he says, nursing a teh tarik in his sun-drenched dining area. “So, I went straight to my contractor and told him what I wanted. A lot needed to be re-done because I am a stickler for details, so a six-month job eventually took nine months. But the results are definitely worth it.”

The changes were drastic, to say the least. First, Tan removed the entire second storey landing to create a ground level with double volume height. The master suite on the second storey was then split into two guest bedrooms, and Tan raised the ceiling of the house to fashion a third storey. What was once a split-level dining and kitchen area was combined into an open-plan space, and the living area, located at the front of the house, was transformed into the master suite. This particular decision is most unusual.

“My theme is a resort-feel city home, and the ID (interior design) centred on that concept. I also had a few very important considerations when it came to the design — most important is good ventilation, as I have very sensitive sinuses, and I wanted the house to be bright and airy,” Tan says, ticking points off on his fingers. “Everything must be simple, functional and practical. There must be greenery as much as possible too, and everything should be as least artificial as possible.” It’s why creepers are allowed to grow at will, wooden surfaces to age gracefully and stone floors to fade in all the right places — small touches that make a huge difference in creating a lived-in and welcoming home.

Despite being an intermediate unit, Tan’s home is remarkably sunny and bright — a clever play on spaces and staircases allow plenty of sunshine to stream through, while cleverly placed windows in open spaces and bedrooms do what they can to let in the light.

The industrial feel that Tan wanted outdoors is tempered with the warmth of wooden fittings and furniture inside the house, a lot of which were personally sourced from Thailand. Similarly, the starkness of the all-white kitchen is softened considerably by a timber-topped island bar, which also serves as a workspace for Tan. Although his first preference was timber flooring, a nagging termite problem in the area made it impossible — so the alternative is a delightfully tactile vinyl flooring in strips that resemble wooded panels.

Tan relied on the natural incline of the land to create his intimate and cleverly placed master suite, which is accessible from the entry corridor and separated from the open-air dining area via foldable doors. It is a plush and comfortable space that overlooks the street ahead through cement brickwork, with lush foliage planted in its way for added privacy. Cement-finished his-and-her sinks also look out to this patch of greenery, and is right next to an indulgent sunken shower in a corner.

Although the unusual location of the master suite is interesting enough, it is the twin staircases in the dining area that really makes good conversation material. “It is why I call this the house of many steps,” Tan laughs. Not one, but two staircases emerge from the ground floor to access different sections of the upper floors — a wildly interesting design feature that’s also practical, and something he says he is especially proud of. “I entertain a lot and my two staircases get quite a bit of attention,” he quips. “They are also at an odd angle, which I specifically asked for — I like that it’s a little off centre … the imbalance creates balance.” 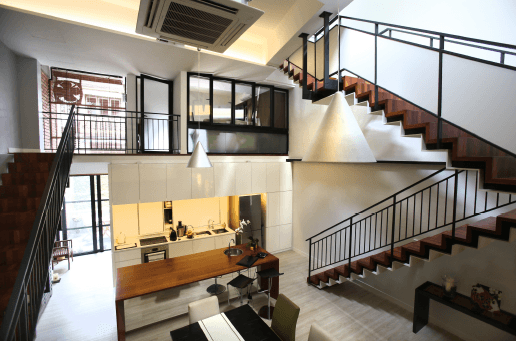 One staircase leads to a small television room for Tan and his wife — their two children live abroad — while the other connects the lower level to the two guest bedrooms, and onwards to another room on the third storey. Although Tan has no intention of selling the house, it has been designed in a way that makes it easy for any future residents to rearrange it to their liking.

The couple’s bedroom on the ground floor, for example, can be easily transformed into a living area while the TV room on the uppermost level, which has an attached bathroom, can be easily turned into a master suite. “I don’t plan to live elsewhere but if I do sell the place, it will be to an older family, perhaps in their forties or fifties. This isn’t a place for a young family with young children. That’s why even I waited till this age to build this house,” he grins affably.

Tan has kept to a simple and elegant décor, so the focus remains on the architecture of his home — fittings and furnishings in a neutral palette and wooden furniture is complemented by a simple and tasteful collection of art pieces, tapestries and Oriental-inspired accents. Inspired by his love for practicality, a lot of the walls double up as storage cupboards — a clever trick so household extras find neat and accessible homes.

An exposed brick wall at the back of the house, a popular spot for smokers to converge at, is just showing signs of being overtaken by a deep green creeper — Tan hopes that in a few months, its conquest would be complete. “I love the idea of the plants coming in from the outside, and I made sure the wall had deep-enough rivets from the start so this could happen,” he says, stroking the ivy leaves affectionately.

Small spaces don’t always have to mean small homes, as Tan and his wife have proven with their spacious abode. By cleverly manipulating spatial concepts and placing practicality and comfort in the service of style, the most limiting of spaces can yield the most miraculous results.