Creating moments of happiness amidst the MCO gloom 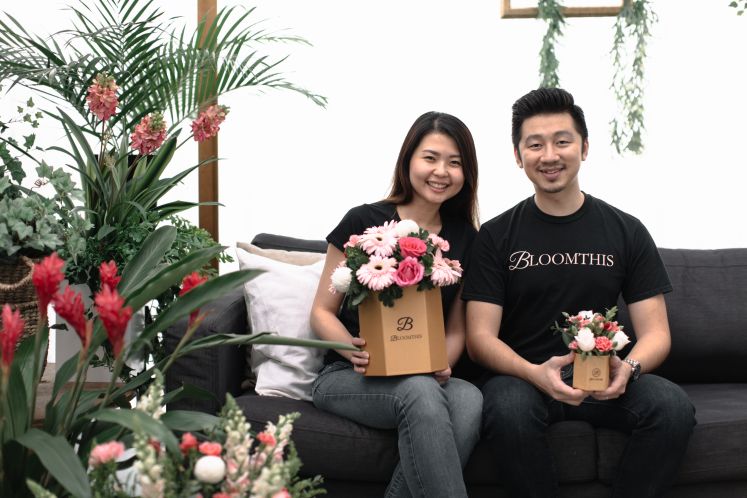 CEO and co-founder of BloomThis Flora Giden Lim with Penny Choo, his wife and business partner.

When the Movement Control Order (MCO) was announced in March, like other businesses, BloomThis Flora Sdn Bhd, (bloomthis.co) was badly hit. Just coming out of the lucrative Chinese New Year and Valentine Day’s period, it saw its revenues drop to almost zero. It could not get a supply of flowers from abroad for its artisan handcrafted designer flowers because of movement restrictions.

And it was only allowed to operate at half capacity.

But what made this company different from a regular gift delivery service, says CEO and co-founder Giden Lim, is that it had layered in technology through every aspect of the business and actually come up with ways to extend its product line at the end of last year, before all this hit.

And it was this foresight that saw it through this incredibly difficult period.

“Our products range from fresh to everlasting flowers, that is, real flowers that are preserved through special methods so they last for two years or more.

"We have extended our product range to beyond flowers; we also sell cakes, chocolates, balloons, beverages, ice-cream and plush toys. Basically, it comprises products that are actually uniquely designed for gifting.

“And one of our strengths is our ability to deliver on demand. We do same-day deliveries. So people can come to our site and make a purchase online and can get their products within four hours,” he says.

Lim says the company’s main strengths is its operational excellence and its ability to deliver a high quality experience for its customers, even at scale, when massive orders are concentrated on one day or one period of time such as Valentine’s Day or Hari Raya Aidilfitri.

“We layer technology around our business, not just on the e-commerce front but also on the operational part of the business.”

Although Lim’s mother was a florist and he grew up around flowers, this was not his first career choice. He qualified as a pharmacist or as he wryly puts it, a “legal drug pusher”. In fact that’s how he met his wife, Penny Choo, who was also a pharmacist, and decided to swap drugs for flowers.

Choo would take care of the artistic side of it while Lim would handle operations. Their mission was to “create moments of happiness” for customers. “At that time our business was very simple. It was purely a flower subscription.”

A flower subscription? “People could come to our platform and subscribe to our flowers. We would deliver fresh loose-cut flowers to them on a regular basis as indicated, whether weekly, bi-weekly, whatever. We still do that, but our on-demand orders now form the main part of our business.”

It was a typical start-up. “We were cutting flowers at home, taking out all the food from our refrigerator to put them in. My wife (girlfriend at that time) was designing the product and I was taking care of e-commerce and deliveries.”

From the time he was 10, Lim helped out at his mother’s florist shop, although “help” may be too strong a word. “Of course I was very young and didn’t know much. I was literally a nuisance she had to take care of, but I had the opportunity to learn the challenges of doing this as a business,” he says with a chuckle.

Growing up in Penang, he would help his mother open a stall at Gurney Drive on special days such as Valentine’s Day, when couples lingered hand in hand.

But he was wrong. “I thought at first, maybe it was because our site was really ugly. So I looked at how the international florists did it and tweaked our website. But the results were exactly the same.”

Apparently there is a science to this, one that he just could not figure out. So he went off to university, graduated and went into the pharmaceutical industry. “I left the industry five years ago to have another go at this business with Penny, who is now my wife. We thought of introducing a different concept of buying flowers.

“The flower subscription was our first business model. We have since changed the business model and extended our service and product line by listening to customers and trying to understand what they want,” he says.

This is how it was able to do the four-hour delivery. “It’s difficult to do this at scale, but we layer the technology around our operations. So basically the flower business is very operation-heavy. It’s very laborious. It’s like a production where you have a lot of raw materials, that is, the flowers, and you
have a design element that comes in.

“After you conceptualise the design, you use the flowers to create the product. Then you figure out the logistics, how to make sure you can deliver on time and keep the flowers fresh. And that’s not including the digital part, that is, how to reach out to customers online, how to build trust in your brand. Every part of the business has a technology element to it so we are able to scale it, handle the operations smoothly and then ultimately, give customers the best experience possible,” he says.

The company was actually doing very well in the first few months of this year, until the MCO was announced. “At the time, I drew out five different scenarios and action plans. But we stood by our core, which was to create moments of happiness for people. Flowers were just a medium to do that and we had already extended our product line, initiated partnerships with different vendors.

“So when the MCO happened, we continued to execute the plans that we had around food products like cakes and ice-cream, bundling them with the flowers,” he says.

Lim adds that because of the travel restrictions, the company could not get its supply of flowers from overseas. It had to rely solely on local flowers.

“We had to tell our customers that we had to substitute flowers in certain products because of the MCO and I have to say, they were all very supportive and understanding.”

The company also had to increase its communication with the flower farms in Cameron Highlands to ensure that it could get an adequate supply from them.

“What I’m trying to say is that the flower part was difficult to manoeuvre. It was the food business, like the cake, chocolate, ice-cream and hampers, that saw us through.”

The Conditional MCO was announced just when Mother’s Day and Hari Raya Aidifitri were around the corner. “We were able to send our flower bundles during the Raya period. Things gradually started to pick up for us and as of now, our revenues are even better than they were before the MCO. But as I said, this is a seasonal business, dependent on special occasions.”

Lim adds that it was able to survive not by pivoting so much, but by staying true to its core mission, and carrying out plans that had already been put in place from before.

Technology, of course, formed a major part of its strategy, but because the company recognised the importance of digital transformation from an early date, this was not something it incorporated at the last minute, but a consistent strategy throughout.

“We are moving into the third quarter soon and things are still uncertain so we can’t say we will sustain our income at this level because there are no celebrations during that time. But at least, we can operate back at the same capacity as before, because of the new product line.”

Lim says digital transformation continues to be an important focus to the business. “Seeing how my mother operated, I understand how difficult it is to scale a brick and mortar business. We concentrated on one aspect at a time and were able to digitally transform the business. We already had a technology infrastructure ready to help us with the difficulties of the operations during the MCO.”