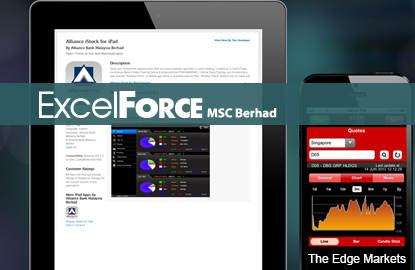 According to a filing to the exchange today, Brahmal had acquired a block of 11.5 million Excel Force shares on May 13, and a further 550,800 shares on May 16, bringing his total shareholdings in the company to 14 million shares, or a 6.7% stake.

Excel Force has been in the news of late due to few notable changes to its shareholdings structure.

Asia Internet Holdings Sdn Bhd, the single largest shareholder of My E.G. Services Bhd (MyEG), emerged as a substantial shareholder of Excel Force last month with the purchase of 38 million shares or an 18% stake.

The shares were purchased from Excel Force executive director Sun Chin-Chuan, through off-market trades. Sun is the spouse of the company's executive chairman and managing director Wang Kuen-Chung.

Jayakumar, 49, is the chief executive officer of PDX.com Sdn Bhd, which is involved in several electronic government projects.

Excel Force was issued an unusual market activity query by Bursa Malaysia on May 9 due to a sudden surge in its share price.