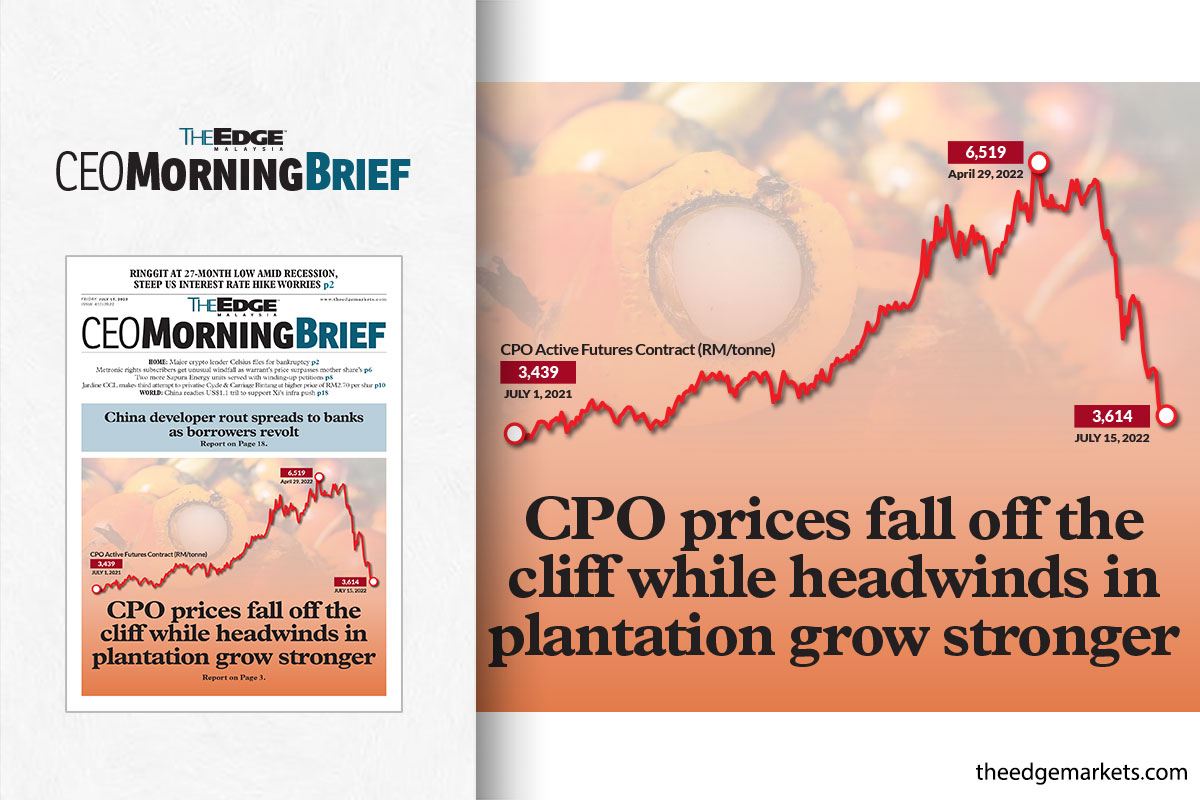 KUALA LUMPUR (July 15): The plantation sector, the darling of the market during the first half of 2022, has since seen a 180-degree turn in sentiment amid the sharp decline in crude palm oil (CPO) prices and persistent production headwinds.

Notably, active CPO futures contracts have dropped 45% from its April 29 peak, while the Bursa Malaysia Plantation Index has fallen 24% from its high on April 25.

September CPO futures stood at RM3,568 per tonne at the time of writing, while contracts for March 2023 have all retreated below the RM4,000-mark for the first time since January. Despite the decline in prices, MIDF Research believes that CPO prices will rebound and stabilise at RM4,000 to RM5,000 per tonne once the market fully assesses its inflationary fears and realises that there is still supply tightness.

Meanwhile, it also noted upside risks which include Indonesia increasing its maximum export levy when their local stocks normalise to US$240 per tonne from US$200 currently, and the potential B35 biodiesel initiative to spur domestic consumption.

MIDF Research has a full-year average forecast of RM5,500 per tonne for 2022, which is notably at the higher end of the RM4,500 to RM5,600 range expected by analysts covering the sector. For 2023, analysts anticipate a further decline in the full-year average to between RM3,400 and RM4,500 per tonne.

However, such prices would still be attractive, as industry estimates for CPO production costs stand at RM1,900-RM2,500 per tonne, after taking into account the elevated fertiliser prices.

The price expectations for 2022 and 2023 are also still higher than the federal government’s windfall tax threshold, which is applicable for CPO prices above RM3,000 per tonne in the Peninsular and RM3,500 per tonne in East Malaysia.

Prices aside, industry sources have said that companies are unable to monetise up to 30% of their local production due to the labour shortage, and Indonesia’s announcement to temporarily stop sending their workers here has made the situation worse.

CGS-CIMB regional head of agribusiness Ivy Ng sees the plantation sector being the worst hit by Indonesia’s worker freeze compared to other sectors, given its reliance on Indonesian workers, especially in the upcoming peak production months.

The research house estimates a shortfall of 75,000 to 100,000 workers in Malaysian estates.

“The delay could lead to palm oil production for 2H2022 falling below its level a year ago. The worker shortages, combined with rising costs (due to the minimum wage and fertiliser costs) and falling CPO prices, will be negative for 2H2022 earnings — posing downside risks to Malaysian planters’ earnings,” Ng said in a July 14 note.

PublicInvest Research analyst Chong Hoe Leong concurred. “Malaysia-based planters might see their output continue to be affected by severe worker shortage, and they have to fork out more attractive packages to lure workers from other industries,” he said in an email reply.

Indeed, Malaysia’s CPO production output in 2Q2022 is at multi-year lows, based on data by the Malaysian Palm Oil Board (MPOB).

MIDF Research expects full-year production for 2022 to be lower year-on-year, pointing out that most producers are seeing low fertiliser application due to the acute labour shortage, compounded by the impact of the wet weather.

“In addition to this, we believe that companies with land banks and mills that are balanced in terms of geography, such as Kuala Lumpur Kepong Bhd (KLK) and Sime Darby Plantation Bhd, would be operationally stable,” said MIDF Research.

However, quarterly earnings of plantation companies saw sequential declines in 1Q2022 versus the preceding quarter, despite higher CPO prices quarter-on-quarter.

The upcoming quarterly earnings will be a critical gauge of whether understaffed planters can capitalise on current prices, that are still above levels seen throughout the last decade.