Covid-19: No deaths for six consecutive days in Malaysia 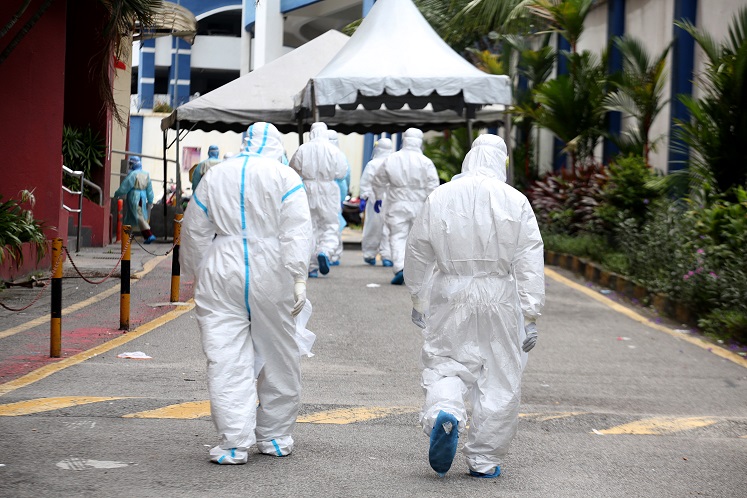 This is a round-up of Covid-19 related matters in Malaysia and globally from May 23 up to 12.30pm today. In Malaysia, case numbers have exceeded 7,000 and globally, the virus has infected more than 5.9 million people and caused over 360,000 deaths. More than 200 countries and territories are affected by the pandemic.

KUALA LUMPUR (May 29): Following the shocking three-digit spike in new Covid-19 cases on Monday and Tuesday, the number plunged to 10 yesterday — the lowest-ever figure recorded since the Movement Control Order (MCO) was enforced on March 18.

Over the past six days in a row, no fatality was reported and as of noon yesterday, the death tally remained at 115 or 1.51% of the total cumulative Covid-19 cases in Malaysia which now stood at 7,629. Currently, there are 1,345 active cases.

The 10 new cases reported over the 24-hour period up to noon yesterday comprised local transmissions with non-citizens accounting for five of them.

Eighty-six patients were discharged yesterday, bringing the total number of recovered cases to 6,169, which translates into a recovery rate of 80.86%. Eight patients are currently being treated in intensive care units, with four of them requiring ventilatory support.

On Wednesday, 15 new Covid-19 cases (including six imported) were reported, out of which nine involved local transmissions — this was the first time since the MCO was enforced that local transmissions had dwindled to a single-digit figure with four of them involving non-citizens.

Health director-general Datuk Dr Noor Hisham Abdullah, during his daily media conference on Wednesday, reminded Malaysians that the war against Covid-19 has not ended yet and urged them not to throw caution to the wind.

He said the Ministry of Health (MOH) expects a new wave of cases if most people do not comply with the standard operating procedures (SOPs) set by the government.

SOP-compliance is absolutely crucial in view of the fact that a large number of Covid-19 positive cases are asymptomatic. This finding, shared by MOH on its official website, is based on Covid-19 screenings carried out on tahfiz school students and wet market workers.

During screenings carried out at 378 tahfiz schools and madrasah, 15,000 samples were collected and 684 positive cases were detected, out of which 588, or 86%, did not show any symptom of the disease.

As for screenings involving wet market workers, 271 were found positive but 234 of them or 86 percent did not show any symptom.

These results are worrying as asymptomatic Covid-19 positive people can unknowingly infect others.

Incidentally, Prime Minister Tan Sri Muhyiddin Yassin himself is now undergoing a 14-day quarantine because an officer who attended a post-Cabinet meeting at the Prime Minister’s Office last week had tested positive for Covid-19.

The sharp spike in new cases on Monday (172 cases) and Tuesday (187) initially came as an unsettling shock but a breakdown of the statistics revealed that most of the new infections involved foreigners detained at three immigration detention depots.

“It is part of the government’s targeted approach to stem the transmission of Covid-19,” he said, referring transmissions.to the case detection measures.

Out of the 187 new cases reported on Tuesday, 10 were imported and the remaining 177, local

The locally-transmitted cases comprised 173 foreigners (including 155 detected at the Bukit Jalil  DTI and 13 from the Cheras security guard cluster) and four Malaysians.

Out of the 172 new cases reported on Monday, five were imported and the remaining local transmissions. The 167 locally-transmitted cases consisted of 159 foreigners (including 112 detected at Sepang DTI, Bukit Jalil DTI and Semenyih DTI) and eight Malaysians.

The overall drop in local transmissions is due to the various public health measures implemented by the government under the MCO and conditional MCO. Public compliance with the new normal and business sectors’ adherence to the SOPs have also helped to keep new infections under control.

The World Health Organisation (WHO), meanwhile, has warned that nations that have recorded a reduction in Covid-19 cases may see a second peak of infections if they lift measures to halt the outbreak too soon.

WHO Health Emergencies Programme executive director Michael J. Ryan told a media briefing on Monday that the world is currently in the middle of the second wave of the pandemic.

“Epidemics often come in waves, which means that outbreaks could come back later this year (influenza season) in places where the first wave has subsided,” he warned.

According to CoronaTracker (which cites figures from various agencies such as WHO), the total number of Covid-19 cases worldwide now stood at 5,900,765 and deaths, 361,776. A total of 2,577,225 people have recovered from the disease.

The United States continues to top the list of countries with the highest number of infections at 1,768,346 cases and 103,330 deaths.

Another Latin American nation recording a substantial number of cases is Chile with 86,943 cases and 89 deaths.

Other nations with substantial Covid-19 cases include:

According to the WHO website, its China country office was informed of cases of pneumonia that were detected in Wuhan on Dec 31, 2019. On Jan 7, the Chinese authorities confirmed that the novel coronavirus can be transmitted from human to human.

A study of the virus’ genetic sequence suggested similarities to that seen in snakes and bats. China health officials identified the Huanan Seafood Market in Wuhan as the source of the transmission of the coronavirus.

On Feb 11, WHO announced the official name of the virus, Covid-19, which is an acronym for coronavirus 2019 — CO stands for corona, VI for virus and D for disease.

On Jan 30, WHO declared the coronavirus outbreak as a global emergency. By then, it had spread to 18 countries and caused 170 deaths. On March 11, Covid-19 was declared a pandemic by WHO.

WHO has described the Covid-19 outbreak as 10 times more dangerous than the A H1N1 Influenza, also known as Swine Flu.

Swine Flu, which occurred between January 2009 and August 2010, infected more than 1.6 million people and caused 18,449 fatalities.

The International Monetary Fund has warned that the global economic recession caused by the Covid-19 pandemic will be worse than the Great Depression of the 1930s.