Anthony Loke: ‘You cannot be popular all the time’ 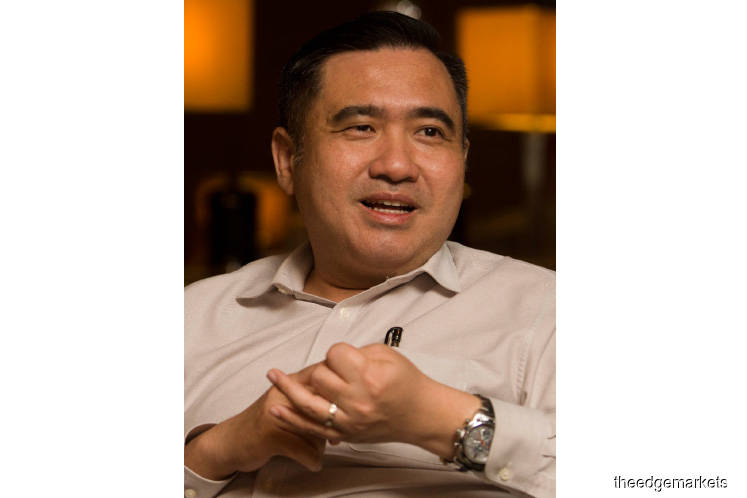 Cover Story: ‘You cannot be popular all the time’

OVER the past year, Transport Minister Anthony Loke Siew Fook’s life has largely revolved around meetings and briefings with the 30 or so agencies under his portfolio.

Some of the entities, such as Jabatan Pengangkutan Jalan (JPJ), Prasarana Malaysia Bhd, Keretapi Tanah Melayu Bhd (KTM), Malaysia Airports Holdings Bhd (MAHB) and the ports, are large organisations that are grappling with many issues.

Nevertheless, Loke shares with The Edge some of the plans formulated for the sector and how he hopes to implement them. The following is an excerpt from the interview.

The Edge: What do you think about the pace of reforms this year? How has it been?

Anthony Loke Siew Fook: Well, if you look at our various initiatives and reforms, of course, some people may say that things have not happened as fast as they wanted, but if you look at the decisions and the changes we have made in the past year — I would say that having been in parliament for the past 11 years — they have been spectacular.

Does it worry you that you are losing your popularity?

When you are in government, you must always be bold enough to face unpopularity. You cannot be popular all the time. Some decisions, some pace of reforms will definitely upset some people. So you will face some drawbacks, but if you don’t take that risk, you will never go far. But I think over the next few years, if we can show the results, with better governance, better life for the people, at the end of our term, I think we are confident of winning the support of the people.

How has it been for you, your one year in office?

It has been an exciting one year. Of course, it has been a very steep learning curve, first of all because we are new in government, a lot of the procedures, the workings of the ministries, but I’m thankful because I’m not a first-term parliamentarian. I have been in parliament for 10 years, so even though I’m new in government, I do have some experience in terms of knowing the functions and how government departments work. But, of course, the running of a ministry is never an easy task.

There are so many agencies under us — 30 in the Ministry of Transport.

To cut a long story short, is it possible for AirAsia to have its own airport?

You said airlines should not operate airports but can investors in airlines invest in airports?

Khazanah Nasional owns MAB (Malaysia Airlines Bhd) and controls MAHB, so could Tan Sri Tony Fernandes as an investor own an airport?

If AirAsia wants to operate an airport exclusively for AirAsia, it may not be possible. As for private investors, I think there is no clear distinction on that. I don’t foresee anything hindering that.

What is the status of RTS (rapid transit system between Johor Baru and Singapore)?

We are still in discussion [with Singapore]. We have another six months to discuss it. It is suspended and, in fact, we will sign a supplementary agreement with Singapore to suspend the agreement of RTS for six months, for us to have more room, more time to discuss the way forward and look at what is the best mechanism to implement it. So we have some time to deal with it.

We have to bring down the cost, that is why we want to renegotiate how we conduct the project and how we bring forward the project. That resulted in us needing to look at it again.

How about the issue with the Johor royalty? Is it major?

When it involves royalty, we would rather have a closed-door discussion. A behind-the-scenes discussion would be better.

The suspension is not a termination, right?

It is not a termination. If it is a termination, we will have to pay Singapore compensation. In a suspension, it is just some abortive costs.

Will the federal government allocate funds for the Penang Transport Masterplan?

As far as the PTM is concerned, the financing model is there already. It is self-financing. Part of the component of the PTM is to reclaim land, so they can sell the land for industrial purposes to finance the whole PTM.

Is the Gemas-Johor Baru double-tracking line a game changer for KTM?

It is doing well because number one, it’s comfortable, there is safety compared with the bus.

Can we look forward to a profitable KTM?

Of course, it is possible.

Are more inspection bodies like Puspakom going to be set up?

My position is very clear. From our days in the opposition, we have always advocated that there should not be monopoly in a regulated industry like this. It should open up for more efficiency and competition, but the fact is that there is a concession for Puspakom, which we cannot pull out right now, so we cannot award another licence.

Puspakom’s licence is until 2024. This is the second time the concession was given. The first was given in 1994 for 15 years. It ended in 2009 but they (Puspakom) got another concession for 15 years.

So unless we are willing to pay DRB-Hicom compensation, we cannot open up [the vehicle inspection business].

What is your view on Malaysia not having any container shipping assets?

As much as we want a big local shipping line, the fact is, over the past one year, the shipping industry has been consolidating. So there are alliances now, there are three major alliances right now. So everybody is talking about economies of scale. If you want to create a big shipping line, you need investments, and we are not advocating that the government come up with the capital and create a big shipping line. We do not need it right now, we are not in a position to have that right now, so it very much depends on the private sector. But how many private companies are willing to invest that kind of money now?

It is a very competitive industry and it has been consolidating. I think they are all talking about big alliances right now, and they are talking about even further consolidation. So the bigger players will take over the smaller ones. My focus now is attracting shipping lines to Malaysian ports, to make Malaysian ports a hub. That would be my focus rather than having a Malaysian-owned shipping line.

Is Prasarana expected to generate profits?

Well, I think they have improved their numbers in the past six months or so, but it’s too early to tell right now. I think we need a little bit more time to look at the effectiveness. The new CEO has been very, very aggressive. Datuk (Mohamed) Hazlan (Mohamed Hussain) is very aggressive and we are in constant conversation and communication. We are always looking for ways to reduce costs further.