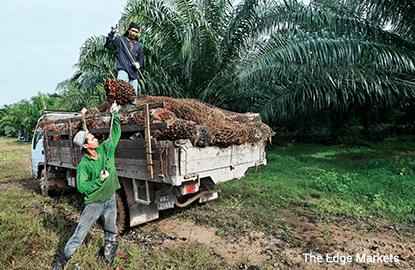 This article first appeared in The Edge Malaysia Weekly, on February 8 - 14, 2016

WHILE some may think the revised Budget 2016 lacked the punch needed to help Malaysia come to terms with slumping oil revenue, days after revealing the changes, Deputy Prime Minister Datuk Seri Zahid Hamidi surprised the market by announcing that the government will double its revenue collection from migrant worker levy charges starting almost immediately, on Feb 1. The upward revision to levy rates, he said, would add RM2.5 billion to state coffers. This means that the migrant worker levy could contribute over RM5 billion to government revenue if Zahid’s expectations are met. 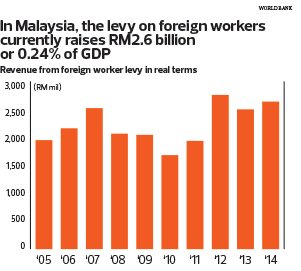 The levy mechanism is often justified on two grounds. First, the migrant worker levy was established to pay for the workers’ access to public services and infrastructure like healthcare and roads. Zahid said the latest hike will go towards paying for the benefits and make up for subsidised prices for food and other necessities meant only for Malaysians. Secondly, levies are said to regulate Malaysia’s dependence on migrant labour and push labour-intensive industries towards mechanisation. To achieve this, the government has raised the levy and shifted the burden of payment between the employers and employees several times.

Experience shows that levies have had little effect on migrant worker dependency in Malaysia. They were introduced in 1992 and increased in 1995, 1998, 2005 and 2012. It is worth noting that the migrant labour share of the Malaysian workforce rose sharply between 1990 and the early 2000s, from 3.5% to around 9.5%, despite the levy rates ticking upwards. The growth in the migrant workforce has slowed somewhat, but in 2014, it still accounted for 15% of the country’s labour.

The World Bank’s Malaysia Economic Monitor issued in December 2015 says: “Comparing the levels of immigrant populations by Malaysian regions with levy changes suggests that frequent revisions of the levy have not deterred employers from hiring immigrants, implying that such levies are not an effective incentive in the hiring process. Responsibility for paying the cost of the levies has also shifted several times, implying a lack of consensus on the purpose of the levies, which were originally implemented to tax foreign workers for the use of public goods.”

Meanwhile, Malaysian employers, who had never before experienced such a steep increase in rates and at such short notice too, have unanimously asked the government to reconsider its decision. Furthermore, the heftiest increases are for sectors that are traditionally labour-intensive and difficult to mechanise. The agricultural sector will see the levy rate more than triple to RM1,500 from RM410, that for plantation workers will leap from RM590 to RM1,500 while the rate for construction and manufacturing workers will double from RM1,250 to RM2,500.

Julia Goh, economist at United Overseas Bank (M) Bhd, points out, “I think the steep hike in levy rates is a serious aim by the government to cap the rising trend in migrant workers … as well as cushion government revenue with the additional RM2.5 billion. The previous rates were probably not significant enough to incentivise companies to automate labour-intensive operations. The latest hike brings the levy to 23% to 26% of the current minimum wage of RM800 to RM900.”

Some quarters are more sceptical about the impact of the levy rate increase, arguing that high taxes will discourage migrant workers from seeking employment in Malaysia through legitimate channels. The net effect of higher migrant worker levies could be negative. Rather than doubling its fiscal benefits through collecting more taxes, the government could be at risk of incurring additional costs, such as those associated with detention, food and deportation of undocumented workers. Last year, the Ministry of Home Affairs’ repatriation expenditure came up to RM26 million.

“The consequence of the rocket hike of levy might result in more undocumented migrant workers as it is too costly to be documented ones,” remarks Malaysian Knitting Manufacturers Association president Tang Chong Chin.

The World Bank report notes: “The higher the cost borne by the immigrant to get to a new country, the longer they have to stay abroad to recoup their investment to get there. Most foreign workers have limited resources in their home countries and see immigration as a way to improve their income (and overall economic conditions). But having to pay high fees often incentivises perverse behaviours, such as overstaying, in the case of documented workers, or entering the country illegally to avoid paying fees altogether.”

On that note, the government’s decision to increase the migrant worker levy also raises doubts about how well its planned Rehiring Programme under the revised Budget 2016, which will give undocumented workers valid work permits, will be received when it is eventually implemented. Details on the scheme are still scarce but the intention is reminiscent of the 6P amnesty programme implemented in 2011 to register undocumented workers. At the time, some 1.3 million undocumented workers were registered, out of whom 500,000 received legal approval to work in Malaysia.

However, the programme is said to have failed to stem the influx of illegal immigrant workers while certain intermediaries between employers and workers were blamed for taking advantage of loopholes in its implementation.

Liva Sreedharan, programme manager at Tenaganita, a non-governmental organisation advocating migrant worker rights, asks: “How many Malaysians do you know get the kind of pay a migrant worker does and are willing to pay the kind of tax he does to the government just to earn a living?”

This is just one of the many questions employers and migrant workers will be asking with regard to the huge jump in the levy.