Cover Story: What is Can-One’s endgame? 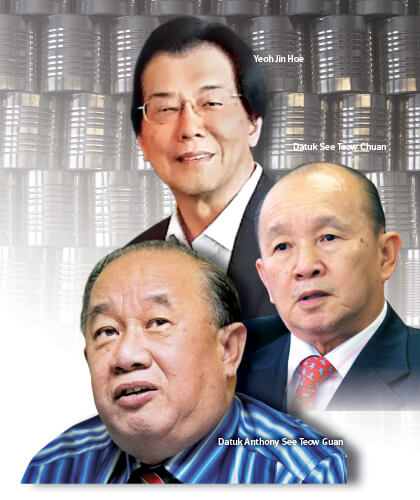 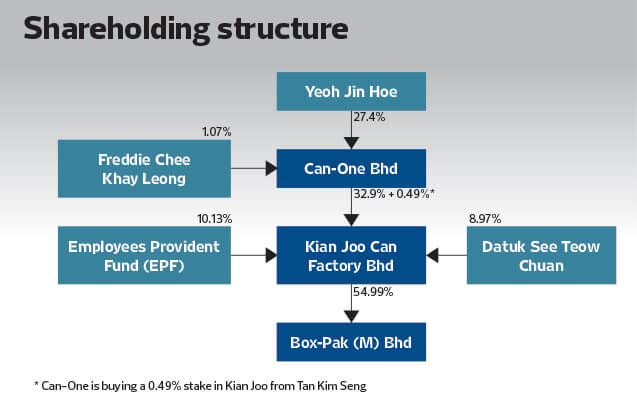 IT has been seven years since Can-One Bhd surfaced as a substantial shareholder in Kian Joo Can Factory Bhd with a 32.9% stake, but the bad blood between the two packaging giants has remained until now.

Intentionally or unintentionally, since its entry in January 2012, Can-One has continued to cause trouble for the already embattled Kian Joo.

From the much-publicised dispute on the disposal of the See family’s stake in Kian Joo in 1995 and the stepping in of KPMG Corporate Services Sdn Bhd to sell the block of shares — eventually to Can-One — to the controversial takeover offer for Kian Joo by Aspire Insight Sdn Bhd in 2013, there have been many twists and turns in the decades-old drama.

On Dec 13, Can-One told Bursa Malaysia that it had signed a conditional share sale agreement with Tan Kim Seng to buy his 0.49% stake in Kian Joo for a cash consideration of RM6.71 million or RM3.10 per share, which was at a hefty premium of 51% to its five-day volume weighted average price.

Upon the completion of the proposed acquisition, Can-One will see its shareholding in Kian Joo increase to 33.39% from 32.9% at present. Can-One will thus be obliged to extend a mandatory general offer (MGO) for the remaining 66.61% stake in Kian Joo it does not own at RM3.10 apiece.

Coincidentally, the Securities Commission Malaysia (SC), also on Dec 13, reprimanded and fined Can-One major shareholder Yeoh Jin Hoe and parties acting in concert (PACs) with him for failing to buy out Kian Joo’s minority shareholders after triggering the 33% MGO threshold.

While the SC did not reveal when exactly Yeoh and PACs triggered the MGO threshold, it is learnt that this probably happened two to three years ago.

The timing of the two announcements confused investors, who raised questions as to whether the MGO for Kian Joo should be launched by Yeoh in his personal capacity or by Can-One as a listed company.

In theory, both Yeoh and PACs, and Can-One are required to do the MGO.

Some corporate observers go as far as to say that Yeoh is actually using public money, via Can-One, to relieve himself of the responsibility to make an MGO.

When contacted by The Edge, the SC clarifies that the two cases are separate. “The administrative actions taken by the SC against Yeoh and his PACs are distinct from the proposed acquisition of shares in Kian Joo and the ensuing proposed MGO recently announced by Can-One. These proposals are a matter for the board and shareholders of Can-One to consider.”

It is worth noting that the SC also fined Yeoh and his PACs some RM455,000 and restricted the voting rights of the PACs in Kian Joo to not more than 33%.

In other words, the first case is considered closed, and the MGO has moved to the second case.

What should Can-One’s shareholders do?

Now, all eyes are on Can-One’s extraordinary general meeting (EGM) slated for Feb 14. Yeoh will have to make an extra effort to convince the company’s minority shareholders to give it the green light to launch the MGO for Kian Joo, considering that his and his PACs’ voting rights are restricted to 33%.

Should Can-One fail to obtain the approval, the proposed acquisition of Tan’s 0.49% stake in Kian Joo will not materialise.

Can-One said the proposal was part of its expansion strategy to consolidate its can-manufacturing business under Kian Joo in order to grow its sales and customer base, which would, in turn, improve its financial performance.

It added that it did not expect to incur additional financial commitments in putting Kian Joo’s assets and businesses onstream as the group already had ongoing businesses.

But the fact remains that Can-One still has to fund the MGO with internal funds and bank borrowings.

Although it is widely known that Yeoh had always intended to consolidate Can-One and Kian Joo, the MGO still came as a surprise to investors.

Why does Can-One, which already controls 32.9% of Kian Joo, want to pay a premium for additional shares in it? The result is an MGO, which would cost the debt-laden Can-One hundreds of millions to fulfil.

MIDF Research analyst Ng Bei Shan has a negative view of the MGO due to the steep price Can-One is paying. She also does not see any potential earnings accretion to the group.

“While the purchase presents an opportunity for Can-One to increase its shareholding in its associate, any additional earnings contribution would be offset by higher borrowing costs,” she writes in a Dec 14 report.

Ng points out that Can-One’s net gearing could rise to 2.19 times from 0.51 times upon full acceptance of the MGO as it will have to borrow to fund the acquisition. “Historically, Can-One’s net gearing has stayed below 1.0 times, save for 1.13 times and 1.24 times in 2007 and 2008 respectively.”

Ng also warns that the earnings impact of the 0.49% stake acquisition would be minimal and that it could turn negative if the MGO acceptance level is high. “Based on our estimation, the 0.49% purchase will not have a meaningful impact on Can-One’s FY2019 earnings but, depending on the MGO acceptance level, it will have negative impact in the range of -8% to -30% due to higher finance costs, which could possibly offset the higher earnings contribution from Kian Joo,” she writes in the report.

A corporate observer who tracks Can-One stresses that Yeoh must convince the shareholders of the value that could be created from raising the company’s stake in Kian Joo. “Can-One took over Kian Joo in 2012. Whether it is 100% or 33%, if the synergy was there, they should have been able to do it in the past six years. After all, it has representatives on the board. They have access to Kian Joo’s information. They are very much in control already. I don’t think they need 100% to reap benefits from the synergy,” he says.

A minority shareholder of Can-One says he intends to vote against the resolution at the EGM, claiming that the deal would only benefit Yeoh, not the whole company. “Why risk gearing up now? Kian Joo’s earnings have been declining. I just don’t see how Kian Joo is going to lift the financial performance of Can-One. So, why do the MGO?” he asks.

What should Kian Joo’s shareholders do?

Some may ask why Yeoh is willing to pay such a hefty premium for the 0.49% stake in Kian Joo. What is his rationale for it?

“I might consider selling. I think this could be a good opportunity to cash out. Kian Joo’s earnings performance has not been great and its dividend payout has dropped. I doubt its earnings will rebound dramatically this year,” says one of its minority shareholders.

It has not gone unnoticed that in recent years, Kian Joo, which is ultimately controlled by Yeoh, has been reluctantly paying dividends to its shareholders.

A corporate observer points out that Yeoh should benefit from Kian Joo’s dividend payout, considering that Can-One could use the money to pay the interest on its bank borrowings.

“Obviously, Yeoh is not keen (to receive the dividends) because he knows the See family still owns shares in Kian Joo. There is bad blood between them. That is the wrong mindset,” he says.

It is worth noting that in November 2013, Aspire Insight proposed to buy Kian Joo’s entire assets and liabilities for RM3.30 per share in a RM1.47 billion deal.

The company is owned 40% by the Employees Provident Fund (EPF) and 60% by an entity led by Freddie Chee Khay Leong, who was the chief operating officer and executive director of Kian Joo at the time.

However, the takeover bid was aborted in 2016.

Given that Aspire Insight had offered RM3.30 in 2013, which was deemed as undervaluing Kian Joo, should its shareholders accept Can-One’s offer of RM3.10 now?

“I don’t think Yeoh is so naïve as to pay such a premium for Kian Joo. I am sure he thinks the shares are worth much more than RM3.10,” says an industry veteran.

What is Yeoh’s endgame?

If we trace the Can-One and Kian Joo saga back to its beginning, the MGO cannot be deemed an isolated incidence. The chances are there is more to it than meets the eye.

It is hard to believe that the MGO is a misstep by a seasoned businessman like Yeoh.

What value can be unlocked in Kian Joo and Can-One? What possible back-to-back deals could be in the pipeline?

Whatever it is, to know the outcome, one has to know Yeoh’s endgame.

At press time, Yeoh had not responded to The Edge’s request for comments.

“Yeoh knows that Kian Joo is a gold mine; its assets have not been revalued since 2009. If the assets are revalued now, the valuation would be tremendous,” says a market observer.

Another market observer concurs. “Yeoh must have an agenda or somebody backing him. Just imagine, Can-One’s gearing is already quite high. If you want to take over the whole of Kian Joo, how are you going to fund the acquisition? Unless you have someone backing you and going to buy from you at a higher price later,” he says.

“If there is a will, there is a way. If someone is backing Can-One, the banks will definitely finance the acquisition. Because they know Can-One would have an exit plan.”

If that is the case, who could be backing Yeoh?

Sources The Edge spoke to do not discount of possibility of Toyota Tsusho Corp (TTC) — the trading arm of Toyota Group — coming back into the picture.

To recap, TTC had sent a non-binding letter of interest to Kian Joo in March 2014, stating its interest to buy a 51% stake in the aluminium can maker at RM3.74 per share. The offer was higher than Aspire Insight’s RM3.30 per share.

TTC, however, is perceived to have lost interest in the bid after Kian Joo’s board claimed that it was in no position to consider the non-binding letter of interest.

“Could Yeoh be quietly talking to Toyota? Over the past few years, he has been divesting shares and assets, unwinding his investments in Alcom and King Koil. Is he trying to build a war chest to control Kian Joo?” asks an observer.

After all, it is an open secret that Yeoh has an ambitious plan to form an integrated packaging firm that houses Can-One, Kian Joo and Box-Pak (M) Bhd, simply because there is no point in him running three separate companies whose core business is essentially packaging.

If Can-One’s MGO for Kian Joo is successful, perhaps the whole saga will finally come to an end.