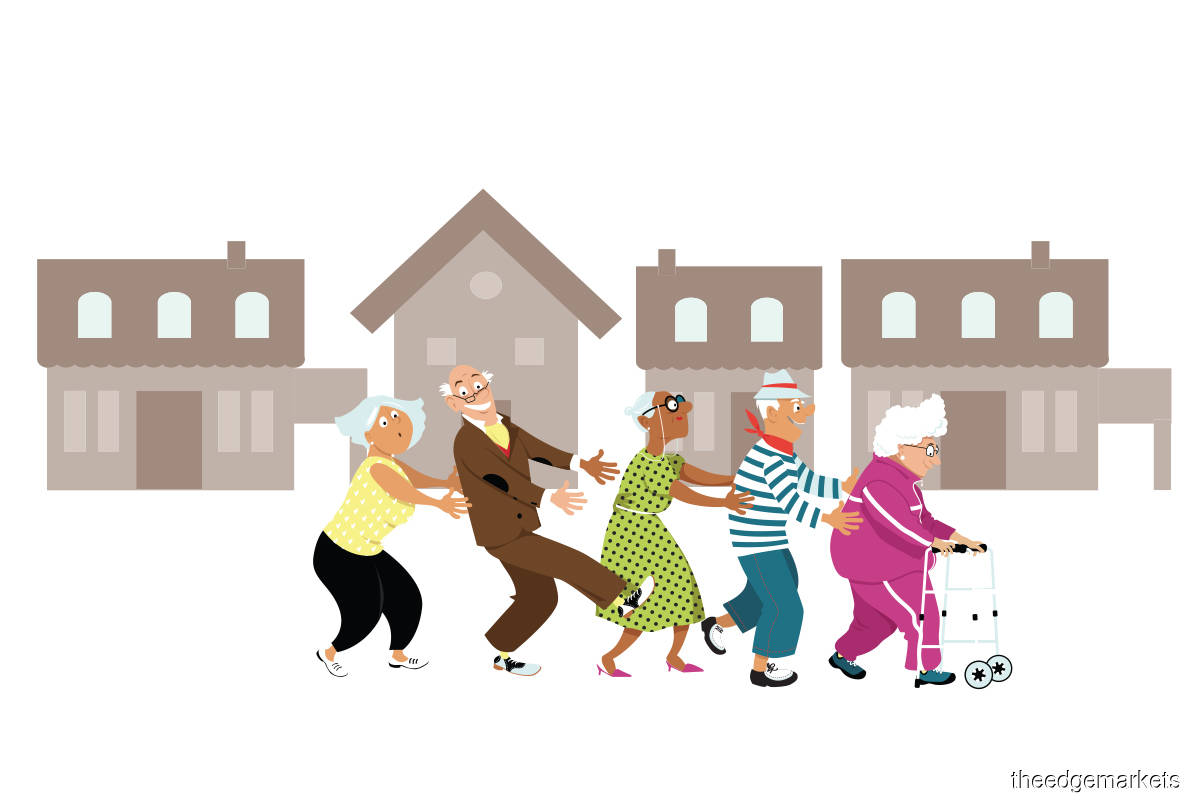 The topic of senior living has been widely discussed in Malaysia over the last decade. The National Policy on Senior Citizens defines senior citizens as those aged 60 and above, and there has been a proposal by the National Senior Citizens Advisory and Consultative Council last year to amend the definition to 65 and above.

Raine & Horne International Zaki + Partners Sdn Bhd associate director James Tan notes that while Malaysia is fast becoming a developed nation, it will also become an ageing nation by 2030, with 14.2% of the population being senior citizens. The figure will increase to 23.1% by 2050, owing to the increase in the life expectancy rate with the help of modern medical treatments.

“The past 10 years have seen a change in Malaysia’s age structure. The share of the population between 0 and 14 has been decreasing steadily, while the inverse is true for those aged 65 and above. The average age of the Malaysian population has reflected this trend, and is expected to reach 34.1 years in 2030, up from 28.2 in 2015,” he says.

Property consultants note that the growing ageing population and the declining younger population also mean a greater demand for dedicated senior care facilities in Malaysia. Many such facilities have been mushrooming in the Klang Valley in recent years. “We have also observed that many affordable private sector senior living facilities offering long-term care in Malaysia have a high occupancy rate. Many houses converted into assisted living and nursing homes, especially those in the vicinity of hospitals in the Klang Valley, are operating at full capacity. This situation indicates the need for more dedicated senior living facilities,” she says. Senior citizens living in Tuai Residence will have access to daily medical check-ups, as the developer has partnered with Australia’s Cality Care for homecare services, nurses and care on-site (Photo by Suntrack Development)

On average, Malaysians had a life expectancy of 74.9 years in 2019 as opposed to 60 years in 1960. Lau categorises the senior living services in Malaysia into four types based on the levels of wellness/medical care, facilities and accommodation. The first type is specialised services, such as senior living facilities for patients with dementia.

“The prevalence of dementia in Malaysia is at 0.126% of the total population today, which is double that in 2005 (0.063%). This figure is projected to quadruple to 0.454% in 2050. The traditional aged-care facilities in the form of ‘community housing’ may not be the most suitable, as those with dementia require medical attention and a safe environment,” Lau says.

“The second type is daycare centres, which provide care and company to senior citizens during the day before their children bring them home after a busy day at work. Next, for senior citizens who prefer to stay in homes, the Elder Care Resources website provides a list of services that offer nurses to help senior citizens partially in ensuring that they are fed, bathed and properly medicated and that their health is monitored.”

The final type is the latest trend — retirement villages. While it is not a new concept, JLL continues to see increasing interest in this subsector, owing to the aging population and decreasing number of family caregivers.

Nevertheless, property consultants observe that developing retirement villages may be a challenge in Malaysia. Tan notes that the challenges in developing and managing retirement homes include the relatively higher risk involved, the lack of policy support, the need for a suitable business model, and annuity and transfer issues upon death.

Lau agrees, adding that some of the existing retirement villages are not driven by market demand — especially from the financial and location aspects. She urges developers and operators, when determining rates, to first understand the size of the relevant target market or income group and their preferences through market studies and surveys.

“To contain costs and better ensure the viability of developing the facilities, some developers resort to building such facilities in remote locations, which may not always work out well if senior citizens are not willing to relocate to these areas, away from their families. One way to appease the filial piety-related stigma is to build these facilities close enough to residential areas,” she says.

“There are instances in which we advise our clients to consider refurbishing existing units instead of building new ones to manage cost. In fact, this may also help the overhang in certain areas.”

Property consultants have also seen expansions and new care centres set up in the past five years that offer a range of choices — from affordable to premium elderly care. Modern senior living facilities in Malaysia include Eden on the Park in Kuching, Sarawak; GreenAcres in Ipoh, Perak; Dementia Homecare Centre in Telok Panglima Garang, Selangor; and Lotus Care Premium Assisted Living in Petaling Jaya, Selangor.

According to Tan, while the Private Aged Healthcare Facilities and Services Act 2018 has been passed, the regulations have yet to be enforced. Currently, the Care Centre Act 1993 regulates senior living facilities in Malaysia.

Executive director John Chong hopes the government will come up with regulations for retirement villages in Malaysia, as there needs to be a new zoning category as well as age-related restrictions for such projects.

“The government has come up with the Private Aged Healthcare Facilities and Services Act 2018 to improve the standards in Malaysia. Unfortunately, the regulations spelling out the detailed requirements have not been released,” Chong says.

“The issue of financing for the elderly end-user should be addressed. Certain operational standards may also need to be codified. The government may also consider incentives to encourage more developers to enter this industry.”

Chong notes that there are very few purpose-built senior living facilities in Malaysia. The retirement village industry is also still very new in Malaysia and has not evolved much over the past few years.

Reminiscing about the time when GreenAcres was launched, he says there were two major challenges: public education and the lack of experienced professionals.

Most locals had not heard of such a concept back then and a lot of education through roadshows and publications had to be done. The opening of Phase 1 in September 2017 has attracted many visitors, who have since responded positively to the idea.

“Another challenge was getting experienced professionals to assist in bringing the project to fruition … The architects and interior designers in Malaysia have no experience in this area. Similarly, there were also no consultants in Malaysia to advise on the operations and management of retirement villages. We had to get the expertise from Australia.”

Chong cites financing and staffing as among the other challenges. The industry has a longer return on investment (ROI) period and lower ROI compared with other property development projects.

“This is why many developers have not jumped into this industry yet. If the government provides incentives, it would help overcome this challenge. Second, this is not merely a property play but, more importantly, it is also a service and hospitality business. As a result, the ongoing operations and management of a retirement village or senior living facility require proper staffing. Since this industry is new in Malaysia, there isn’t a ready pool of talent to tap into.”

GreenAcres started operations in September 2017 upon the completion of Phase 1. So far, about 40% — or two out of five phases — of GreenAcres has been developed and consist of 54 units with built-ups of 734 to 1,105 sq ft for independent living.

Half of these units have been booked by both local and international buyers. Currently, the occupancy rate is 40% and four staff — excluding the security guards and gardeners — run the retirement village.

Chong says plans for the remaining land in GreenAcres are to build additional units for independent living and an aged-care facility for assisted living. While the senior living facilities in Malaysia generally target the locals, Chong believes the country has great potential to be a retirement destination for foreigners, owing to the reasonably good amenities, facilities and infrastructure.

“We are free from many major natural disasters,  the cost of living is comparatively lower, and the people are friendly and welcoming of foreigners. These factors were recognised when Malaysia was listed among the world’s Top 10 places to retire,” he says.

Property consultants note that the strong take-up rate of the now-inactive MM2H programme as well as the country’s robust medical tourism sector have shown that foreigners are attracted to the idea of Malaysia being their retirement and medical destination.

Tan notes that the International Living’s Global Retirement Index 2021 has ranked Malaysia No 7 among the best places worldwide for retirement.

“[Foreign] retirees may enjoy a high standard of living with a relatively lower cost of living [in Malaysia] compared with their homeland. Those costs include housing price, rental price, basic necessities, transport cost and medical cost,” he says.

“Top-notch medical facilities run by highly qualified staff with a high proficiency in English are available in all major cities. Medical costs are relatively lower than many other countries and it would be a big plus point.”

Meanwhile, Lau observes that many senior citizens from the Western and Northern hemisphere are keen to retire in the East, including Malaysia, to avoid the cold winters and enjoy the more affordable healthcare facilities.

“In addition, we observed that senior citizens in foreign communities who may have few or no relations or live apart from their children are likely to be interested in living their remaining golden years in Malaysia, owing to our culture of taking care of senior citizens as well as our friendliness to international communities,” she says.