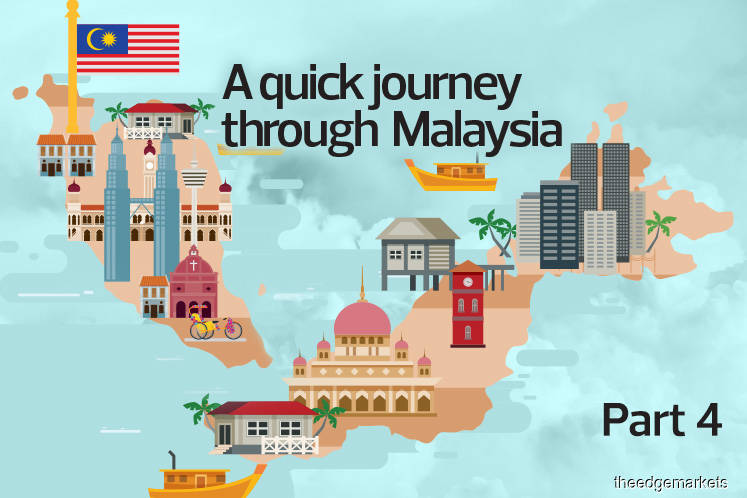 Kuching, The City of Unity, or better known as Cat City, is the capital of Sarawak. According to Sheda, a census by the Department of Statistic in 2010 showed that Sarawak had a population of 2.47 million while that of Kuching was 617,887. Malays, Chinese, Bidayuhs and Ibans form the major ethnic groups in the city, and reflect the cultural diversity across the state.

The city centre has well-preserved old buildings and the history of Kuching can be seen in their design and architecture.

Located on the north bank of the Sarawak River, the New Sarawak State Legislative Assembly Building was officially opened on July 27, 2009, by Sultan of Terengganu Sultan Mizan Zainal Abidin, who was then the Yang di-Pertuan Agong.

Set to be opened by the end of next year, the new Sarawak Museum will be the second biggest museum in the region after the 10,000 sq m National Gallery of Singapore.

Kuching is also famous for its national park and other green attractions. Much of the state’s flora and fauna are protected under various laws such as the Forest Ordinance 1954, Natural Resources and Environmental Ordinance 1994 and Wildlife Protection Ordinance 1998. Explore places like Bako National Park, Gunung Gading, Semenggoh Matang wildlife centre, Annah Rais and Panchor Hot Spring.

The Kuching Festival and Borneo Rainforest Music Festival are yearly events that attract massive crowds of locals and foreigners.

Pay a visit to the Sarawak Cultural Village to find out more about the indigenous tribes, and the Iban and Bidayuh longhouses for a taste of their cuisine, especially the jungle fern (midin), deer meat and tuak (local rice wine). Mention Sabah and most people think of the 4,095m-high Mount Kinabalu in Kinabalu Park, a world heritage site that boasts many varieties of flora and fauna. The mountain’s name comes from the Kadazan word “Aki Nabalu”, which means the revered place of the dead.

According to the official portal of the Sabah state government, the state’s population is made up of 33 indigenous groups who communicate in 50 languages and 80 ethnic dialects.

The Kadazan-Dusun is the largest ethnic group in Sabah, accounting for almost 30% of the population, while the Chinese make up the largest non-indigenous group.

Shareda notes that capital city Kota Kinabalu (KK) has the most active property market in the state with the total value of property launches last year amounting to RM3.4 billion. KK dominated 83% or RM2.85 billion of the west coast market.

Rich in nature with islands, mountains, rainforests and wildlife, the state is fast becoming a popular tourist destination. It was reported that the state’s tourism industry saw record-high tourist arrivals of 3.87 million last year.

Shareda adds that the increase in tourist arrivals has changed the property landscape with the home-sharing concept dominating the pattern of project launches, such as Bay Suites in Likas and The Crown Service Suites in KK. To date, 3,000 Airbnb units and 2,000 hotel rooms are in the pipeline or under construction to tap the tourism market for the next three years.

Some landmarks in KK include the Kota Kinabalu City Mosque and Jesselton Point Waterfront.

The Kota Kinabalu City Mosque occupies 2.47 acres in Likas bay and is exemplary of contemporary Islamic architecture. The floating white mosque boasts similar features to the Nabawi Mosque in Medina.

Formerly known as the Kota Kinabalu Ferry Terminal, Jesselton Point Waterfront is the main public ferry terminal to Labuan. It features snapshots of KK in the olden days as well as vintage red English phone booths. The royal town of Klang has been a site of human settlement since prehistoric times. The 19th century saw the rapid expansion of tin mining to cater for increased demand from the West.

According to Rehda Selangor, the Mahkota Puri Palace was built in 1889 in Klang to replace Istana Alauddin (Bandar Palace) in Jugra as the royal administrative centre. It served as the residence of Sultan Alauddin Sulaiman Shah. After he passed away in 1938, Tengku Alam Shah was enthroned as the new Sultan. The Mahkota Puri Palace was demolished to pave the way for the construction of  Istana Alam Shah in 1950.

Istana Alam Shah is the Sultan of Selangor’s official palace. Although he has two other official residences in Shah Alam and Putrajaya, most royal ceremonies are held in Istana Alam Shah.

The palace, built of wood and marble, has 15 rooms. In early 2000, extensive renovations were carried out by Sultan Salahuddin Abdul Aziz Shah.

Shah Alam was declared the state capital on Feb 14, 1974. It lies mostly within the Petaling district, with a small portion in neighbouring Klang district. Once known as Sungai Renggam, it was known for its rubber and oil palm estates. Its current name was given by Sultan Salahuddin Abdul Aziz Shah, after his father Sultan Hisamuddin Alam Shah.

It is the largest mosque in the country and the second largest in Southeast Asia. It also boasts the world’s biggest religious dome, which measures 167ft in diameter and is elevated 350ft above ground. The four minarets are 460ft tall and are the second tallest individual minarets and the tallest group of minarets in the world. Some of us would remember that Terengganu was previously spelt as Trengganu or Tringganu. The state, which faces the South China Sea, is best known for its Batu Bersurat, kites, leatherback sea turtles and outlying islands such as Redang, Tenggol, Kapas, Perhentian and Lang Tengah.

State capital Kuala Terengganu (KT) was granted city status in 2008. It is the only royal capital among the country’s nine royal states that bears its state’s name.

Rehda Terengganu notes that the iconic historical landmarks of the state include Kampung Cina and the Batu Bersurat roundabout. Literally meaning Chinese village in English, Kampung Cina is also called Teng Lang Po or KT Chinatown by the local people. As this was one of the earliest settlements of the Chinese community, the shophouses built along Terengganu River mirror the designs of their hometowns in China.

The Chinatown culture reflects a mixture of Malay and Chinese traditions and lifestyles as the majority of people here can converse fluently in the local Bahasa dialect.

Next to Kampung Cina is Pulau Warisan, which is a land reclamation project to turn part of Terengganu River into a riverside development with various tourism activities, such as river cruises and night markets. The integration of Pulau Warisan into Kampung Cina has created a vibrant city full of cultural values and racial unity.

The Batu Bersurat roundabout in Kampung Ladang, Kuala Terengganu, features a giant replica of the artefact at its centre. Found in Tersat River in Kuala Berang, Hulu Terengganu, in 1887, the original stone is one of the oldest testimonies to the advent of Islam as a state religion in the region. It is now kept in the National Museum of Malaysia in Kuala Lumpur.

Today, a more modern iconic landmark in Kuala Terengganu would be the Kuala Terengganu City Centre Drawbridge, which connects Kuala Terengganu to Kuala Nerus. Work on the construction of the bridge, the first of its kind in Southeast Asia, started in August 2014. It was opened for public use on Aug 1 this year.

The 638m bridge, which has not been given an official name, is part of the Kuala Terengganu City Centre project undertaken by the East Coast Region Corridor Development Council at a cost of RM248 million.