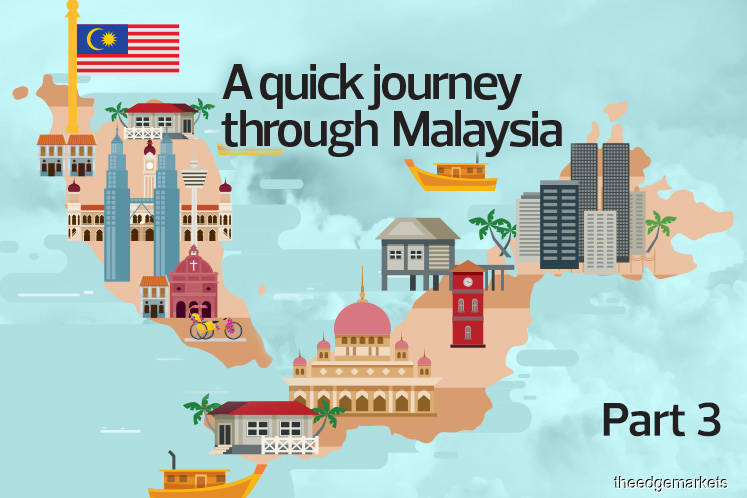 The official portal of the state government notes that Penang was formerly known as Pulau Ka Satu, a name said to be given by a sea rover called Ragam as it was the only large, isolated island he came across on his trading trips between Lingga and Kedah. It retained the name until the coming of the British in 1786. Rehda Penang explains that the name of the state is derived from “pinang”, or betel nut in Malay.

The state is made up of the island and Seberang Perai, a large strip of land on the mainland. The island is connected to the mainland by ferry and two bridges — the 13.5km Penang Bridge and the 24km Sultan Abdul Halim Mu’adzam Shah Bridge.

George Town, the capital and centre of administration, is one of the fastest growing areas in the country. It is a melting pot of various cultures, traditions, religions, customs and language, which are reflected in the daily lives of the different communities. The diversity extends to its cuisine, which has Malay, Chinese, Indian, Eurasian, Siamese and European influences. The city is renowned as a food paradise.

George Town lays claim to the largest collection of pre-war buildings in a Southeast Asia country and is a living historic settlement where mosques, temples, churches and clan houses have survived and provide a window into the past. Its well-preserved cultural and historical heritage was acknowledged by Unesco,which designated it a World Heritage Site on July 7, 2008.

The property market is supported by several planned and ongoing projects such as the expansion of the Penang International Airport (PIA), Gurney Wharf Project and Penang Transport Master Plan. The expansion of the PIA is expected to be carried out in June next year, with construction work on the multi-storey car park beginning last August and expected to be ready by the end of the year.

The Gurney Wharf project will feature a world-class public park on part of the 54ha of reclaimed land on the Gurney foreshore. Perak has been around since prehistoric times, says the official portal of the Perak state government. Kota Tampan in Lenggong is evidence of its existence since the Palaeolithic Age in Tanah Melayu.

Perak became better known following the discovery of tin in Larut by Cik Long Jaafar in 1848 and the state developed rapidly as more mines opened.

According to Rehda Perak, state capital Ipoh was originally a village. It grew quickly in the 1880s as huge deposits of tin were discovered within its vicinity. By 1895, Ipoh was the second largest town in the Federated Malay States — comprising the four protected states of Selangor,

Perak, Negeri Sembilan and Pahang in the Malay peninsula — which were established by the British government in 1895 and which lasted until 1946.

Ipoh fell into decline and neglect from the 1970s due to the depletion of tin deposits in the state and the collapse of tin prices. It gained in popularity again — as a tourist destination — thanks to the state’s efforts to conserve its colonial-era architecture as well as its cuisine and natural attractions such as its limestone hills and caves. Ipoh, which was declared a city in 1988, also managed to maintain its reputation as one of the cleanest cities in Malaysia.

Its Old Town is a testimony to its glory during the colonial and tin-mining days. Many of the buildings and landmarks erected at the time are still standing and remain well preserved. With 70% of Ipoh’s population being of Chinese descent, the rows of old shophouses in Old Town were inspired by the Chinese architecture of the time.

Even though they are not in the best condition, these buildings bear testimony to Ipoh’s heady tin-mining days. The Chinese shophouses in New Town are generally in better shape. This northernmost state of Peninsular Malaysia is also its smallest. The state’s capital, the 2,619.4ha Kangar, shares a border with Padang Besar — the gateway to Thailand — and Alor Setar in Kedah.

Rehda Perlis notes that Kangar was established in 1653 as the administrative centre of the 14th sultan of Kedah, Sultan Muhyiddin Mansur Shah. The state and federal governments recently initiated three projects that have significantly advanced the development of the town. The projects involve the construction of electric train service (ETS) stations in Arau and Padang Besar and Universiti Malaysia Perlis (UniMAP), and the cultivation of Harum Manis mangoes.

The town boasts a roundabout that is called Jubli Emas and bears a sign that says “Welcome to Kangar”. It is located close to various government agencies, Balai Polis Kangar, the Kangar Hospital and the Perlis Youth and Sports Complex.

Originally known as Kolej Universiti Kejuruteraan Utara Malaysia or Northern Malaysia University College of Engineering, UniMAP was approved by the Cabinet on May 2001 and renamed in 2007.

Currently, UniMAP has roughly 13,488 students and a workforce of more than 2,193 academic and non-academic staff members. With most of the students staying in Kangar and the surrounding areas, the university brings in a substantial amount of money with accommodation, food and daily necessities.

An icon of Perlis, Harum Manis is a type of mango that grows only in the state due its soil content and weather condition. Most of the farms are in the Bukit Bintang, Batu Pahat and Chuping areas while Kangar is the centre for the retail and wholesale of the fruit.

Perlis produces almost 750 tonnes of Harum Manis a year. The mango, which can only be harvested between April and June, remains green even when it is ripe and is the most expensive local mango, fetching up to RM40 per kg.

The state’s legislative assembly complex is located at Persiaran Wawasan in a 4-storey building that houses the offices of the state administration, the menteri besar and the state secretary. It is also known as Mini Putrajaya. Putrajaya became the country’s federal and administrative centre — taking over from Kuala Lumpur — in 1999. It was made the third Federal Territory in 2001, after Kuala Lumpur and Labuan.

According to the official portal of Perbadanan Putrajaya — an agency under the Ministry of Federal Territories — the city was named in honour of the country’s first prime minister, Tunku Abdul Rahman Putra Al-Haj, for his contributions to the nation.

It was planned to be an intelligent city with Multimedia Super Corridor status.

As the federal and administrative centre, many federal buildings can be found there, including Perdana Putra, the Palace of Justice and Wisma Putra.

It also has residential developments, shopping malls and a convention centre.

The city is famed for its signature bridges, including Putra Bridge, Seri Wawasan Bridge, Seri Saujana Bridge and Seri Gembilang Bridge, which have become favourite spots for photography enthusiasts.

The Putrajaya Landmark or Mercu Tanda Putrajaya was built to commemorate the groundbreaking ceremony of the city in 1995. Symbolising the beginnings of the city with a time capsule structure, the design is a combination of a high-technology theme and the use of contemporary and traditional motifs. The structure is located at one of its highest points in Putra Perdana Park, from where visitors can enjoy a panoramic view of the city.

Another landmark is the 68m Millennium Monument in Dataran Warisan. Designed as a timeline, with etchings on the transparent panels along the walkway denoting important periods and milestones in the nation’s history, it looks like a hibiscus when viewed from above while the structure itself is shaped like a rocket poised for launch.