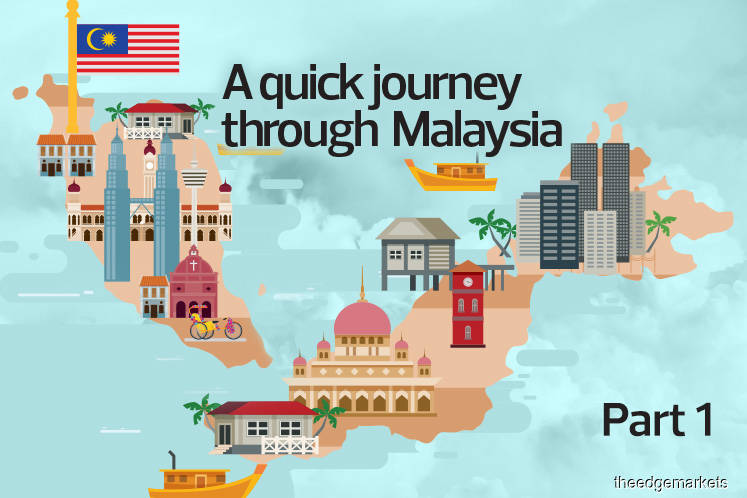 Malaysia celebrated 62 years of independence last month but let us not forget Malaysia Day, which falls on

Sept 16. On this day in 1963, the Federation of Malaya, Sarawak, North Borneo (now Sabah) and Singapore (which left two years later) came together to establish Malaysia.

This country has one of the most unique monarchy systems in the world in which the king is elected on a rotational basis. The nine members of the Conference of Rulers elect the Yang di-Pertuan Agong who will serve for five years. The nine are the hereditary Malay rulers from the states of Johor, Kedah, Kelantan, Pahang, Negeri Sembilan, Perlis, Perak, Selangor and Terengganu.

The membership of the Conference of Rulers includes the four Yang Dipertuas Negeri or governors of Sarawak, Sabah, Melaka and Penang but only the royal rulers are allowed to vote or stand for election as the Yang di-Pertuan Agong. Johor is home to the Southern Economic Growth Corridor. Johor Baru is the state capital.

The official portal for the Coronation of HRH Sultan Ibrahim of Johor notes that the modern Johor Sultanate, under the Temenggong Dynasty, goes back to 1855. Temenggong Daeng Ibrahim established Iskandar Puteri as the administrative centre and built police stations, courthouses and other government departments.

His son, Sultan Abu Bakar, ascended the throne in 1862. He renamed Iskandar Puteri Johor Bahru in 1866 and redesigned the Johor state flag and royal standard in 1871.

Later, he also promulgated the Johor state constitution, making it the first Malay state to have a formal and written set of laws.

According to Rehda Johor, Bangunan Sultan Ibrahim is one of the most majestic buildings in Johor Baru. A combination of Malay and colonial architecture, it was built between 1936 and 1939.

It was the earliest skyscraper and the tallest building in Johor Baru until the 1970s. With a built-up of 60,000 sq ft, Bangunan Sultan Ibrahim was estimated to cost a whopping RM2 million to build at the time.

During World War II when the state came under Japanese rule, the Japanese Army used the building as a fortress. After the Japanese left, the building served as the State Secretariat building, State Assembly Hall and Menteri Besar’s office until 2009.

Istana Besar Johor, or the Grand Palace, is a prominent historical landmark in Johor Baru. Constructed in 1864 overlooking the Straits of Johor, the building’s main architectural feature is its Anglo-Malay architecture, characterised by its Malay-style dome in contrast with its Anglo-influenced blue roof.

It is now used only for investitures, state banquets and royal functions. One of the oldest buildings in the city, it contains valuable artifacts and souvenirs from the glorious past of the Johor Sultanate. According to Rehda Kedah, Alor Setar was founded by the 19th Sultan of Kedah, Sultan Muhammad Jiwa Zainal Adilin II, in December 1735. The name “Alor Setar” is derived from two Malay words: alor (which means a small stream) and setar (the name of a tree).

Pekan Cina, Alor Setar’s earliest town centre, was named as a mark of honour to the first Chinese kapitan of Alor Setar, Lee Yuk Cheng, in recognition of his contributions to society.

Also known by his Malay name of Tok Ekong or Eh-Toh, Lee was appointed the kapitan by the 24th Sultan of Kedah, Sultan Ahmad Tajuddin Mukarram Shah, in 1863. Fluent in both spoken and written Malay and Jawi, Lee was also well-versed in Malay culture and customs.

The uniqueness of Pekan Cina is that it is located next to Pekan Melayu, making the area a symbol of racial harmony.

Pekan Cina is also near two landmarks of the state — Masjid Zahir and Tanjung Chali. The state mosque is one of the oldest in the country, having been built in 1912.

Tanjung Chali, meanwhile, is the point where Sungai Kedah and Sungai Anak Bukit meet. An important port for the Chinese, Malay and Arab traders of the early 18th century, Tanjung Chali is today fast becoming a vibrant tourist hub with many heritage buildings turned into cafés, pubs and restaurants.

Recently, the state government named the areas surrounding Masjid Zahir, including Medan Banda Square, Pekan Cina and Pekan Melayu, as the Alor Setar Heritage Trail with the aim of promoting it as a tourist belt.

Caffè Diem, a coffee place in a prewar shophouse in Pekan Cina, has been named the World Silver Winner in the Heritage Category for 2019 by the Fiabci World Prix d’Excellence Awards. It is the first such award for Alor Setar and Kedah.

The duty-free Langkawi, which comprises 99 islands, is Kedah’s jewel in the crown. Located 30km off the mainland coast of northwestern Malaysia, it is an island of legends and folklore. Kuala Lumpur has many iconic landmarks but what is different today is the growth of urban communal spaces that reflect the lifestyle needs of the present and future generations. Those who live in the city aspire towards higher consumption patterns and a better quality of life.

According to Rehda Wilayah Persekutuan (KL), multicultural experiences — from sightseeing, dining and shopping to entertainment — has driven the city to focus on urban parks and spaces as distinct offerings with signature events. Meanwhile, the city authorities are also rehabilitating green spaces and natural habitats and building eco-adventure clusters and offerings.

One example is Perdana Botanical Garden, formerly known as Perdana Lake Gardens. One of the city’s largest recreational parks covering an area of 92.2ha, it is situated in the Tun Abdul Razak Heritage Park in the heart of Kuala Lumpur. The rebranded park is a peaceful and green respite hidden away from the noise and concrete of the city.

Lush and buzzing with life, the public space is a popular venue for locals and foreigners, young and old.

Its attractions include lush gardens, a lake and a Stonehenge replica. Visitors can have a picnic, jog, skate or take a stroll on the grounds, and special events and performances are held at Laman Perdana.

The park is near other landmarks such as Tugu Negara, National Museum, Kuala Lumpur Bird and Butterfly Park and the Asean Sculpture Garden, where one can view public art installations by artists from Singapore, Malaysia, the Philippines, Thailand, Indonesia and Brunei. Located on the northeastern side of Peninsular Malaysia, Kelantan is an agricultural state with padi fields, rustic fishing villages and casuarina-lined beaches. Due to its relatively isolated location and largely rural lifestyle, Kelantan’s culture differs somewhat from Malay culture in the other parts of the peninsula. The difference is reflected in the cuisine, arts and unique Kelantanese Malay language.

The state’s capital is Kota Baru whose landmarks, Rehda Kelantan says, include Pintu Gerbang Kota Sultan Ismail Petra or Menara Rehal. Many of the state’s monuments and historical buildings, such as Masjid Al-Muhammadi, the War Museum, Istana Jahar and Istana Batu, are also located nearby.

Another of Kota Baru’s landmarks is Pasar Siti Khadijah, which was formerly known as Pasar Besar Buluh Kubu. The market was renamed by the late chief minister Datuk Nik Abdul Aziz Nik Mat as a token of respect to the women traders who dominate the octagon-shaped market.

Masjid Kampung Laut is said to have been built by missionaries who travelled through the Malay archipelago spreading Islam. The foundations of the mosque were laid in the 1730s, making it the oldest in Malaysia and Southeast Asia.

The mosque is named after Kampung Laut, a village on the banks of Kelantan River in Tumpat district, where it was originally located. At the end of the 19th century, the mosque became an important religious centre and was expanded to include additional prayer space and rooms, porches and towers. These add-ons used the unique Tebuk-Pasak technique, where no nails are used in the building of the structures.

The foundations of the mosque became weak as it was built on the banks of the river and was constantly hit by flash floods. After a flood in 1966, which destroyed part of the mosque, the Malaysian Historical Society suggested that it be moved to another location. In 1968, the mosque was resurrected at Universiti Malaya’s Academy of Islamic Studies at Nilam Puri, Kota Baru, where it remains until today.