Cover Story: The Power Of Thrust 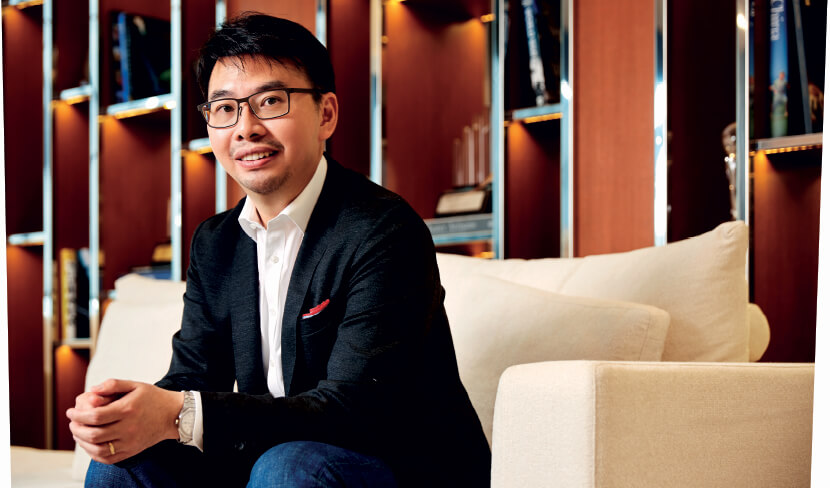 Just 39 years of age, Goh Miah Kiat, CEO of Karex Bhd, the world’s largest manufacturer of condoms, has a great many responsibilities on his shoulders. Diana Khoo speaks to him about his plans for the future and his action-packed month, including the handing over of the EY Entrepreneur Of The Year Malaysia title to his successor on Dec 7 and Karex’s art against AIDS annual charity art auction on Dec 14.

Pandamaran, Port Klang, holds fond memories for me, as it was where my late father used to take me regularly on weekends for long seafood lunches featuring crab cooked in a multitude of ways and the town’s speciality of Teochew-style steamed pomfret with rice noodles and salted vegetables. My visit to the quaint Klang town today, however, featured flavours of a completely different kind.

I am here today to reconnect with Goh Miah Kiat, the endearingly-youthful head of Karex Bhd, whose company name might not be as instantly attention-grabbing as that of its products — condoms, in a multitude of  flavours and varieties. Goh, or “MK” as he is best known, recently made the headlines when newswire AFP reported that Karex was launching a nasi lemak version of the prophylactic. And this was after Karex’s durian-flavoured one (studded too, if you must know) hit the market about a year ago.

“It’s not a marketing gimmick,” says MK in his beautiful office. “And, I can tell you, I found it hilarious to read all the comments when news of it broke. I wanted something that encouraged Malaysians to talk and, of course, to encourage the use of contraceptives. And nothing unites us like food. I also wanted something we all have in common, nothing too scientific. I can talk about graphene (a thermally conducive material that is also incredibly thin and strong, said to be the perfect material for condoms, and permeable only to water) but, I can tell you, it won’t resonate. Innovation is much easier to accept if it’s understood.”

“I’m not a fan of durian but I still developed it,” he adds with a grin. I say that I cannot imagine what a nasi lemak condom might be like, and MK, with characteristic openness and not a trace of shyness, describes, “It smells like nasi lemak, but from a pandan and coconut perspective. I mean, it has got to be fragrant. No one will want it if it smells fishy,” he laughs. “And it’s also studded … to give the sensation of anchovies and kacang (peanuts). In all, it took about a year to develop, from idea to conceptualisation. In the end, it’s still a medical device and the product needs to be tested, to ensure it is stable, with no side effects.”

Young but with lashings of savoir faire, MK — suitably dressed in a smart suit with Audemars Piguet’s Royal Oak on his wrist and Hermès protecting his feet — brings a worldly sophistication to the thoroughly industrial environment. Exceedingly hands-on and driven, a typical day for the young CEO starts at 8.30am and 12-hour days are par for the course. We sit down to drink cups of delicious BB Detox Kusmi tea from Paris. “It’s my favourite,” he says, of the unusual green tea, which has notes of maté, rooibos, guarana and dandelion. His expansive office reminds me more of a suite at a St Regis hotel, coming complete with blue-and-white porcelain bowls overflowing with Phalaenopsis orchids, Khalil Ibrahim artworks on easels, a pony hair table from Marina Home in Dubai and DeLonghi and Nespresso Aerocinno coffee machines. It’s hard to believe we are in the heart of Karex’s kingdom. The only giveaways are clear glass jars on the coffee table containing, not cookies and bonbons, but brightly-coloured circular packets of condoms.

For the full story, pick up a copy of The Edge Malaysia (Dec 4) at your nearest newsstands or visit optionstheedge.com.