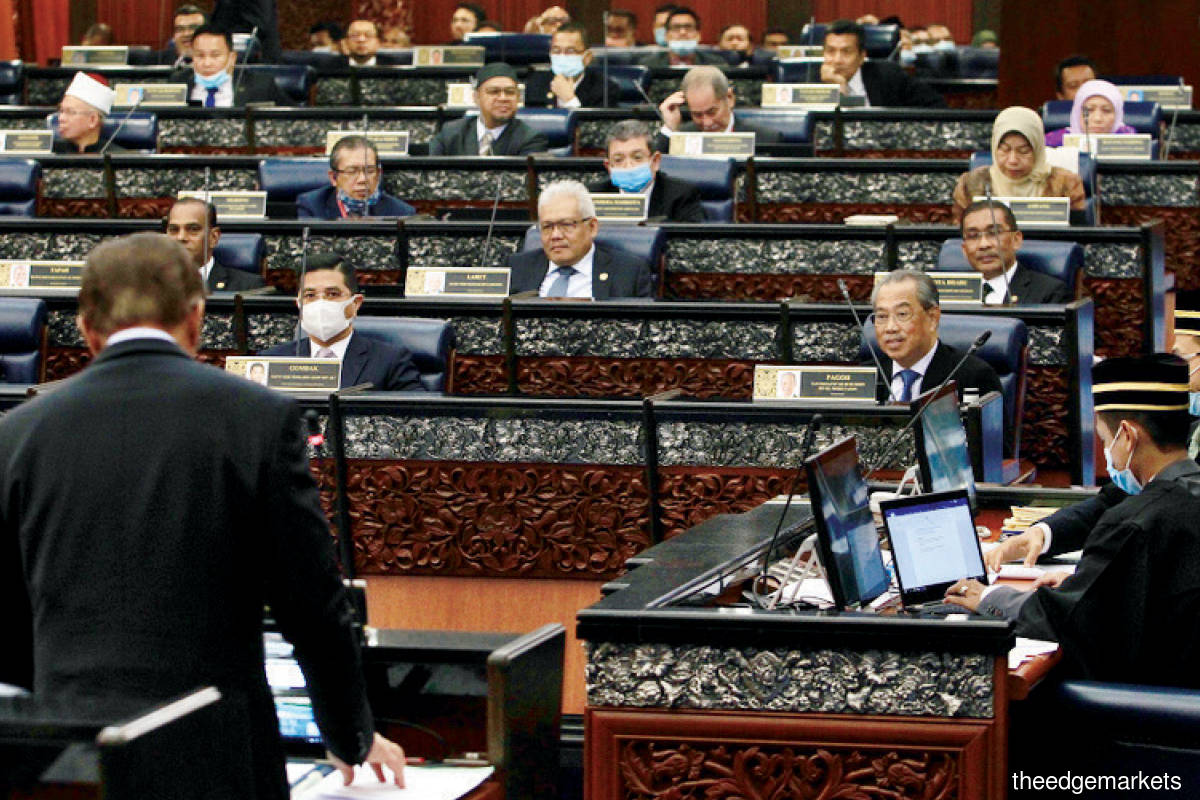 Muhyiddin in the seat of the head of the ruling party in the Dewan Rakyat. His government turned out to be the shortest-lived in Malaysian history amid a fluid political scene that he himself set off when his party broke away from Pakatan Harapan last year. (Photo by Mohd Shahrin Yahya/The Edge)

MALAYSIA can no longer boast of having political stability since the collapse of the Pakatan Harapan (PH) government in February 2020 after only 22 months in power. The ensuing government led by Tan Sri Muhyiddin Yassin’s Perikatan Nasional (PN) was even more short-lived, lasting approximately 17 months until August this year, and setting a record in Malaysian history.

The collapse of the Muhyiddin government can be attributed to its inadequacy in managing the Covid-19 pandemic, which angered the people. This public anger was exploited by his political rivals, from not just the opposition but also within his own government.

It was against this backdrop that his foes — led by former prime minister (PM) Datuk Seri Najib Razak, Umno president Datuk Ahmad Zahid Hamidi and supported by PH leaders such as Datuk Seri Anwar Ibrahim and Lim Guan Eng — manoeuvered to oust him as PM.

A last-ditch memorandum of understanding with PH that would have saved Muhyiddin’s position was quickly rejected by the former even though the offer matched almost everything that PH had been fighting for. PH leaders even dismissed warnings of Umno’s wresting back the PM’s post because they were still smarting from Muhyiddin’s betrayal via the Sheraton Move and thus determined to bring him down at any cost.

Zahid and Najib, on the other hand, were unhappy that Muhyiddin had not “helped” them in their graft court cases despite their support for him.

At any rate, both PH and the anti-Muhyiddin faction of Umno did not get what they wanted — neither Anwar nor Zahid got to be PM. Instead, Umno vice-president Datuk Seri Ismail Sabri Yaakob was the big winner, with the support of Muhyiddin’s Parti Pribumi Bersatu as well as most Umno MPs and Gabungan Parti Sarawak (GPS).

“Poor coordination and communication,” he pinpoints. These led to the people facing much stress from having to comply with a multitude of confusing standard operating procedures, he says. They were doubly frustrated at not being able to see light at the end of the tunnel.

In the initial stage of the pandemic, Malaysians were hopeful about Muhyiddin’s government, Zokhri says. The stimulus packages introduced by the government and a six-month moratorium on most loans gave them some breathing space.

“It shows the government was in active consultation with financial institutions to alleviate the burden of the people,” says Zokhri.

He adds, however, that such assistance could not be sustained, and the country was taking a longer time than warranted to recover from the pandemic.

“Hence, the support decreased, and this had been utilised to the advantage of PN’s opponents,” Zokhri says.

A political analyst has an opposite view, however.

This could be due to the nationwide emergency proclamation announced in January by the Yang di-Pertuan Agong Al-Sultan Abdullah Ri’ayatuddin Al-Mustafa Billah Shah on the advice of Muhyiddin. With the emergency, which lasted until Aug 1, parliament was suspended, thus forestalling any legal challenge to Muhyiddin’s majority support in the Dewan Rakyat.

“Ultimately, however, the responses to the royalty and the desire by Umno to take advantage of Muhyiddin’s vulnerability, the elite politicking, ironically contributed to his downfall in August,” says Welsh in an email response to The Edge.

“Muhyiddin remains popular among the Malay base, but his loss of legitimacy in traditional Malay institutions hurt him and was used by Umno factions to remove him from power,” she adds.

While the Muhyiddin government’s shortcomings in handling the pandemic resulted in its demise, the government itself was wobbly in the first place, as PN alone did not have the numbers to command the confidence of the majority of the Dewan Rakyat.

Muhyiddin’s government was propped up by Najib’s Barisan Nasional (BN), which was not officially part of the PN coalition. Of the initial 112 seats that Muhyiddin secured to be the eighth PM, 42 belonged to BN.

Umno’s official withdrawal of support in July sealed PN’s fate in the federal government. Nevertheless, PN-elected representatives are still in the government under the ninth PM, Ismail Sabri.

Going back to why Muhyiddin’s government collapsed in August, the signs were there all along. As early as January, there had been talk of Umno withdrawing its support for Muhyiddin after several of their lawmakers unilaterally declared that they would do so.

In 2020, veteran lawmaker Tan Sri Tengku Razaleigh Hamzah openly refused to back Muhyiddin as PM, in opposition to the position of his party, Umno, at that time.

Then in January 2021, Machang MP Datuk Seri Ahmad Jazlan Yaakob withdrew his support for the PM. This led to Muhyiddin having only 110 seats out of the 222 in the Dewan Rakyat, one short of a simple majority.

Welsh, however, opines that it was Muhyiddin’s own lack of legitimacy as PM that was the main reason for his government’s collapse.

“He was not an elected PM, and from the Sheraton Move onwards, he was seen as ‘stealing’ the government. This lack of legitimacy among many in the population meant that he faced a deficit in political support,” she says.

Zokhri says the dynamics of Malaysia’s political scene will continue to be unstable until the 15th general election (GE). Adding to the fluidity is the recent High Court ruling ordering the authorities to allow for the registration of the Malaysian United Democratic Alliance (Muda) as a political party.

“Will Muda reinforce PH or will it actually not, by joining forces with Parti Pejuang Tanah Air and Parti Warisan Sabah?” Zokhri asks, referring to yet another new party formed by former two-time PM Tun Dr Mahathir Mohamad and the party led by former Umno Sabah chief Datuk Seri Shafie Apdal, which is aligned with PH only in the state.

What’s for sure is that more political parties will mean smaller majorities for the winning parties in the elections.

“It will divide the votes,” Zokhri says.

This was already apparent in the 2018 GE, he adds, where PH won without a strong majority, with just 113 seats out of 222, including eight seats contributed by Parti Warisan Sabah.

“Due to the weak majority, it was easy for the government to be toppled,” says Zokhri.

Adding to the political fray is Mahathir’s latest party, Pejuang, which he set up after quitting Bersatu, which he had formed upon leaving Umno.

But the political scene was already unstable even before all this, beginning from when Bersatu broke up with PH in February 2020, with Muhyiddin seeking the support of Umno and GPS to make his Sheraton Move and form the new government.

Umno, together with its fellow BN component members — the Malaysian Chinese Association, Malaysian Indian Congress and Parti Bersatu Rakyat Sabah — contributed 42 seats to Muhyiddin’s 112 seats in Dewan Rakyat at that time. Without their support, PN would not have been able to form a government.

However, any coalition, be it BN, PN, PH or GPS, would not be able to form a government currently, as none has a strong majority.

This is why, when Ismail Sabri replaced Muhyiddin at the helm of the government in August, he too needed the support of Muhyiddin’s Bersatu, PAS and GPS, and had to also enter into a memorandum of understanding with PH for its confidence-and-supply votes in order to function as a government.

This was not the norm in Malaysia prior to Bersatu’s split from PH. Up to March 2008, Malaysia was essentially a single-party democracy, with BN as the ruling coalition, led by Umno.

After the historic GE that year, in which the opposition made significant gains, winning five of the 12 contested state seats and denying BN a two-thirds majority for the second time in history, Malaysia turned into a bipartisan democracy with an emerging opposition force through its first formal opposition coalition, Pakatan Rakyat, consisting of Parti Keadilan Rakyat (PKR), the Democratic Action Party (DAP) and PAS.

When PAS severed ties with DAP in 2015, Pakatan Rakyat disbanded, and was replaced with PH, with a splinter from the Islamist party Parti Amanah Negara becoming the third member alongside PKR and DAP.

Then in 2017, Bersatu, then led by Muhyiddin as president and Mahathir as chair, became the fourth member. PH won the 14th GE in May 2018 and took over from BN for the first time to form the federal government, with Mahathir returning as the seventh prime minister.

But this two-coalition system broke down in the aftermath of the Sheraton Move, which led to the collapse of Mahathir’s second government.

Prior to that, Parti Pesaka Bumiputera Bersatu (PBB) led BN Sarawak parties to quit the grand coalition and form its own regional coalition GPS. In Sabah, PN, BN and Parti Bersatu Sabah formed an election coalition known as Gabungan Rakyat Sabah, while Parti Warisan Sabah teamed up with PH.

This means that while PN and BN worked together in Sabah during the state election and formed the state government in 2020, taking over from the Warisan-led government, they do not necessarily have to work together in other states and at the federal level. This was demonstrated in the Melaka state election in November, when BN and PN were contesting against each other head-on in many constituencies, as well as against PH. BN won the state election after securing a landslide mandate of 21 seats out of 28.

Given how political alignments keep changing, loose coalition governments seem to be par for the course in the future. The advantage in this is that everyone can join and leave any coalition, as per the convention in a democracy. The disadvantage is, it will lead to fluidity and a regular change of government.

“This is not good in terms of constructing a national vision and policies. Malaysia cannot move forward if the government keeps changing. It may take another two GEs for stability to return to Malaysian politics,” predicts Zokhri.