Cover Story: With oil above US$100, targeted subsidies for petrol a bigger fiscal boost than GST amid slowdown fears 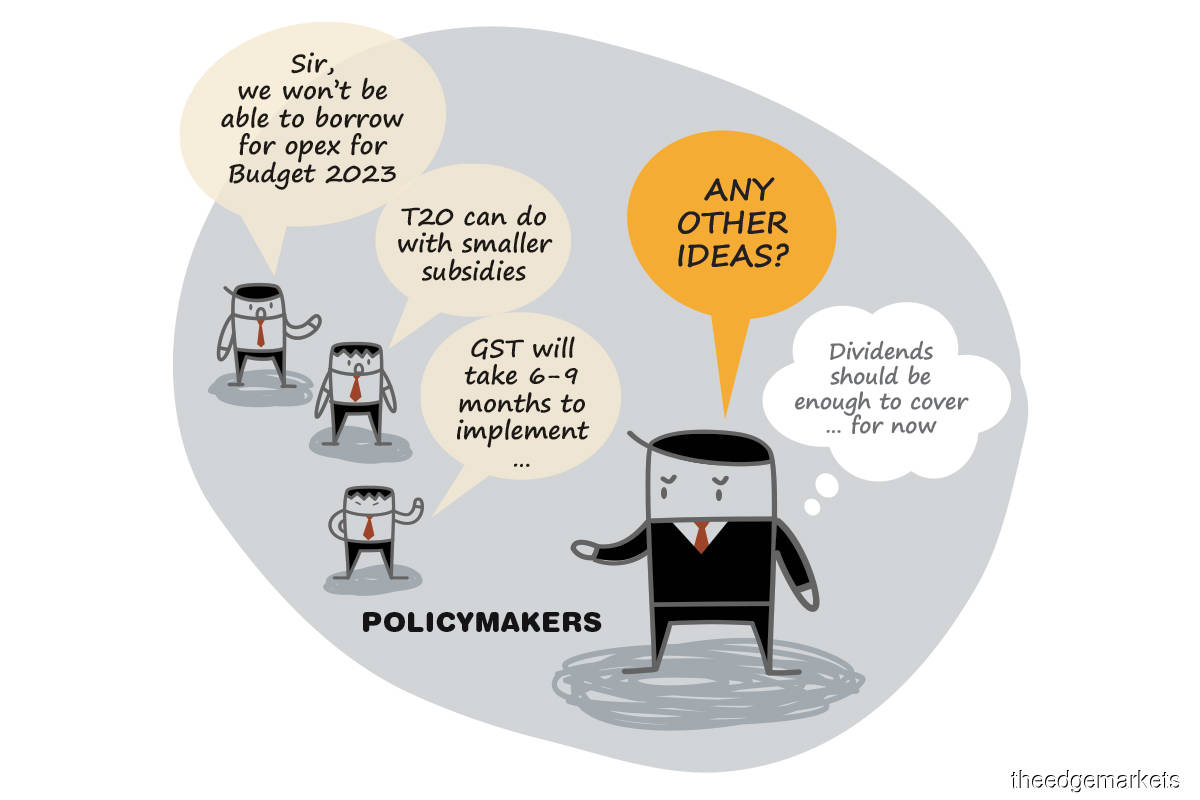 TARGETING subsidies is a “hot potato” politically, but one that can yield a bigger boost for government coffers than the controversial Goods and Services Tax (GST) — especially with oil prices hovering around US$100 a barrel, The Edge’s calculations show.

That could be among the reasons the government took a baby step towards targeted aid last Wednesday, starting with chicken and eggs. Prime Minister Datuk Seri Ismail Sabri Yaakob announced RM630 million in additional cash transfers, which together with the RM1.11 billion under the Phase 2 disbursement of Bantuan Keluarga Malaysia (BKM) totalled RM1.74 billion, to help 8.6 million vulnerable and lower-income recipients cope with the rise in the cost of living from higher food prices. The additional RM50 to RM100 cash aid brings the total disbursement starting June 27 to between RM50 and RM500 for each eligible individual/household recipient.

The announcement came three weeks after Ismail Sabri said Malaysia would no longer subsidise chicken breeders from July 1 but would instead divert cash directly to consumers who needed aid. The news also came a day after the Ministry of Domestic Trade and Consumer Affairs announced the removal of the price ceiling for whole broiler chicken and eggs as well as that of bottled cooking oil from July 1. Only 1kg polypack cooking oil will be subsidised and sold at RM2.50 instead of the current market price of RM9, with the bill to subsidise 60,000 tonnes a month expected to reach RM4 billion for the whole of 2022, from RM2.2 billion in 2021 and RM500 million in 2020.

On June 24, however, Ismail Sabri said the government would introduce a new price ceiling for chicken, a move that is likely to keep Malaysia among the world’s highest consumers of chicken per capita (see Infographic on Page 77).

With the rise in coal prices and imbalance cost pass-through (ICPT) rebate of 2 sen/kWh for domestic users set to expire June 30, electricity tariffs were expected to be up for subsidy targeting in favour of users below 300kWh per month (estimated at 4.3 million or 54% of households that are getting only 22% of some RM715 million in subsidies for the first half of 2022). Some 40% of the electricity subsidy benefits the 1.2 million or 15% of households with electricity usage above 600kWH, according to data from the Ministry of Finance (MoF) that has said the government is reviewing electricity and petrol subsidies in favour of the vulnerable and lower-income group. However, on June 24, the government maintained the 2sen/kWh rebate for all domestic users — attesting to the difficulty in rolling back the various blanket subsidies that many consumers see as more a right than a privilege. It is no secret, though, that targeting petrol subsidies — which forms the bulk of the total subsidies bill currently estimated at RM71 billion this year — will be the most challenging for policymakers, many of whom are politicians who will soon be facing the electorate in the 15th general election (GE15) that has to happen by September 2023. There is already speculation of Budget 2023 being brought forward from Oct 28 in favour of earlier polls.

“The T20 [households] are also voters,” says an observer.

Seasoned economists reckon there is still breathing room for policymakers to “hold out until after GE15” when it comes to petrol because Malaysia, being a net oil and gas exporter and the world’s second largest oil palm exporter, benefits from higher prices — even though MoF has said the increase in revenue (excluding any special dividends) was not enough to cover the jump in this year’s subsidies bill.

If indeed the government’s estimates that 53 sen of every RM1 of subsidies spent on petroleum products goes to the top 20 (T20) of households compared with only 15 sen to the bottom 40% (B40) are right, some RM7.1 billion would have gone to the T20 (RM47 per month per household on average) compared with only RM2 billion to the B40 (RM7 per month per household on average) from January to April this year.

That RM21.4 billion going to the T20 would have been enough to give 8.6 million recipients of BKM cash aid RM2,488 each on average, which is significant given that the highest BKM cash aid payout for 2022 (part of which has been disbursed) is RM2,500 per household, back-of-the-envelope calculations show. The RM7.1 billion that went to the T20 in the first four months alone could have translated into RM825 on average for each of the 8.6 million BKM recipients.

That RM21.4 billion that is likely to be going to the T20 in blanket subsidies this year is about 1.3% of GDP. It is also comparable to the additional revenue a year that Malaysia saw from replacing the previous Sales and Service Tax (SST) with the GST at 6% between April 1, 2015, and June 1, 2018.

It is worth noting, however, that the gap between the revenue from the current expanded SST and normalised GST income is currently closer to RM10 billion a year, our back-of-the-envelope calculations show.

According to official figures, revenue from GST collected during the 38 months of implementation totalled RM132.74 billion, which works out to roughly RM3.5 billion a month and RM41.9 billion a year on average.

Revenue from GST would still be a sizeable RM113.74 billion (RM35.9 billion a year and RM3 billion a month on average) if one were to deduct the RM19 billion in excess GST refunds that were owed to businesses (part of the RM37 billion in owed tax refunds that needed a RM30 billion special dividend from Petroliam Nasional Bhd [Petronas] in 2019, with the remaining RM18 billion being excess income tax), simple calculations show.

That puts the gap between the revenue collected from the axed GST at 6% and the revenue from the expanded SST closer to RM10 billion rather than RM20 billion a year. This is given that official figures show revenue from the expanded SST reaching RM27.7 billion in 2019, was RM26.77 billion in 2020 and is estimated to reach RM27.56 billion this year from RM26.5 billion in 2021. To be sure, the size of collections will grow with the economy as well as better implementation, in absence of a higher tax rate.

Yet, given that the propensity to spend (and do it within the Malaysian economy) is greater among the B40 and M40 compared with the T20 households, it is clear that subsidies can be better targeted in aid of those who need them more.

While fears of a global economic slowdown drove oil prices to their lowest in over a month last week, they continue to hover above US$100 a barrel at the time of writing.

Even if the subsidy bill were closer to RM30 billion (instead of RM71 billion), there is a need to improve the government’s fiscal space, especially after more borrowings had to be made during the pandemic to save lives and livelihoods. Cost of debt is also on the rise, with a hawkish US Federal Reserve determined to bring inflation down by raising interest rates and shrinking its balance sheet.

Going by the current trajectory, Malaysia’s direct federal government debt — which reached RM1.016 trillion at end-April (62% of GDP) is poised to reach RM1.08 trillion by year end (65.8% of GDP) — debt service charges could swell above RM46 billion next year.

This means federal government revenue needs to grow by at least RM20 billion year on year to maintain the ratio of debt service charges-to-revenue at about 18%, failing which debt service charges could rise closer to 20% of revenue, our back-of-the-envelope calculations show.

Already, the debt service charges of RM43.1 billion estimated for 2022 requires RM18.4 out of every RM100 earned by the government to service — and that’s just the interest, not the principal.

The government has committed to bringing down its fiscal deficit from 6% of GDP this year to 3% to 3.5% of GDP by 2024/25, according to its Medium-Term Fiscal Framework (MTFF). Due to the outsized subsidy bill for 2022, expectations are for government-linked corporations (GLCs) like Petronas to pay additional dividends to the government to help keep the fiscal deficit at 6% of GDP. Barring the reintroduction of GST or further expansion of the current SST, targeting subsidies will help bring down operating expenditure and lower the pressure on GLCs, which also need to invest to replenish their ability to support the economy before the next crisis hits. If the barrel is kicked down the road, the chicken will come home to roost.