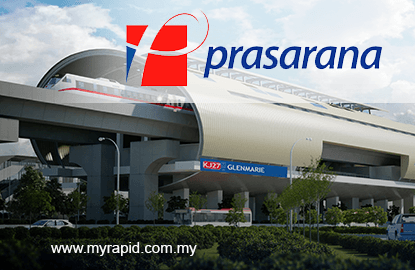 ON Sept 1, 2002, the two light rail transit (LRT) systems — Sistem Transit Aliran Ringan Sdn Bhd (Star), which is now known as the Ampang Line, and the Projek Usahasama Transit Ringan Automatik Sdn Bhd (Putra), which has since been renamed the Kelana Jaya line — were taken over by the government via Syarikat Prasarana Negara Bhd, now known as Prasarana Malaysia Bhd.

The two LRT systems had been weighed down by debt totalling RM5.7 billion (as at November 2001) when the Corporate Debt Restructuring Committee (CDRC) stepped in.

Star LRT cost Prasarana some RM3.3 billion, while the takeover of the Putra LRT system cost about RM4.5 billion. Later, Prasarana forked out about RM124 million to DRB Hicom Bhd for bus service provider Intrakota in 2004. In November 2007, it took over the KL monorail system, and some RM880 million in loans owed to Bank Pembangunan Malaysia Bhd by its operator.

Stripping the bus business, daily ridership numbers in 2014 was at 527,659 for the two LRT lines and monorail, but Prasarana still bled losses. The company suffered after-tax losses of RM619.3 million on the back of RM484.5 million in revenue for its financial year ended 2013, and is unlikely to have turned the corner in 2014.

Similarly, KTM Bhd, which is wholly owned by the government, suffered an after-tax loss of RM103.4 million on revenue of RM441 million in its financial year ended December 2011. Since then, no financials have been available at the Companies Commission of Malaysia.

Back in 1997, the government attempted to privatise KTM’s management and awarded the contract to a consortium led by Marak Unggul Sdn Bhd, a company controlled by Renong Bhd. But Renong crumbled as a result of the Asian financial crisis of 1997, which resulted in the government taking KTM back in 2002.

In a nutshell, rail transport does not rake in profits and is viewed as a service rather than a revenue generator. And when there are opaque dealings, things can get worse.

The National Audit Report in 2008 zeroed in on Prasarana’s acquisition of KL Infrastructure Group (KLIG), the concessionaire and operator of the monorail business.

“Based on the directors’ resolution dated Feb 21, 2002, Prasarana bought 52 million shares valued at RM26.52 million. This was equivalent to 10% equity in KLIG. Auditors could not find the justification for this purchase as KLIG was a company in financial trouble and had failed to complete the monorail project,” the Auditor-General’s report read.

By 2007, the KLIG shares acquired for RM26.52 million was worth only RM6.76 million. “It is the view of this audit that the share acquisition was a loss-making investment for the government.”

The report also showed that Prasarana had forked out 10% to 50% more for three parcels of land slated to be used as bus depots.

In July 2008, Prasarana’s board of directors approved an RM33.25 million budget for a 6.86ha parcel , or RM45 psf, in Balakong, Cheras, to build a bus depot. “The auditors could not determine the justification for the budget, which was 10.8% to 50% higher than the Land Office and Valuation Department’s estimates and two private valuation companies in February 2008,” the report said. The land, said the report, was acquired from the owner of the office building Prasarana was renting.

Then, in October 2009, the National Audit Report warned that Prasarana might not be able to repay debts papers of RM7.1 billion, which required staggered payments from 2011 to 2023.

While Prasarana has been grappling with losses, other rail projects have also been less than trouble-free.

For instance, the last leg of the double-tracking project linking Gemas in Negeri Sembilan to Johor Baru, which costs RM8 billion, has yet to be awarded. It was supposed to have been completed in 2008.

In 2011, the then Transport Minister Datuk Seri Kong Cho Ha had appointed two consultants for the 197km line and commenced negotiations with Chinese firms to undertake the job. “We hope the contractor can be appointed before the end of this year,” Kong had said.

Then again, the double-tracking project has a colourful past. When the project was initially conceptualised in the late 1990s, China and India were actually ready to build the entire stretch from Padang Besar in Perlis to Johor Baru for an estimated RM44 billion, payable in crude palm oil.

At the eleventh hour — in 2003 — MMC Corp Bhd and Gamuda Bhd scuttled the Chinese and Indian plans with a RM14.5 billion offer, but the project was deferred by the newly appointed premier Tun Abdullah Ahmad Badawi.

The former prime minister is known to be close to Tan Sri Syed Mokhtar Albukhary, who controls 51.8% of MMC.

When Badawi decided to revive the project in late 2007, MMC-Gamuda’s award for the northern portion, a 329km track connecting Ipoh to Padang Besar, was worth RM12.5 billion.

Indian Railway Construction (Ircon), which was supposed to partner China Railway Corp for the RM44 billion contract, was awarded the Seremban-Gemas construction portion, which was valued at RM3.5 billion.

Considering that the Gemas-Johor Baru portion is valued at RM8 billion, the cost of the entire project had shot up to RM24 billion or more than 65% from the initial RM14.5 billion a few years before.

There is also said to have been interference from political bigwigs in the award of rail jobs. In more recent times, the system works and train-borne equipment contracts valued at more than RM1 billion for the extension of the Ampang LRT line was awarded to George Kent (M) Bhd and Lion Pacific Sdn Bhd in July 2012.

Many industry sources say the work has been delayed because the job had been given to George Kent, which is a water infrastructure expert. Tan Sri Tan Kay Hock, a close associate of premier Datuk Seri Najib Tun Razak, is the controlling shareholder of George Kent. He has a 42.2% interest.

With Malaysia’s rail projects fraught with so many issues in the past, will the high-speed rail project be any different?