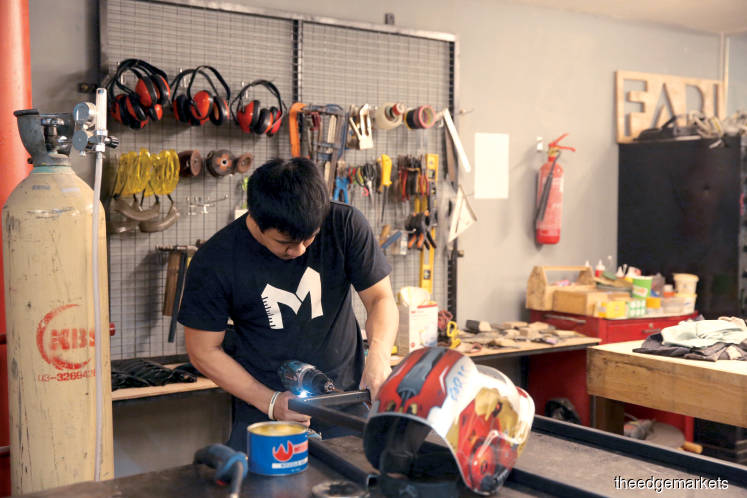 This lack of engagement and hands-on learning has triggered concerns about the effectiveness of education. If the country is to make headway in Industry 4.0 and become a developed nation, students will have to be equipped for the jobs of the future. This means being well-versed in science, technology, engineering and mathematics (STEM) as well as being entrepreneurial enough to build products using cutting-edge technologies.

This is where the maker movement comes in. Loosely defined, it is a movement that encourages people to create things by using the tools available in makerspaces. The space is oftentimes equipped with high-tech equipment, such as 3D printers and laser cutters, as well as electronic, woodworking and metalworking tools.

In the past few years, makerspaces have been sprouting up across Malaysia in universities, schools and shopping malls. Many workshops and maker fests, where participants learn new skills and are challenged to build products to solve problems, have been organised.

For the many leaders of the movement in Malaysia, their purpose is to reform education. “Schools today are primarily teaching systems, not learning systems. The teacher stands up and delivers whatever he has to say,” says Rajesh Nair, professor of practice and director of the Innovation and Entrepreneurship Centre at the Asia School of Business (in collaboration with MIT Sloan Management). The university, housed in Sasana Kijang in Kuala Lumpur, has a makerspace called the FabLabKL.

The whole process of enabling students to create and learn for themselves does wonders for their confidence. It is something Nair noticed when he held almost 60 maker workshops in India before joining ASB.

“If you ask them whether they could make something, they immediately say no, that it takes too much time and that they are not engineers. But by the end of the two days, they have created things that work. That really changes their perspective and raises the question of what else they could do in life,” he says.

There is an urgency to reform education because students may have to create their own jobs in the future, says Nair. “Almost 60% of the current jobs will not be around in the next 20 years. Artificial intelligence and robots are going to change how work is done, from surgery to law. What jobs are going to be hard to replace? The creative ones. The repetitive and knowledge-based ones will be easier.”

So, the two qualities that cannot be replaced are creativity and problem-solving. “There are always going to be problems. If you can solve them, somebody will be willing to pay for the solutions. If you can understand the problems and create solutions, you have the ability to create jobs,” says Nair.

Chong Zhi Xiong, chief learning officer at social enterprise Chumbaka, observed the same disengagement in classrooms when he served with Teach for Malaysia for two years. By experimenting with coding, programming and electronics classes, he realised that the students were excited when they actually got to touch things in class.

“The way I look at it is that the maker movement serves a lot of functions on the education scene. When students build projects, they build different skills along the way — not just technical skills but also soft skills such as language and literacy,” says Chong.

Chumbaka organises workshops in schools and uses open-source technologies as its platform. It also has a makerspace in Cyberjaya, where it runs programmes for children.

One of the projects the children are working on is a machine that encourages students to return their plates after they have finished eating in the canteen. The students, who pay an additional 50 sen for their meals, will have the sum refunded when they return their plates to a machine. Another project involves a machine that squirts water at stray cats or dogs that wander into the school compound.

“To build these machines, you have to think about the sensors to put in. Vending machines are not that easy to make. How do you recognise a 50-sen coin and differentiate it from a 20-sen coin, especially now that the 50-sen coins are smaller?” says Chong.

“So, the students identify a problem, figure out how to solve it and then start thinking about what kind of skills they would need to pick up along the way to build the machine or complete the project.”

In the current school system, students merely absorb what the teacher says and regurgitate it during examinations, he points out. “With the makerspace, the students are taking charge and identifying the problems. They find a solution, bounce the idea off us and see whether it can really work. Only then, do they start working on a solution, step by step.

“There is an element of programme management — ‘Oh, I need to follow a timeline’ — and critical thinking that go into it. That, too, at the age of 10 or 11.”

Once students adopt an entrepreneurial mindset and equip themselves with skills, they are primed to be innovators and entrepreneurs. Even if they don’t become one, the students will increase their chances of being employed. This may address the problem of talent mismatch and graduate unemployment.

“When a company takes in a fresh graduate, it invests almost a year of training for them to be employable. If a student comes in as a blank slate with some theoretical knowledge but no practical experience, it takes about 1½ years for them to be productive,” says Nair.

“But imagine someone who can come in and hit the ground running, who can jump in and create solutions when given a problem. His employability would be much higher.”

Smoothing the road to entrepreneurship

Makerspaces also cater for start-ups and people who have ideas but need just the right tools to make their prototypes. Many start-ups rent the equipment in these spaces to refine their products, instead of purchasing the equipment themselves or outsourcing the project, to reduce their costs. This access to such tools enables their ideas to come alive.

The makerspace communities can serve as a good support system for start-ups, says Johnson Lam, founder of the KakiDIY movement. He has makerspaces in Cyberjaya and The School at Jaya One.

Two start-ups have come out of the space he used to run at the Cyberjaya MaGIC (Malaysian Global Innovation & Creativity Centre) building. One is Poladrone, which builds applications for drone use in the agriculture sector, and the other is MyCRO, which builds 3D printers, among others.

Lam met the Poladrone founder at a Start-up Weekend event. “Originally, the founder wanted to use drones for home security and wanted to build his own drone. That was when the experience of the community came in. We said, instead of building his own drones, he could use other people’s technology and add his stuff. Once the start-up came up with the idea of using drones for agriculture, we provided our makerspace in Cyberjaya, where they started work and prototyping,” he says.

The MyCRO founders realised the importance of building a community for their 3D printing business to prosper. “Originally, they just wanted to build 3D printers and sell them. But because of the experience and maybe the community at the maker lab, they realised that doing just that would not work. They needed to touch on community, which meant making sure people know what it is for and how to use it, as well as to inspire people to build stuff,” says Lam.

The founders got involved in the programmes he was running at the space and they got feedback from the community. The 3D printers at the KakiDIY space are now supplied by the company.

“We are partners with Mukk, which does a lot of handcrafted wood products. They do laser cutting here and usually prototype their ideas here as well. They have access to all the wood-cutting machines here, but not the laser cutter,” says Gwyneth Jong, co-founder of Fabspace.

She adds that many design students come to the space to build their projects since universities often do not have sufficient facilities.

“There is also a hobbyist maker who comes here. He is very professional. He built his own electrostatic headphone from scratch here. He came every week to do something until it became a proper working headphone. He left it here for our customers to try out. He was just here yesterday making a keyboard,” says Jong.

The maker movement has been embraced by the Malaysia Digital Economy Corporation (MDEC). It is working on the policy front with the Ministry of Education to design a curriculum that incorporates the maker element. For instance, the subject that used to be known as Kemahiran Hidup (life skills) is now known as Reka Bentuk dan Teknologi (design and technology).

“In Kemahiran Hidup, woodworking is woodworking, electronics is electronics and farming is farming. Nothing is combined. So, that is what Reka Bentuk dan Teknologi is trying to do,” says Chong.

“Now, we are introducing open-source hardware to all these students. But how do you turn it into project-based learning? That is the direction they are going in.”

Meanwhile, the subject known as ICT (information and communications technology) has been changed to ASK (Asas Sains Komputer). “ICT is about the components inside the central processing unit — the hard drive, RAM, USB ports and so on. Now, they are going in the direction of computer science,” says Chong.

“If you want to build a game or do animation, how do you do that? You learn Python programming. A lot of the time, they ask you to build a simple calculator or a tic-tac-toe game which you can play on the computer.”

MDEC launched the #mydigitalmaker movement in 2016. The initiative includes the plan to incorporate computational skills into the curriculum and establish digital maker hubs around the country.