Cover Story: Making an impact on the world’s most liveable city

An artist’s impression of a penthouse. pictures by Beulah International

Paragon’s apartments are designed to be light-filled

THE autumn air is crisp and clear as we stroll along the tree-lined Queen Street in Melbourne’s central business district towards the corner of Queen Street and La Trobe Street, where the iconic 140-year-old Celtic Club building is located. The club was established in 1887 for the Australian Irish community in Melbourne.

The first building on the site was the Royal Oak Hotel that was built in 1848. This was replaced by the West Bourke Club Hotel built by Port Phillip pioneer George Evans in 1876. This building was then taken over by the Celtic Club in 1959.

Last September, Melbourne-based Malaysian developer Beulah International bought the 676 sq m heritage building, together with the development permit for a 48-storey building, for A$25.6 million after more than the required 75% of the club’s voting members agreed to the sale.

Beulah co-founder and executive director Adelene Teh says the much sought-after Celtic Club site had been on the market for 10 years but not all the club members were ready to part with it. “When we were shown the site by CBRE (Australia), we immediately fell in love with it,” she tells City & Country.

“We have lived in the Melbourne CBD for over 10 years now and we know this is the best corner for residential living in the city. Also, the cultural and historical significance of the building means a lot to us as we are aware that many people have emotional and sentimental ties to it.”

Beulah had bid for the site before but did not obtain the 75% votes required. “We only received 72% but we didn’t give up because we love the site. So we tried again,” says Teh.

Beulah general sales manager Jamie Baldwin says it took close to six hours of negotiations with the Celtic Club members to seal the deal. “We know many have got their heart and soul in the building, so we sat there, hearing them out and answering every question and concern of over 100 people. We explained that we were going to preserve what has always been there and make it better. In the end, we got more than what we needed to acquire the site and we’re really happy to inherit this prestigious site.”

Co-founder and managing director Jiaheng Chan says the company’s commitment is to add character and depth to the surrounding area. “We aim to keep the existing façade of the building to ensure its history is retained and respected in the development of the site in collaboration with world-class architecture company Fender Katsalidis.”

Beulah is undertaking the project in a joint venture with property and construction company Fajarbaru Builder Group Bhd and a private investor. It will have a 42.78% stake in the JV while Fajarbaru will hold 22.22% and the private investor, 35%.

Named Paragon, the development will feature a 48-storey residential tower with retail and food and beverage outlets on Levels 1 to 4 and will be launched on April 22 in Kuala Lumpur. The two-day event will be held at The St. Regis Kuala Lumpur. The project will also be unveiled in Australia, China, Hong Kong, Taiwan and Singapore, among others.

“Paragon means a perfect 100-carat diamond, which represents exemplary perfection. With Melbourne being an exemplary city to the world, we want to create something that will set an example to other projects in the city,” explains Teh.

Melbourne, which the locals often fondly say has four seasons in a day, has been ranked the world’s most liveable city for the sixth consecutive year by the Economist Intelligence Unit.

Teh describes the upcoming structure as an elegant, shimmering, champagne gold tower that will go well with the cream stone finish of the Victorianesque façade of the existing building, which will be retained in the new development. “The result will be a statement of boutique sky-rise living. It will be all glass and entwined by beautiful, refined anodised metal in the form of facets like a diamond, reflecting the city views around it,” she says.

The freehold tower with a gross development value of A$190 million will feature 227 apartments on Levels 8 to 48. The internal built-ups (not including the balcony) of the 1 to 3-bedroom units will range from 50 to 140 sq m while that of the penthouses will be from 193 to 198 sq m. Their selling prices are from A$505,800 to A$3.1 million while the indicative monthly maintenance fee is A$500. The project is set to be completed in 2020.

Paragon’s apartments are square-shaped and designed to be light-filled, thanks to the full glass windows. The units come with kitchen and bathroom fittings and are outfitted with Bosch and Gaggenau appliances. With six apartments per floor, the tower will be served by three lifts and will offer 30 basement parking bays and automated parking technology.

Levels 5 to 7, where the facilities are also located, will boast a triple-volume indoor forest, probably Melbourne’s first, says Chan. “We want to create a sanctuary within the city as Australians love nature and backyards. We didn’t want to compromise on that lifestyle when they move to the city.”

‘Exclusive corner, yet near all the action’

As Melbourne’s grid spans a gently sloping valley from Flinders Street to Queen Victoria Market, and from Spencer Street to Spring Street, Paragon, with its location at the corner of Queen Street and La Trobe Street, is at the peak of the valley’s elevation. This puts it in a quiet corner at the edge of the grid yet within walking distance of the hustle and bustle of the city.

It takes about five minutes to walk from Paragon to Flagstaff Gardens, Queen Victoria Market, Melbourne Central and the shopping and dining streets in the CBD. There is also a tram stop, a train station and a bus stop in the vicinity.

Melbourne has changed from a quiet place about two decades ago, when most shops closed at night, to a lively and vibrant city. Today, it is home to thousands of cafés and modern dining establishments, some of the world’s tallest skyscrapers, such as Eureka Tower, and leading educational institutions, including The University of Melbourne and RMIT University.

According to CBRE Australia national director Mark Wizel, people who come to Victoria are choosing to live in the Melbourne CBD. “It has got people coming from overseas but the largest migration is interstate.”

For example, he says, a lot of people are migrating from Sydney because its house prices are unaffordable. However, he adds, Melbourne’s houses are not cheap; they are the sixth most expensive in the world. “And because many cannot afford houses, they are downsizing and moving to apartments, which is why we’ve seen a huge increase in demand for apartments in Melbourne.”

Wizel also notes that foreign investment in Australian property is concentrated in the office and residential markets and centred in core markets such as Melbourne and Sydney. “The Melbourne apartment market also draws investors due to its relatively cheaper prices compared with other major cities such as Shanghai and Beijing.”

“The Melbourne CBD is doing well from a lifestyle, amenity and job perspective. If we look at the commercial market, we can see a growing number of tech companies taking up office space,” he says, adding that the majority of the employees of these tech companies prefer to live near the conveniences that the city offers, thus driving demand for its apartments.

“In the last 10 to 15 years, when the economy moved from manufacturing to services, there has been a strong concentration of jobs in the CBD and people want to live near where they work,” he says.

“Melbourne’s house prices have risen 89% since 2009 due to the increase in its population. Having said that, housing demand is outstripping supply.”

In terms of rent yield, Wizel says it is high in the apartment market. “If you buy something in Beijing for

A$1 million, the yield is around A$300,000 or 1.5%. But if you buy a property in Melbourne for A$500,000, the yield is 4.5%. That’s another reason why people are investing in Melbourne apartments as rental returns are quite high with low residential vacancy rates of 1.7% in the CBD.”

He adds that CBRE Australia has sold A$7 billion worth of development sites in the Melbourne CBD since 2009. “And if we had 10 sites tomorrow, we would be able to sell all 10 to both Asian and local developers.” This, he notes, is a good sign of confidence in the Melbourne CBD market.

Early this year, Beulah completed its first development, Gardenhill, in Doncaster. The project, also done in a joint venture with Fajarbaru, is fully sold. It launched its second project, Hallmark, in Ivanhoe in January. This is 90% sold. In the pipeline are a A$37.8 million luxury townhouse development in South Melbourne and a A$56.8 million ultra-luxurious apartment project in South Yarra.

Says Teh, “We are a dedicated and hard-working team. We love property, architecture and design, and are committed to designing high-end residences with excellence in quality and a focus on innovation while creating value for the owners. We put a lot of effort into every detail of the product and design, and try to push back the boundaries. That’s our vision.” 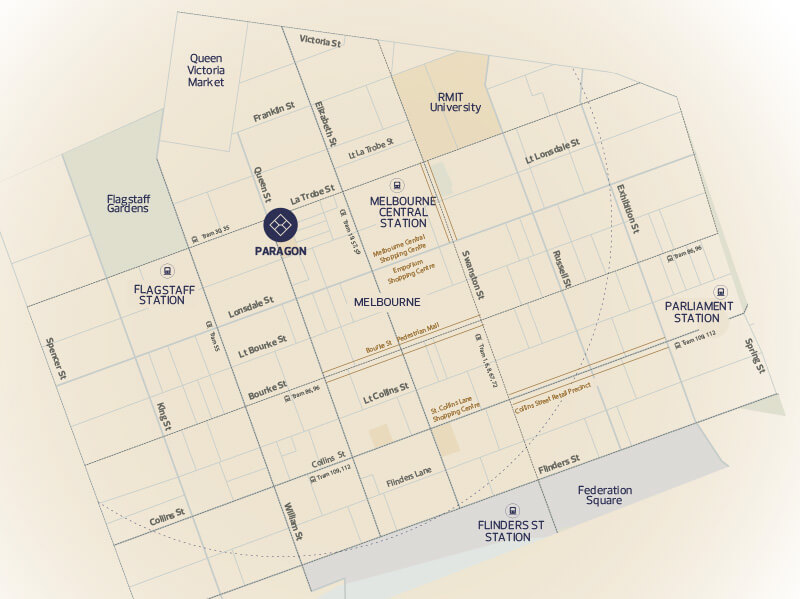 Layout and built-ups: One to three bedrooms including penthouses, ranging from 50 sq m to 198 sq m