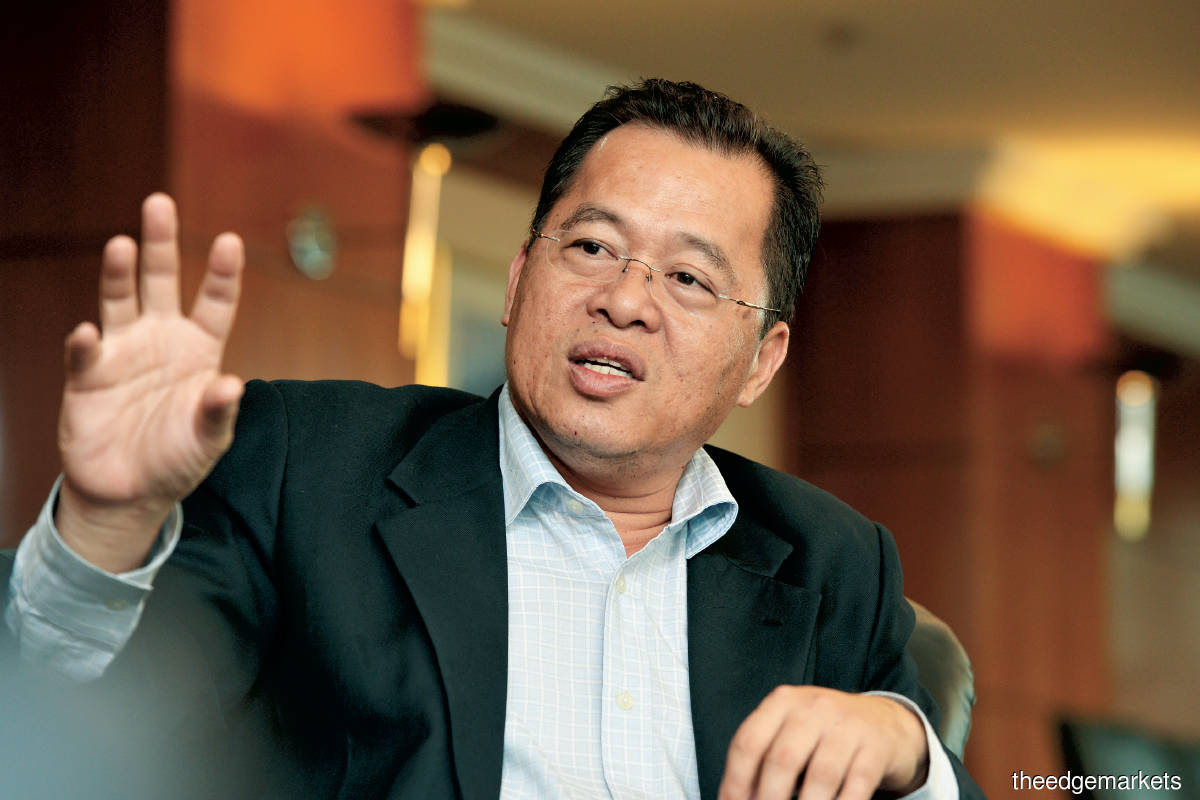 A big cloud of uncertainty seems to be hanging over Tenaga Nasional Bhd. This ranges from the future returns of its capital expenditure (capex) to the changing political scene and global warming, not to mention the evolving industry landscape that has resulted in the utility giant losing its dominant position. The situation has sparked concerns about its prospects.

Despite “buy” calls on the stock by analysts and its generous dividends, Tenaga’s share price has drifted down to multi-year lows, as less optimistic investors stay on the sidelines.

Tenaga’s newly appointed president and CEO Datuk Baharin Din was fully cognisant of these issues when he took over in March after his predecessor Datuk Seri Amir Hamzah Azizan left to helm the Employees Provident Fund.

Before addressing questions on the latest update of the Regulatory Period 3 (RP3), a mechanism that decides the rate of return of Tenaga’s capex, Baharin stresses that he is positive about the utility giant’s prospects and sees promising earnings growth ahead. He also highlights its ambitious renewable energy (RE) targets.

Baharin says the group’s capex budget is RM7 billion to RM10 billion a year. The bulk of it is for modernising the country’s power grid to facilitate energy transition in order to meet the government’s target of having RE account for a 31% share of generation capacity by 2025 and 40% by 2035. Coal is currently the main fuel used in Tenaga’s power generation, accounting for more than 40% of the fuel mix. However, the utility giant does not want to be left behind in energy transition; neither can it afford to do so. The group’s target is to more than double its RE capacity to 8,300mw by 2025 from 3,400mw now.

“In our RP3 submission, we are looking at increasing our capex to modernise our grid [to facilitate energy transition]. We believe the ST [Energy Commission] is very much in line with us, wanting to see a resilient, robust network that facilitates the modernisation of the industry,” he tells The Edge in a virtual interview.

RP3 is a crucial element in Tenaga’s earnings, setting the rate of return of its regulated asset base (RAB). In addition, a review of electricity tariffs will determine the utility group’s capex. RP2 has been extended until year end as the government has yet to conclude RP3 owing to the pandemic.

Baharin, an electrical engineer by training, had been in talks with the relevant authorities on RP3 and the Malaysia Electricity Supply Industry 2.0 (MESI 2.0) initiative during his first 100 days on the job. He is optimistic that the details of RP3 will be firmed up by October, barring any unforeseen circumstances.

“If you get the RP3 going, it is good for the country and the investment climate. You bring certainty. IBR (incentive-based regulation) has been proved in RP1 and RP2 that it brings certainty,” he states.

“In fact, we rode through the pandemic quite well compared with other industries, mainly because of IBR. You have a motivation element, penalty element, incentive element [in it]. “Even other industries are using the IBR framework as a benchmark. It is a good framework, tested and proven in the last seven years and I believe there is no reason for the government or the industry to not want this to continue.”

When asked if he was confident that RP3 would be concluded soon, he says, “The country needs certainty, the industry wants certainty and investors, in fact, demand certainty. I think all parties, including the government, are fully aware of this.”

The finalisation of RP3 should bode well for Tenaga as it will remove one variable from the horizon and improve its earnings visibility. Nonetheless, some say the devil could be in the details, namely the weighted average cost of capital (WACC).

“While the RAB is likely to increase under RP3 [estimated at RM62.4 billion by end-2021], we do not discount the possibility of WACC being further lowered from 7.3% under RP2,” says RHB Research in a July 6 note. Tenaga requested for a RM25.1 billion capex allowance in RP2, but was allowed RM18.8 billion. This time, it is proposing a capex allocation of RM24 billion for its regulated assets for the three-year period.

“The government is fully aware that Tenaga can play a role in supporting the economic recovery. I believe this will very much be taken into account when they make a decision on the rate of return of RP3,” says Baharin, stressing that the group’s multibillion-ringgit capex budget will trigger multiplier effects that will power the domestic economic recovery.

Nonetheless, as the deadline looms for key policy decisions, including the RP3 and MESI 2.0, Malaysia’s fluid political landscape raises doubts over them. MESI 2.0 is a master plan that will set out a more liberalised landscape in the domestic power industry as new players enter the scene.

From Tenaga’s perspective, it is losing its dominant position in transmitting and distributing power from power producers to end-users.

Third-party access to Tenaga’s transmission and distribution assets will eventually happen should the master plan take off. That will also allow carbon-conscious clients to buy green energy from specific producers.

MESI 2.0 was launched in 2019 by former energy, science, technology, environment and climate change minister Yeo Bee Yin, but it underwent a review last year, soon after the change in the federal government. On top of that, the Low Carbon Mobility Blueprint 2021-2023 drafted by the Ministry of Environment and Water is pending cabinet approval.

Baharin expects policymakers to finalise MESI 2.0 within the next six months. According to him, national development will be introduced as the fourth pillar in the MESI 2.0 review, on top of the energy trilemma issue of sustainability, reliability and affordability. “This is especially when you look at energy transition as another driver of economic growth, in particular the new energy levers,” says Baharin.

In pushing for a low-carbon future, he says the initial MESI 2.0 focused on the supply side — such as third-party fuel sourcing — and did not address in detail the demand side, for instance, the adoption of electric vehicles (EVs). This will mean the building of new infrastructure like charging ports.

“Tenaga is ever willing to provide the necessary EV infrastructure across the nation. We are very serious on the EV front, and we are quite prepared for this,” he adds.

Towards this end, Tenaga has signed a memorandum of understanding with DHL Express Malaysia, which entails the utility installing EV charging stations along DHL’s key service routes. The latter is expected to roll out its first EV fleet in the country by early next year.

Tenaga is also partnering with the Malaysian Green Technology and Climate Change Centre to install more EV charging stations nationwide. It installed 73 ChargEV stations in 2020 alone, according to its annual report.

Being a government-linked company (GLC), Tenaga cannot escape its social responsibility and the ripple effect of changes in the political landscape.

The GLC, in which Khazanah Nasional Bhd holds a 25.69% stake, supports the nation’s recovery efforts, with discounts on electricity bills being a regular fixture in Putrajaya’s economic stimulus packages. Apart from discounts, it also offers deferred payments, as well as subsidies, to eligible households and business sectors.

Tenaga contributed RM250 million in discounts last year, its annual report shows, with the rest shared with the Electricity Industry Fund as well as the government. Baharin sees the discounts as a way of nursing those affected by the pandemic, with Tenaga eventually benefiting when these end-users recover.

“Whoever the government is, we have proved that we are a trustworthy professional entity, an organisation that the government believes will be the entity that delivers the aspiration of the rakyat.”

Asked about the impact of political uncertainty on the company, Baharin replies, “The risk is there, but is mitigated and minimum because the party executing is Tenaga. Tenaga is basically serving the rakyat. Whatever we make goes back to the rakyat through investment funds such as Kumpulan Wang Persaraan (Diperbadankan) and the Employees Provident Fund. I think that goes well for any government governing the country.”

Under its Reimagining Tenaga programme, the group is striving to grow its pre-tax profit by an average of 9.9% annually over the next five years, from about RM7.3 billion in 2020.

In the immediate term, it will emphasise improving the performance and cost management of its generation assets; completing its smart meter installation target of 1.5 million by year end, from just under 900,000 currently; further automating its distribution network; and expanding its rooftop solar portfolio under subsidiary GSPARX from 81mw currently.

Will investors listen to the bullish analysts soon? The cloud of uncertainty has to disperse before that happens.