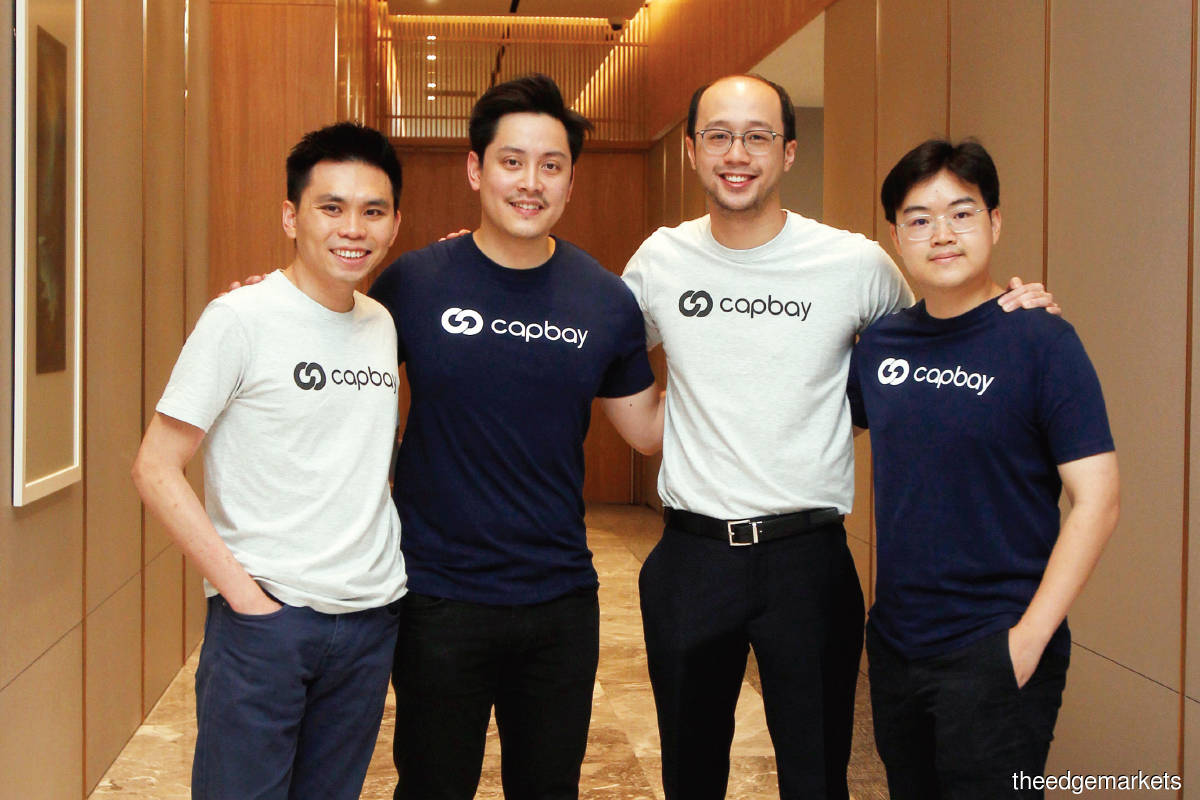 Ang’s knowledge of invoice financing was the result of the research he did for his father, who was a fisherman in Pontian, Johor, and was considering selling his catch to supermarkets. These supermarkets tended to take six months to make payments, often resulting in a cash flow problem for the family business.

While his father was reluctant to take on this new challenge, Ang was determined to find a solution. “If we could solve this cash flow problem, we could become wealthier. That was when I started my research and found out about invoice financing. Banks did not want to lend [to micro-entrepreneurs like my dad] so these invoice financing solutions were helpful,” he says.

In general, these solutions provide cash in advance to small businesses, which return the borrowed amount with interest after receiving payment from their customer or invoice debtor at a later time.

This experience fuelled Ang’s interest in finance, leading him to pursue undergraduate and postgraduate degrees in mathematics-related fields in the UK. He also harboured dreams of starting a company that could function like a bank, he adds.

“That was when I came across the UK-based P2P financing platform MarketInvoice, which provides invoice financing for companies by using investors’ funds. I worked with them briefly and thought that the same thing could be done in Malaysia to help small businesses,” says Ang.

He began researching the potential of starting an invoice financing platform in Malaysia and shared his findings with friends Edwin Tan, Dion Tan and Darrel Ang, whom he met while studying in the UK. They have backgrounds ranging from corporate finance to consulting.

In 2016, the four of them decided to take the leap and start Bay Supply Chain Technology Sdn Bhd. They began by helping to improve banks’ invoice financing processes so they could serve more small and medium enterprises (SMEs).

“We started as a platform provider to banks that wanted to do supply chain financing (a general term for invoice financing). It is difficult for banks to do this because it involves a lot of operational work, documentation and communication between three parties. It did not make economic sense for banks to do everything manually,” says Ang.

That challenge held banks back from providing more invoice financing services to SMEs, he adds. “So, we created a centralised digital platform that would allow all parties to communicate and manage the workflow and validation process … It was a pain point for the banks and they were eager for solutions.” The company worked with banks, which purchased the invoices, to provide liquidity to the suppliers of blue-chip companies in Malaysia. This ensured more security as the customers were unlikely to default on their payments.

Last year, the team applied to become a P2P financing platform operator under Bay Smart Capital Ventures Sdn Bhd so it could open this investing opportunity to retail investors. It is a good asset class for investors, the founders believe. Since the issuers of invoice financing notes are supplying to blue-chip companies that are likely good paymasters, the investment risk is lower. Meanwhile, the demand for invoice financing is high among SMEs, they say.

“We realised that supply chain financing is a very good asset class to invest in, but it wasn’t available to the [retail] investor. Our idea of starting a P2P financing platform is to allow retail investors to invest alongside large corporate lenders and financial institutions in the same deals,” says Ang.

CapBay had a soft launch of the platform in July. During the pilot period, the team financed about RM20 million worth of deals on its P2P financing platform, according to Ang. The team officially launched the platform this month.

CapBay is currently working with four financial institutions and has provided almost RM800 million worth of financing to SMEs, says Ang. Of these, two have given retail investors the opportunity to participate in their supply chain financing deals.

How is the company different?

CapBay is the third local P2P financing player to focus on invoice financing. What sets it apart from the other players in the industry is its expertise in this area, say the founders, as they have a track record of providing this service to banks.

“The whole idea of starting the P2P financing platform is to provide retail investors with access to high-quality investments alongside large corporate investors. They will be able to invest alongside institutional investors,” says Ang.

Between 90% and 95% of the invoice financing notes will have this structure, says Ang. While some of the other P2P financing platforms also have this feature, the extent to which it is available varies.

“A typical invoice financing note works in a way where the customer pays an SME supplier, who then pays us back. If there is any issue, we will have to sue the SME [who may not have many assets]. So, we want to be able to go to the large corporation, who is the customer, and receive the payment directly. This is how we can keep the default rate low,” he says.

According to Ang, the platform’s default rate is zero at the moment as all late payments have been recoverable. CapBay’s long-term goal is to keep the default rate at 1% or less.

CapBay offers P2P financing notes with potential returns of up to 14% per annum and note tenures ranging from one to six months.

Why invest in P2P now?

Cognisant of the tough economy, CapBay will focus on financing suppliers to the government or government-linked corporations (GLCs) this year as they are considered more reliable paymasters. “It is all about confidence in the next few months. We will also come up with a lot more products that carry lower risk and are securitised, collateralised or principal-protected. We are discussing some of these products with the Securities Commission Malaysia and hope to launch them soon,” says Darrel.

For instance, it recently announced that it is the only non-bank participant in Telekom Malaysia Bhd’s (TM) vendor financing programme. This will enable its P2P retail clients to invest in invoice financing notes issued by TM’s suppliers.

These notes can be considered a relatively safe asset class as it is backed by TM, a large blue-chip company. Now, CapBay’s P2P investors can diversify into notes backed by government and large corporate receivables while earning healthier returns, say the founders.

“We have a lot of incoming government sector vendors as issuers, so we believe that no matter how bad the economy is, that is probably the safest area to be in. Kenanga has been doing government factoring (a type of invoice financing) for many years and the defaults are negligible. Government receivables can weather multiple crises,” says Ang.

During the pandemic, CapBay tightened its credit screening and chose its issuers more selectively. This is likely to continue for the rest of the year.

CapBay also works with financial advisers who introduce this asset class to high-net-worth individuals. For these investors, P2P financing notes form the high-yield and aggressive portion of their portfolios. They like this asset class because it is less impacted by market movements.

“P2P financing has a much lower correlation with the other asset classes. When interest rates drop, P2P financing rates do not drop as much,” Ang points out.

He adds that investors should consider P2P financing at this time because it could offer relatively higher returns than fixed deposits or bonds. “Investors who want to hold on to some cash as they wait for investment opportunities in the market or those who want liquid assets could consider investing in these short-term financing notes that deliver healthy yields.”

The minimum initial deposit required for CapBay’s P2P financing platform is RM10,000, which is significantly higher than on other platforms. The founders say this is because they want to target more experienced investors.

“We want investors who understand the correlation between risk and return, know what they are doing and can appreciate what we are doing at CapBay,” says Dion.

The investors will be attended to by dedicated relationship managers, say the founders.

As investors in their early thirties, the founders of CapBay are in the same age group as the majority of those who invest in P2P financing in the country, according to data provided by the Securities Commission Malaysia (SC). According to its June statistics, 63% of the investors on these platforms were below the age of 35.

As expected, the founders are invested in P2P financing notes. In fact, many of them began investing in this asset class when they were studying abroad, mainly out of curiosity, even before P2P financing platforms were available in Malaysia.

Of the four founders, CapBay CEO Ang Xing Xian is probably the most aggressive investor in this asset class, having invested in many P2P financing platforms globally. After graduating with a master’s degree from the University of Oxford, he worked briefly at MarketInvoice, a P2P financing platform in the UK.

This experience led him to observe that P2P invoice financing notes tended to perform better and that fully notified factoring, where the invoice debtor pays directly to the P2P platform, can lower default rates. “I invested in P2P financing platforms in the UK, Indonesia, Australia, the US and even Singapore. From this experience, I could identify the good platforms from the bad ones. I also realised that [financing notes for] trade-related assets tend to perform better, have low default rates and are relatively short term,” says Ang.

“If you dig deeper into platforms specialising in invoice financing [which is a type of trade financing], you will find that how the platforms execute the financing makes a huge difference to the default rate. A platform that does it properly [using fully notified factoring] can usually keep its default rate between 0.8% and 1%, which is the global average for P2P financing platforms.”

Meanwhile, chief business development officer Darrel Ang, who comes from the same alma mater as Ang, wrote his master’s degree thesis on P2P financing in the UK. “In 2012, I looked at whether P2P financing would be the future of SME financing. I analysed the types of borrowers on the platforms and the reasons they wanted the financing. I found that sometimes it was because banks weren’t serving them or the speed at which the funds were disbursed was slow,” he says.

He also observed that P2P financing companies started to emerge in the UK after the 2008 global financial crisis as banks were facing a credit crunch. “Smaller companies were looking for financing while investors were looking for yield due to the low interest rate environment. It was a good time to consider alternative investments,” he adds, noting the similarities between that period of time and now.

Based on his observations when investing in P2P financing platforms, Ang wanted to create a platform that used technology to solve problems so he could provide financing without taking on additional risk. That is why he launched CapBay, which has the technology to digitise supply chain financing and thus, improve the communication and validation processes between banks, issuers and the paymasters.

In addition, the CapBay founders decided to use the fully notified factoring model and work mainly with issuers who are suppliers to blue-chip companies, the government and government-linked corporations. These steps would add another layer of security to the investments.

“We are just unlocking their cash flow so they can expand their business,” Darrel points out.