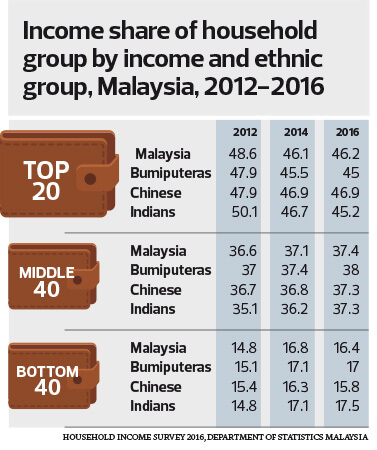 MALAYSIANS would be familiar with the fact that the bumiputeras form the biggest proportion of households in the bottom 40% in terms of income. Data from the Economic Planning Unit for 2014 shows that bumiputera households accounted for 44.7% of those in the B40 category, defined as households with an income level of RM2,629 and below.

However, what many are unaware of is that the intra-ethnic income gap is the highest among the Chinese compared with the bumiputeras and the Indians.

Not only that, this gap has widened for specific groups.

Among the Indians in the same period, the income gap narrowed from RM5.50 to RM5.20, and was the smallest among the ethnic groups.

What is significant, says Dr Muhammed Abdul Khalid, chief economist at policy research consultancy DM Analytics, is that the income gap in Malaysia has not narrowed since 2014 despite the introduction of key measures to achieve a better distribution of wealth.

The measures include BR1M (Bantuan Rakyat 1Malaysia), an increase in the minimum wage and a reduction in the personal income tax rate.

“This will make achieving the 11th Malaysia Plan target of 20% share for this group more difficult.”

Another aspect of the issue that bears emphasising is that there is no cross-cutting implementation mechanism that addresses the consequences of these inequalities, says Datuk Dr Denison Jayasooria, principal research fellow at UKM’s Institute for Ethnic Studies.

The intra-ethnic income gap shows just why such a holistic response to the problem is important.