THE cooling property market over the past few years has had an impact on developers, judging from their increased inventory levels and lower profit margins this year compared with levels seen prior to 2014.

S P Setia explains that the spike was partly due to a change in its accounting policy.

“We also wish to point out that the inventory figure of RM1.009 billion on our balance sheet as at Sept 30, 2017, represented completed stocks only. Stocks are classified as inventory immediately upon vacant possession — an accounting policy that we adopted in 2015.

“We understand that there are developers that only classify completed stocks as inventory after the expiry of the defect liability period, which was our former accounting policy,” says the developer.

As the completed stocks are recognised as inventory at an earlier date — right after the receipt of the certificate of completion and compliance, rather than after the defect liability period — this has accelerated the growth in inventory levels.

However, the main factor behind the ballooning inventories is likely to be dampened sales following the cooling measures introduced by the government, which had outlined several measures in Budget 2014 to rein in increasing property prices.

The impact of these measures can be seen in the downward trend in developers’ total revenue, which was on an upward trajectory from 2012 to 2015.

Total property development revenue of the nine developers covered by The Edge touched a high of RM15.13 billion in 2015, from RM9.12 billion in 2012, before settling at RM12.6 billion for the 12 months ended June 30 this year.

Developers’ gross profit margins have also come down on average over the past five years — from 29% in 2013 to 24% for the 12 months ended June 30, 2017 — squeezed by rising construction, labour and land costs.

An analyst with a local research house says now is not a good time to be a developer amid the shift in demand towards affordable property, which does not offer margins that are as attractive as the high-end segment.

“Margins have come under pressure as there has been sort of a price ceiling after demand moved to the affordable range. And this has been made worse by the DBKL (Dewan Bandaraya Kuala Lumpur) freeze and tighter lending policies of banks.

“All avenues for growth for property developers have been capped,” says the analyst.

The analyst adds that only those that had carried out their landbanking exercises earlier — for example, UOA Development Bhd — have managed to retain their margins, despite the general slump in the local property market.

Since 2012, UOA has managed to maintain margins of around 40%, despite seeing a decline in property development revenue starting from 2015. Its profit margin for the trailing 12-month period ended June 30 this year stood at 48%.

“UOA has seen phenomenal margins because it acquired land and held it for a while before deciding to develop it, giving the company the advantage of lower land cost.

“It all boils down to the developers’ ability to find cheap land for them to make margins but nowadays, not many people are letting go of their land on the cheap,” the analyst explains.

Other developers that have been able to maintain margins over the years include S P Setia, at around 20%, and KSL Holdings Bhd at between 30% and 40%.

Amid compressed margins, some developers have found it more feasible to sell vacant parcels of land rather than develop them, which could be part of the reason behind the slower sales over the past few years.

“Yes, selling land will get you gains in the near term. Some developers, such as UEM Sunrise and Sime Darby Property Bhd, can afford to sell and book gains as they have huge land banks.

“But in the longer term, developers will still need to develop [properties],” she adds.

Meanwhile, the average margin of property developers has been relatively stable since 2015 — at 23% to 25% — as the companies have moved to cut cost via different avenues (see main story), including locating the parking area above ground and reducing the number of elevator wells.

The total property development revenue of the nine developers observed has come down since 2015 — versus the upward trend seen from 2012 to 2015 — which could be sustaining profit margins as well.

A closer look at the data, however, shows that some states and territories have actually seen a higher number of launches and increased sales for 1H2017.

While the outlook for the local property sector remains uncertain, Kenanga’s Lim says the property market is definitely bottoming out as developers adjust to the new environment.

Despite the tough lending situation, she says the right product at the right location will sell. “I think that the market is at the low of its low now and we are definitely bottoming out.

“The market is ready to take the bull by the horns, but it is unlikely that we will see strong growth for developers within the foreseeable future.” 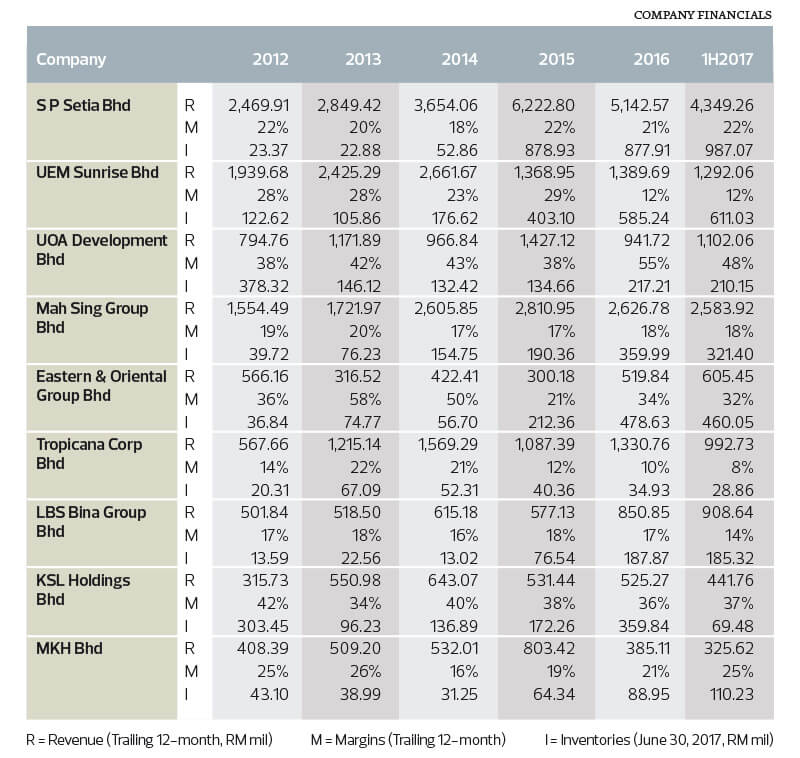