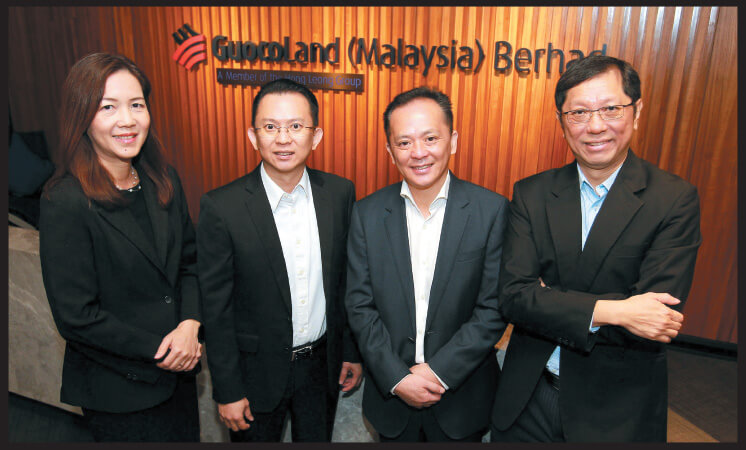 From left: Lung, Quek, Kong and Lee. Photo by The Edge 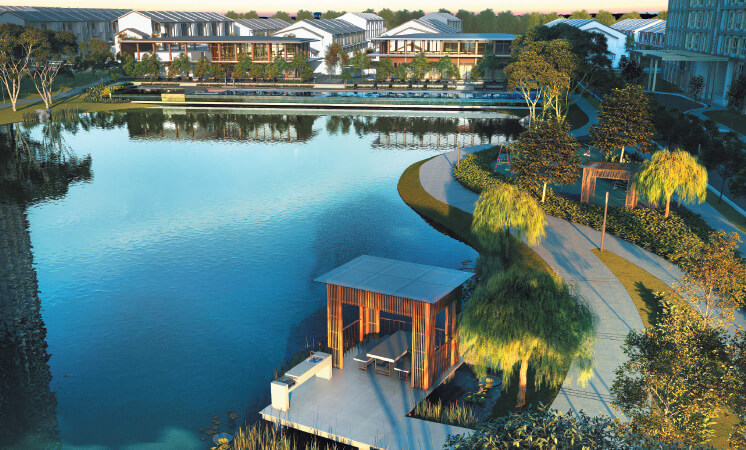 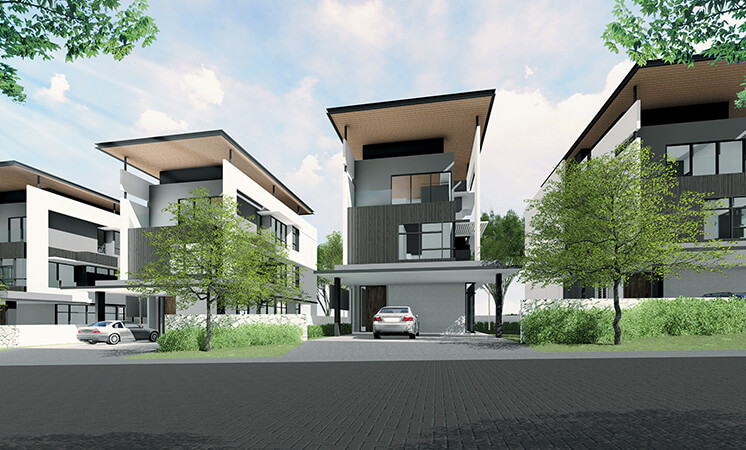 THE sleek Wisma GuocoLand in Damansara City still had that “new smell” when we paid its developer, GuocoLand (M) Bhd a visit recently.

“We just moved in about three months ago. We should have a building that is reflective of the quality of our developments,” says Datuk Edmund Kong as he greets us warmly.

Kong officially took over as group managing director in January 2016. With more than 26 years of property development and construction experience under his belt, Kong has a big task on his hand.

“In terms of size, GuocoLand is small. Tan Sri Quek [Leng Chan, the founder of Hong Leong Group Malaysia,] started GuocoLand about 30 years ago, but after seeing how other property developers have grown so much, he decided it was time to do the same here,” says Kong, explaining the company’s new impetus.

The first thing step was to strengthen the team. After Kong came in, the key management team was rebuilt.

“In order to grow, we need good people. We sell people properties based on a piece of paper and pretty pictures. They are betting their life savings on [our products], so it is so important that we deliver. Getting the team to believe in our business model and vision is very important. Getting them to buy into what matters to our buyers is also very important. Buyers look at tangible values. Planning, execution and timely delivery are important to the brand DNA,” says Kong.

In recent years, GuocoLand has raised its profile with the launch of the 8.5-acre Damansara City. With a gross development value (GDV) of RM2.5 billion, it comprises Wisma GuocoLand, DC Mall, Menara Hong Leong, Sofitel KL Damansara and DC Residensi.

“Hong Leong as a group has a strong brand perception and we are strong financially as well. These are plus points for us — I always say we have a big mountain behind us. However, GuocoLand in Malaysia has been lying low and was not aggressive with launches. So it’s time to tell the market about us,” says Kong.

He adds that with the financial support, buyers can expect better products from the company. “I’m not saying that we didn’t do well before, but I think there is room for improvement when it comes to design and workmanship as well as delivery. It all comes together. The end result is important to buyers,” he says.

“If you look at the launches we have lined up for our new financial year [ending June 30, 2018], they are a quantum leap, because we didn’t really have major launches in the past year.”

Kong’s goal is to turn GuocoLand into a household brand in the next five years.

“We have to make sure where the brand is concerned, people will recognise GuocoLand as a developer that delivers quality products, not only in workmanship but design concept as well,” he says.

“We are looking at sales of over RM1 billion. Of course, this is nothing compared with the big players in the market, but for us, it is very significant. Moving forward, like most companies, we are looking at a compound growth rate of 20 to 25% but it will depend on the market.”

GuocoLand has planned launches worth more than RM3 billion in FY2017.

The company’s focus at the moment is on its new launches and the plan is to grow the brand under the Emerald name.

“We started our journey over 20 years ago in Rawang with Emerald Rawang. I think there is a certain recognition of the name Emerald, so we will continue to use it,” says Kong.

GuocoLand has two sizeable projects in Cheras — the freehold Emerald Hills and Emerald Square. The former is a residential development in Alam Damai while the latter is an integrated commercial development near an MRT station.

“They are different and target different markets. Emerald Square will be more vibrant because of the MRT connectivity while Emerald Hills will be more laidback and thus a nice place for residences,” says Kong.

Located on the highest point in Alam Damai, the 47.36-acre Emerald Hills will comprise 1,378 condominium units and 181 two- to three-storey terraced houses. The condo units range from 805 to 1,125 sq ft, while the houses measure 22 x 75 ft. The project includes 21 acres of open space. It has a GDV of RM963 million and its launch has been scheduled for 4Q2017.

The 10.74-acre Emerald Square is in Batu 9. It will comprise serviced apartments, a hotel and offices. It has a GDV of RM1.5 billion and is schedule to launch in 1Q2018.

Meanwhile, Emerald Rawang will also be seeing some changes in the landscape.

“There are a few projects within Emerald Rawang that we will launch this financial year. There will be terraced houses, zero-lot bungalows and, depending on the market, maybe a condo as well,” says Kong.

GuocoLand is replanning the remaining 360-acre master plan of the 1,000-acre township. With a GDV of RM2.5 billion, it will include a central park, recreational centre, commercial centre, townhouses, terraced houses, condos and zero-lot bungalows.

“We are going to [add] the lifestyle factor [to it]. Twenty years ago, people bought houses as a place to stay. Nowadays, it is different. ‘Lifestyle elements’ has become the [buzzword],” says Kong.

“We are going to do a mix of products ­­— townships, standalone and integrated developments. Townships are for the long term and they are good for branding because of the journey. For standalones, we will still focus on the lifestyle elements and look at the various ways we can create value for our customers,” says Kong.

“We are also looking at other aspects such as shared office space with facilities. These days, a lot of businesses are no longer looking for their own space.”

Since smart homes have become a hot topic, all of GuocoLand’s new products will have smart features and the developer is exploring various products to decide which to include in each project.

“We are working with a few companies but it is still very new. We are deliberating whether we have the mass to develop the smart systems ourselves. I have been asking the team, why do we want to get a third party to do this? Hong Leong Group is big. We can even tie up with the bank for this intelligent system,” shares Kong, adding that no decision has been made as yet.

“Supermarket BIG is coming in by end-October or November. DC Mall is more of a destination mall. You come here because there is a certain retail or F&B outlet you want to go to. About 60% to 70% are F&B outlets. And of course, we have F&B outlets that will cater to the working population of 5,000 to 6,000 here,” says Kong.

“We just had a soft opening for the hotel on Aug 8. There has been a lot of talk about Sofitel and its design. This is the first Sofitel in Malaysia and we will set a new benchmark with it,” he says.

Looking further ahead, Kong says GuocoLand has over 7,000 acres of land in Jasin, Melaka, and Sepang, Selangor, and over 400 acres within the Greater KL.

“The large landbank we have in Jasin (3,869 acres) can’t be unlocked immediately. We are looking for partners and investors to come in because we have to create economic activity in the area,” he explains.

However, he adds, the Melaka state government and the provincial government of Guangdong, China, will be developing the Melaka-Guangdong Industrial Park in Jasin, which can help unlock the landbank.

As for the Sepang land, although its position next to the shoreline and Avani Sepang Goldcoast Resort adds a notch to its quality, enticing investors to come on board is the next challenge.

“We have to move this project in a big way and we have to create economic activity,” Kong says. “We have done the master plan and the next step is to talk to investors and maybe even partner with foreign developers.”

The Sepang land is separated from its existing township, Pantai Sepang Putra, which will see two launches in 4Q2017. One consists of 44 units of two- and three-storey shop offices (GDV: RM50 million); the other consists of 80 units of single-storey terraced houses (GDV: RM28 million). Combined, the townships have an acreage of 3,879 acres.

“We are hungry for land. We are looking at growth areas like Penang and even Kota Kinabalu in Sabah, and although the market in Johor is slow right now, it will come back. In the long term, [the property market in] Johor and Iskandar Malaysia will be good,” Kong says.

“Moving forward, we will look at how we can share our plans and vision with our stakeholders. It will take some time but as I always say, seeing is believing.”