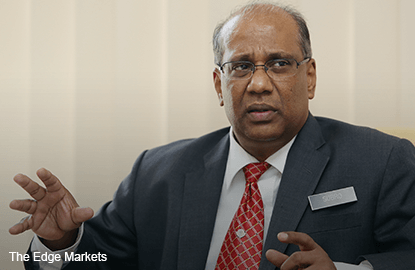 DESPITE the government declaring the Goods and Services Tax a success and how it has helped shore up its coffers in the light of the slump in oil revenue, critics continue to condemn the unpopular consumption tax. Businesses are also grumbling about its execution.

However, the deputy director-general of Customs in charge of GST implementation Datuk Subromaniam Tholasy says despite some teething problems, everything has gone fairly well. The following is an interview with him a year after GST came into force.

The Edge: GST is often blamed for the price increases that we have seen over the last year. Do you think that is the case?

Datuk Subromaniam Tholasy: If you really dissect it, prices went up just before GST was implemented. People tried to advance their purchases, so it became a supply and demand issue. Unfortunately, we were moving from the old tax system, the Sales and Services Tax (SST), which is insensitive to price elasticity demand. This means that once prices go up, they stay there.

The other factor is the 18-month moratorium on profit margins under the Anti-Profiteering Act 2011, which took effect on Jan 1, 2014. When businesses knew that their profit margins were going to be fixed for the next 18 months, what did they do? Increased prices before the moratorium took effect, didn’t they?

There were also factors beyond the government’s control, like the ringgit’s depreciation. You can’t blame GST for that. When the ringgit weakens, imports become expensive, which pushes up prices.

So, how much of the price increase can be attributable to GST?

It’s very minimal. Our studies show that prices went up a bit after GST, but it is a one-off increase. It is not something that only happens to us. All the other countries implementing GST have seen similar increases.

Sometimes, people fail to understand the benefit that GST brings in the long term. It provides more transparency. And the cost savings [enjoyed] by businesses will flow through. More importantly, we now know the profit margins being made by every industry and every business and very soon, you will see some initiatives. Consumers should welcome this. Previously, nobody knew who was making how much and at which level.

Does this mean that the government is considering taking steps to regulate businesses?

It gives us an opportunity to look at it. Moving forward, we would know how to tackle issues, whether at the production level, the middle-man level or the retail level.

But that wouldn’t be a free market anymore, will it?

It will still be. Previously, the government had very little information on margins. Sometimes, we ended up barking up the wrong tree. The GST data will provide more insights into margins. We also capture it by code, which allows us to dissect by product.

I’m not saying that we’re going to regulate businesses or anything like that. What I’m saying is that the government will have a better understanding of business margins. So, when there is a need to intervene, we can do so.

Are we on track to reach the RM39 billion in GST collection as projected in Budget 2016?

I don’t want to answer questions on revenue. I will leave that to the prime minister to announce when the time comes.

What would you say contributed to the successful implementation of GST over the last year?

Some of the success can be attributed to engagement with the private sector and the availability of the director-general’s decision so that people understand [better]. We put in these guidelines one year in advance for businesses to prepare.

If you look at Singapore’s guidelines, some of them are reviewed almost every other year because business is not static. It’s dynamic and it needs new ways of looking at things and here we are, working closely with the private sector. That has helped us to understand the businesses, and vice versa.

So in your view, there has been enough engagement with the private sector?

Yes, we started our engagement on GST many years before the implementation, way back in 2005 when the government started seriously considering it.

There was a series of discussions with businesses to refine the model and [talk about] the issues. We were very open about it. We realised the importance of liaising with these businesses because we are not the experts, the businesses are. They should know how to collect GST, the right amount, they should understand the dos and don’ts. We are just the administration. At the end of the day, the onus is on them.

The only issue was that a lot of businesses did not prepare back then because the government postponed GST a couple of times. It was only when it was announced in Budget 2014 and when there was a definite timeline for the implementation that the businesses started to prepare.

Overall, Malaysia has done quite well in terms of implementation. What do you think we can improve on going forward?

The rate of refund. As at November 2015, we managed to refund 70% in terms of the number of cases within the legislated 14-day period. We can always improve this to 85% to 90%. But to have 100% is impossible as there will always be some suspicious claims that we need to verify.