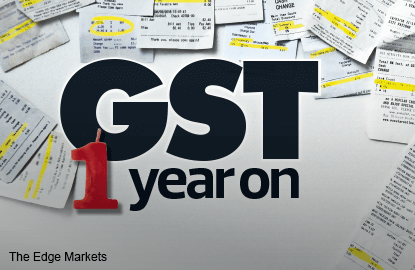 COME April 1, the implementation of the Goods and Services Tax (GST) in Malaysia will reach its one-year mark. The anniversary represents a milestone of sorts, but not everyone will be in a celebratory mood. Some — as many have on the May Days of 2014 and 2015 — will take to the streets of Kuala Lumpur on April 2 with their homemade banners that will read “Batal GST” for a rally organised by the country’s opposition leaders to express their disapproval of the consumption tax.

GST is deeply unpopular among consumers and businesses because of the widely held belief that the consumption tax is responsible for pushing the prices of goods and services upwards.

Malaysia’s headline inflation, as measured by the Consumer Price Index (CPI), growth registered a decline to 2.1% in 2015, from 3.2% a year ago. Much of this was down to lower transport costs. The transport category within the CPI saw negative inflation of 4.5% in 2015, versus 2014’s inflation of 4.9%, as consumers paid less for petrol and diesel after the crash in global crude oil prices.

Although inflation rose slower in 2015, consumers cry that they have hardly felt the difference. It is not hard to see why.

CPI growth was volatile in 2015. It declined sharply at the beginning of the year to a low of 0.1% in February, but climbing up post-GST to peak in July at 3.3% to give consumers a jolt in prices.

There was also a pervasiveness of price hikes across the CPI basket of goods. Bank Negara Malaysia noted in its 2015 annual report that prior to the implementation of GST, the share of items within the CPI basket with inflation of more than 4% stood at 11%. That share grew to 32% in the second quarter of the year. In the second half of 2015, 41% of the CPI goods basket saw inflation exceeding 4% as firms that had initially absorbed GST started to pass the tax on to customers.

Experts say that consumers are not likely to feel the tapering off in prices towards the end of 2015 as prices tend to be “sticky”. Once up, they hardly come down. And this was proven with the release last week of the February 2016 CPI, which surged 4.2% year on year.

Meanwhile, data from the Malaysian Institute of Economic Research indicates that consumers are fearful of higher prices and increasingly reluctant to spend. Its Consumer Sentiment Index dipped to a record low of 63.8 points, falling even below what was seen after the global financial crisis in 2009.

Such weak consumer sentiment was eventually reflected in some of the country’s economic indicators. In 2015, Malaysia’s domestic demand growth slowed to 5.1% from 5.9% in 2014, with private consumption growth moderating to 6%, from 7% a year ago.

Numbers like these help to support the opposition-led calls for abolishing GST and the cost burdens associated with it.

But, it is important not to get carried away. GST was not the only cause of inflation last year.

According to Bank Negara, GST contributed only 0.7 of a percentage point to headline inflation in 2015, lower than originally expected. Government measures, such as the enforcement of the Anti-Profiteering Act 2011 and zero-rating or exempting essential consumer and public goods from GST have helped ensure that price increases are not excessive. In any event, other factors — the government’s subsidy rationalisation plan, the depreciation in the ringgit and the invisible hand of the free market — were not blameless for rising prices.

Moreover, judging GST solely by its impact on prices paints an incomplete picture of its role in today’s economic environment. Many economists and tax consultants consider GST as the “most efficient” way of widening Malaysia’s tax base.

R S Raja Kumaran, executive director of PricewaterhouseCoopers Taxation Services Sdn Bhd says, “In my mind, GST is a good tax. It has brought those who do not pay taxes into the net and has helped the Inland Revenue Board bring people into the net. Now, people will have no choice (but to pay taxes).”

In that sense, GST raises government revenue at a scale and speed that existing direct tax mechanisms would not be able to achieve.

Statistics show only 1.7 million out of the 12.4 million strong workforce pays individual income tax and in 2015 they would have contributed RM28.7 billion or 12.7% of government revenue.

In contrast, the nine-month collection of GST in 2015 is expected to rake in RM27 billion with just over 400,000 companies registered for GST.

The target for 2016 is RM39 billion and few doubt that this will not be achieved. The sum represents 3.1% of Malaysia’s gross domestic product (GDP).

“First, a small portion of the population pays income tax. Secondly, corporate taxes can be susceptible to external factors. For example, with the collapse in oil prices, oil and gas firms will report lower earnings, if not losses. Losses can be carried into the future and a loss-making company could be paying lower taxes for years,” says a private sector economist.

“With GST, almost everyone and everything is taxed. As more businesses are registered for GST, collections will improve,” he adds.

More than the amount it can raise, GST is the government’s most reliable and stable source of income. This is particularly important for Malaysia at this juncture. Credit rating agencies already critical of the Malaysian government’s financial position saw the implementation of GST as the government’s commitment to fiscal reform.

For the moment, at least, this keeps a possible sovereign credit rating downgrade at bay.

Further, the Ministry of Finance Economic Report 2015/2016 states that the government’s revenue collection is anticipated to fall by 5.4% due to the sharp decline in oil-related revenue. Bank Negara reported that oil-related revenue’s share of total government revenue had declined to 21.5% in 2015 compared with 30% in 2014. This is expected to drop to between 13% and 14% in 2016.

Though unintended, economists say that the implementation of GST had come “at the right time”, shoring up Malaysia’s otherwise stretched public finances.

While that is generally true, reluctant taxpayers footing the bill for government spending will find it hard to see what they have gained out of paying billions worth of GST.

Part of the trade-off is the reduction of income tax post-GST. Corporate income tax will be reduced by one percentage point in 2016 and personal income tax was slashed by one to three points in 2015.

But under Budget 2016, the government took a step backwards by increasing personal income tax for the highest income earners in the country by one to three percentage points. And further increases cannot be ruled out.

The sense of being short-changed is compounded by the fact that the government has made little effort to keep to its promise of spending more efficiently, while its debt level hovers near the self-imposed ceiling of 55% to GDP.

In 2015, the government originally allocated a total of RM273.9 billion, an increase of RM9.8 billion compared with 2014’s initial allocation, despite the plunge in global crude oil prices. Out of this, over 80% went towards the government’s own operating expenditure (opex).

While it promised to reduce opex at the start of 2015, the government had last week requested an additional RM5.99 billion to fund 2015’s spending through a supplementary budget in Parliament.

This year, the government is more ambitious. It wants to save RM9 billion from the original sum of RM267.2 billion after recalibrating Budget 2016 to reflect the low oil price environment.

Interestingly, the savings would barely scratch the surface of government opex. Instead, more than two-thirds of the cuts will impact consumers in some way. RM5 billion worth of savings will come from “reprioritisation of development expenditure”, RM200 million from delayed asset purchase and another RM1 billion from lower subsidies on liquefied gas and diesel.

What is clear one year on from the implementation of GST is that the unpopular tax is here to stay. But, calls for its abolishment will be loud as households struggle with shrinking spending power while the government is seen as being unable to cut its own spending.

Before GST and the withdrawal of subsidies on tolls and other basic items, the government was seen as helping out the people. Today, the reverse is true — the public now has to pay more for everything to help out an administration whose finances are not in good shape.