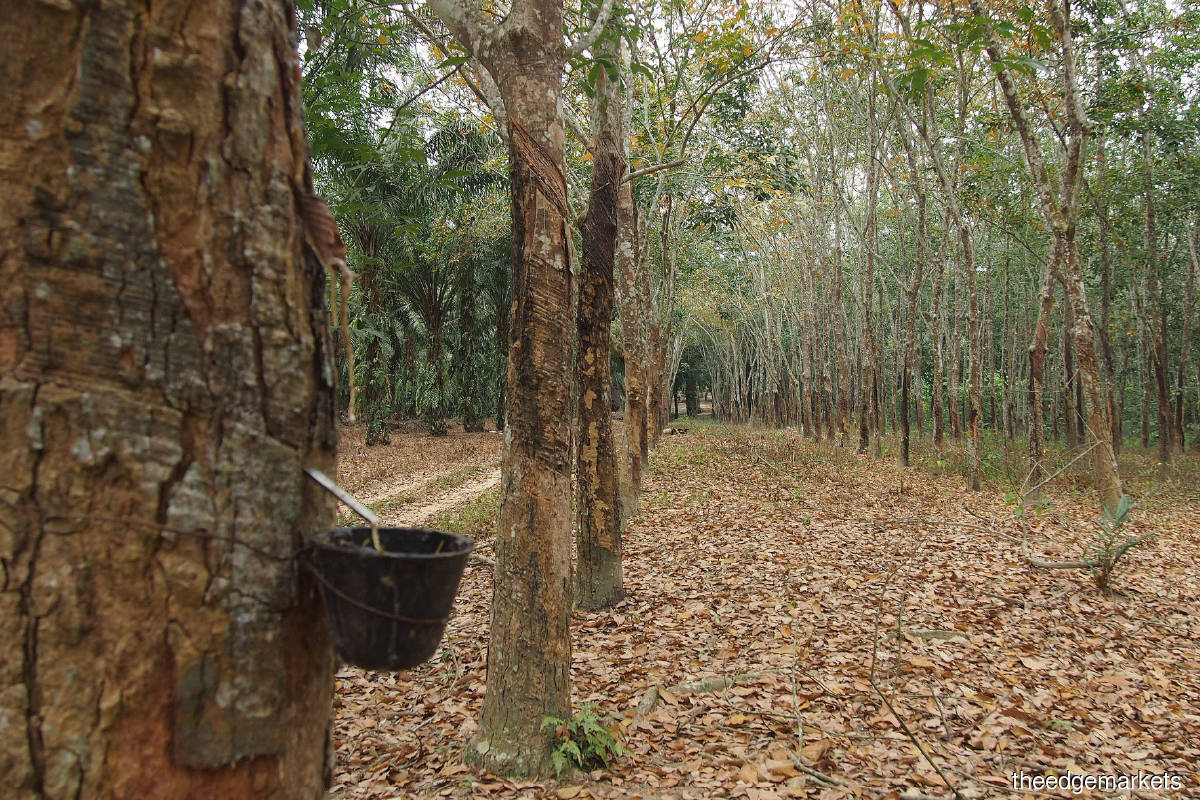 THE Covid-19 pandemic has cast the spotlight on Malaysia’s rubber industry, in particular, on the downstream latex players such as glove makers, which have seen a surge in demand for their products.

One would assume the lucrative profits enjoyed by glove makers as a result of the pandemic would have a positive knock-on effect on the rubber industry as a whole. However, this is not exactly true.

The issues plaguing Malaysia’s upstream rubber sector are not new. In fact, they are structural issues that have yet to be resolved owing to the inherent nature of the country’s rubber ecosystem.

For one, the rubber industry is largely dominated by smallholders — 95% of rubber plantations in Malaysia are cultivated by 458,000 smallholders, with the remaining 5% being commercial estates. The Malaysian Rubber Board or Lembaga Getah Malaysia (LGM) defines smallholders as rubber farmers who own less than 100 acres of land.

“If the price [of rubber] is high, smallholders go to their plantations to do the tapping, but if the price is low, they abandon [their crops].

“In 2019, the total planted area was about one million hectares, and we are actually able to produce at least 1.2 million tonnes of rubber, but we produced only 640,000 tonnes last year. [From that data,] we know that there is a significant portion of rubber plantations that is not being tapped, because of the low rubber prices,” LGM director general Datuk Dr Zairossani Mohd Nor tells The Edge.

The benchmark for Malaysian rubber prices, Standard Malaysian Rubber 20 (SMR 20) Free on Board, had recovered to RM5.59 per kg last Thursday, after trading at a monthly average of RM4.70 to RM4.97 per kg in the past four months, while latex prices were trading at RM4.71 per kg compared with RM4.55 per kg at the start of the year.

The second issue surrounding smallholders pertains to their preferred mode of rubber production. In a nutshell, cup lump production is favoured over fresh latex production, as it is a much simpler process.

“For cup lumps, the smallholder just has to tap, and leave the latex to collect in a cup; overnight, it coagulates. However, for latex production, their work is doubled as they have to tap in the morning and then go later in the afternoon to collect the [fresh] latex,” says Zairossani. The production of latex —which is a key raw material for downstream players such as glove and condom makers, has been shrinking through the years. Last year, Malaysia produced only 36,193 tonnes of latex, which is less than 10% of the 640,000 tonnes of natural rubber produced in the country last year.

“The glove industry consumes about 450,000 tonnes of latex, and we produced around 36,000 tonnes last year. What happens then is that we have to import the remainder from neighbouring countries such as Thailand and Vietnam, to make up for that shortfall.

“So, there is a paradox of sorts, because we have an expanding latex-based downstream industry, but our upstream latex production is shrinking,” says Zairossani.

Again, this issue comes down to price, he explains, whereby the premium in the farm gate prices of latex compared with that of cup lump does not justify the time and effort that needs to be put into extracting the latex.

“In the world market, there is a premium of almost RM3.50 per kg, so ideally, at the farm gate level, the smallholder should get RM3 extra per kilo, but that doesn’t happen.

“This is because with the low latex production volume, there are a lot of costs [incurred] in the rubber supply chain, such as the rubber dealers. There are sometimes two or three layers of dealers, and they are charging more because of the low volume being produced.

“So, at the farm gate level now, the smallholder is getting a premium of less than RM1 compared with the premium of RM3 in the international market. That RM1 is not attractive enough [for smallholders to opt for latex production],” he says.

As for cup lumps, rubber expert Dr Sivakumaran Seenivasagam, who was formerly the director of production research and development at LGM, explains that cup lumps are sold to SMR factories that produce SMR 10 or SMR 20 grades.

“These grades are entirely used for the manufacture of different types of tyres. Nearly 60% of natural rubber produced globally is consumed by the tyre industry,” he says.

Zairossani says the open concept of the rubber industry, whereby manufacturers can import latex from other countries at zero duty, has made it easier for glove makers to import the latex that they require, rather than sourcing it locally.

“Glove makers can assist [smallholders] by committing a certain percentage of their raw materials to local supply. For example, if they are importing 90% of raw material from other countries, they should gradually reduce that to, say, 80%, so that we support our local market.

“Of course, this may come at a more expensive cost to them, but it’s a chicken-and-egg situation. Our smallholders can produce more competitive latex prices if they have the volume, but they don’t have that at present, and hence it is more expensive,” he says.

Sivakumaran says in the past, glove manufacturers were not able to give a good premium to smallholders as they claimed that because of the lower selling price at that time, their margins made per glove piece were very small.

“However, the situation may have changed now with the Covid-19 pandemic, and it is likely that glove manufacturers are fetching a better price for their gloves owing to the rising demand globally. Hence, they may have more latitude currently to consider paying a higher premium for latex and this will encourage the smallholders to opt for latex production.

“Over the long term, it would definitely be prudent to be less dependent on latex imports from Thailand as it must be noted that even Thailand will expand and increase its number of glove manufacturers owing to the current global demand and thus may impose restrictions on export of latex to neighbouring countries.

A glove maker tells The Edge they are willing to support the local latex market, but qualified that it has to be on commercially viable terms.

“At present, the price for glove makers to source latex from Malaysia is higher than it is for us to import from Thailand. The reason is because Malaysia does not enjoy economies of scale in the production of latex, and there isn’t an ecosystem to support this. Should there be efforts to revive it, it should be on commercially viable terms for all parties, because the issue with the present ecosystem is that at every layer, there is a party that wants to have a cut, which makes the price expensive and, in the end, it’s the smallholders who suffer,” says the glove maker.

Even so, buyers of gloves in Europe and the US prefer nitrile gloves due to the perception that they have a lower rate of allergens. And for glove makers, the low oil price keeps the cost of synthetic rubber cheap.

To help our smallholders, Zairossani says it is vital to create the infrastructure for them to produce latex, as well as to equip them with the technical know-how for latex production.

“We had that in place before, but over the years, we shifted from latex to cup lump production and we lost that infrastructure, such as latex collection centres, which need to be set up for every 500ha or 600ha [of rubber plantation]. Such centres are not required for cup lump production.

“We also need to train our smallholders, because to produce latex, certain skills are required, such as field hygiene,” he says.

Initiatives taken by the government include the Rubber Production Incentive (Insentif Pengeluaran Getah), which was introduced in 2015 — the government pays a maximum of 90 sen additional on top of the current prevailing latex prices — and the annual replanting programme.

“Rubber trees have to be replanted after 25 years as they have reached the production limit. The funding for the annual replanting programme comes from the rubber cess, which is like a tax. So, for every kilo of rubber that smallholders produce, they pay 14 sen, of which 10 sen goes to the Rubber Industry Smallholders Development Authority (Risda), which handles the annual replanting programme, while four sen goes to LGM for research and development purposes.

“Through Risda, the government is trying to replant a minimum of 25,000 per ha (per year), depending on the budget allocated. Now, we want to introduce a policy whereby the rubber that is replanted is ready for intercropping. In other words, in the first five years, when the rubber trees are not ready to be tapped, cash crops such as bananas, chillis and pineapples can be planted to supplement the income of the smallholder.

“Our data shows that if smallholders were to do intercropping, by growing pineapples, for example, they are able to increase their income to up to RM4,000 per month, compared with about RM1,500 per month if they just continue to focus solely on rubber,” Zairossani says.

In terms of technology, LGM is working on developing new rubber clones that can produce more yield.

“These new high-yielding clones can produce 3,000 kg/ha per year. In the past, we had clones that could produce up to 2,000 kg/ha per year, so through technology, we are increasing the production of rubber,” says Zairossani.

The only exception to this are the clones planted by smallholders because they depend on a replanting grant from Risda, which recommends the clones that they can plant in order to qualify for the grant.

“Risda also provides the necessary technical support to ensure that the planting is carried out successfully and the trees are brought to maturity within the stipulated period,” he says.

Switching back to latex

Zairossani says up to the early 1990s, latex production was strong in Malaysia, with the country being the top rubber producer in the world at that time.

“Back then, most of the smallholders comprised the first generation of tappers, who were dedicated to the process as they depended on rubber for their main source of income. Now, we have the third or fourth generation, for whom rubber is no longer the main source of income, and therefore they opt for cup lump production as opposed to latex production. Basically, they are not aware of the value in producing latex,” he says.

Bringing back the glory days of rubber would mean recognising the strategic importance of latex production, given its important role in the country’s exports. To illustrate, latex products made up RM5.22 billion, or 83%, of Malaysia’s total export of rubber products in the first three months of 2020.

“The country needs more value, and for that, we need to have more latex production as opposed to cup lump, to increase the competitiveness of our gloves and downstream latex products sector. Even for block rubber, we should be focusing on SMR-L and SMR CV, which is derived from latex.

“In order to do this, the whole ecosystem — the downstream, midstream and the smallholders — needs to work together,” says Zairossani.

Sivakumaran concurs, adding that the plight of the upstream sector, in particular, the unorganised smallholders, can no longer be ignored.

“The unorganised smallholders cannot continue to be ignored because they by default are going to be the mainstay of the natural rubber industry in Malaysia. Their economic survival is absolutely necessary if the downstream industries are to survive and continue to grow,” he says.