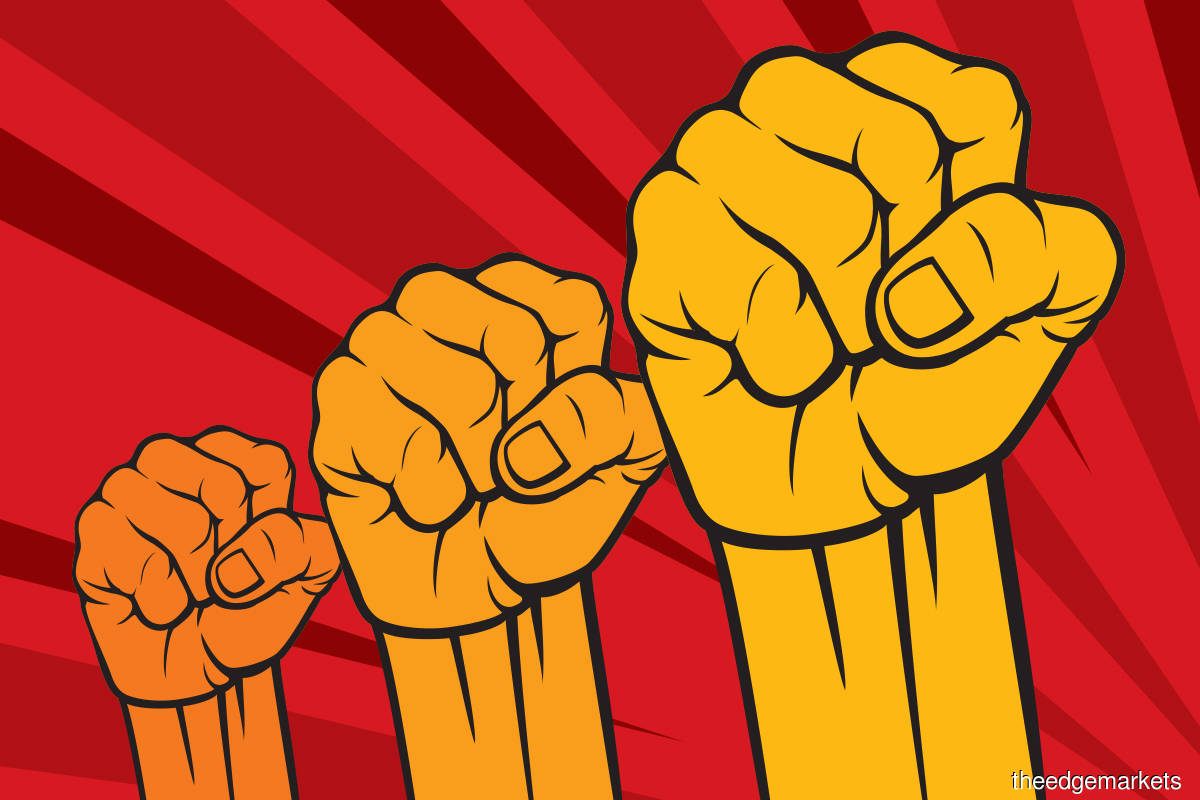 In a social media protest on May 3, Malaysians rallied behind #MigranJugaManusia, which translates to “migrants are also human”. This was in response to immigration raids targeting undocumented migrants at the height of the Covid-19 pandemic in late April.

The series of posts vilifying the sweeping detainment of migrants and refugees flooded social media platforms, especially Twitter, and continued to rage on. As the global pandemic and mandated social distancing measures emptied the streets, civil disobedience and direct action moved online and are being carried out in increasingly novel ways.

Some of the most notable ones are the Black Lives Matter (BLM) movement and the annual demonstrations such as climate strikes and the LGBTQ Day of Silence — signalling the extent to which social media has evolved from a communication tool into a critical channel for social justice movements organising larger forms of activism.

In a space made up mostly of ephemeral content, there has been a surge of compelling and thought-provoking calls to action. Coupled with graphic messaging, individuals from all walks of life are amassing to address and unearth issues which would otherwise have drawn little attention.

Protesters are mobilising for far more than single issues online as the new normal might last for a while. Their primary demands — from freedom of speech to economic equality to climate change — are set against a backdrop of questioning the status quo more broadly, especially racial inequities. Digital activism, sometimes known as hashtag activism, is growing because everyone has something they would like to change about society, says Dr Rachel Gong, senior research associate at Khazanah Research Institute. Social media has given people an opportunity to get involved in collective action, at a low cost and with lower risk, she says.

“Collective action and social movement scholars generally say that meaningful activism incurs a cost. For example, time, money or effort. If we want to be generous, reposting something on social media as an act of protest, which may be called digital activism when it acts as a signal to your network, has a potential cost to your identity or reputation.

Thus far, rapidly rolled-out changes have largely meant ramping up existing resources to make them suitable for digital strikes. Everything digital has become more visible during this pandemic, Gong notes. “I think digital activism gives people options and opportunities to engage with society, with politics, with big issues. I think that’s important because it’s part of growth and maturity — personal and national — to be able to speak one’s mind and defend one’s position with reason,” she says.

The Loud Asians, for example, was founded on the belief that there needs to be conversations and awareness on Southeast Asian stereotypes and social constructs.

The page, which now operates solely on Instagram, was set up after the founders dealt with racial slurs ignited by the remake of Dayang Senandung, a 1965 film based on Malay folklore. Dayang is a princess cursed with black skin at birth who becomes progressively lighter-skinned as the curse is lifted after a series of trials and tribulations.

“The founders (of The Loud Asians) did a piece on Dayang Senandung and all they wanted to do was rant; you know how people create an account just to rant? They did that but they didn’t expect it to get 200 to 300 likes. Many people resonated with it and in less than two days, the post garnered 6,000 likes,” says Dewi Ridzuan, the group’s publicity director. Since its first post on June 19, the Instagram page has garnered more than 16,000 followers. Emboldened by the reception, the founders assembled a team and decided to use the page as a platform to encourage dialogue and discussions on uncomfortable truths, taboos and thorny subjects ranging from race relations, custodial brutality, deaths and even sex education.

“The main reason we have kept going is that we don’t have an avenue to talk about these controversial things and that gave us motivation as well and made us more curious about the things around us. This is a way for us to stage a digital protest. We are really trying to shed light on issues that affect us all. There are many great things about Malaysians but we still have a really long way to go before we are truly united,” says Dewi.

Similarly, the people behind Imagined Malaysia (IM), a research project based on the alternative history of Malaysia and Southeast Asia, uses Facebook, Instagram and Patreon to engage with their supporters. Patreon Inc is known as a place where podcasters and other internet creators go to make money through subscriptions.

“We use social media on a daily basis to communicate and publicise the issues that we champion, such as a more inclusive education. We achieve this by interrogating mainstream historical narratives and promoting discourses that have been marginalised by the powerful,” says Kalash Nanda Kumar, media and communications officer at IM.

Since the pandemic, there has been a paradigm shift towards methods of organising and educating, he says. “If it has taught us anything, it is that we should fully maximise the utilities that digital technology can provide us. Our annual journal, IM Review, as well as most of our forums and webinars, are now held digitally. One of the unintended consequences is getting audiences from all over the world,” says Kalash.

While some come together to voice their grievances on a collective platform, advocates like Roshinee Mookaiah, who is programme manager at Undi18, uses her personal social media pages to highlight pressing matters. Undi18 is a youth movement that has successfully advocated the amendment of Article 119 (1) of the Federal Constitution to reduce the minimum voting age of 21 to 18 in 2019.

Inspired by how US activists were using their online presence to champion the BLM movement, Roshinee felt she could do more to campaign for causes she is passionate about. Prior to making a conscious decision to use social media effectively for advocacy work, she was already using her skills in psychology, fundraising and marketing to speak on equity in education, mental health and racial representation. A couple of years ago, she founded Malaysian Indian Anthology (MAINAN) where she collects and publishes real-life stories and experiences told by members of the community. She started a passion project, Cukup.club — a blog entirely dedicated to mental wellness — this year.

“Having worked in a number of NGOs, I find that digital campaigns are the most cost-effective. Before the pandemic, the focus was on on-the-ground campaigning and fundraising. But since the Movement Control Order (MCO) in March, there’s been a natural deviation from physical settings to digital platforms.

“I have done several digital campaigns for all my personal and professional advocacy work and have successfully raised money for a number of causes. I’m proud to say that the donations surpassed five digits,” she adds.

For her advocacy work, social media platforms have been successful mainly due to the ease of sharing the posts as well as the accountability and transparency that follows.

Apart from being a pivotal stage for digital activism, social media is also useful in exemplifying best practices.

Initiatives such as Parlimen Digital (Digital Parliament), for example, was a demonstration of how parliamentary sessions could be conducted via online platforms amid Covid-19 concerns.

The project undertaken by youth-led apolitical organisations Challenger Malaysia, Undi18 and Liga Demokratik Malaysia saw 222 youth representatives of the federal seats in Malaysia convene for a two-day debate session to discuss and pass legislation and policies on economic and education issues affecting youth in the country via the online platform. The virtual parliamentary sitting, which was powered by Microsoft Teams, emulated an actual sitting including voting and passing of bills. The session was streamed live on July 4 and 5, recording more than 200,000 viewers for both days, according to a press release by Microsoft Malaysia.

While the move was to encourage better utilisation of digital technology, the committee compiled means to make it easier for others to emulate, says Roshinee.

Online anonymity and end-to-end encryption have made it possible to remain anonymous while advocating and standing up for a cause, but it sometimes leads to inflammatory rhetoric, which is likely to prove self-defeating.

For this reason, Khazanah Research Institute’s Gong says it is important to ensure that everything is done respectfully. Sadly, this is not often the case online. “If the target is a business corporation, [for example] who is much more worried about branding and public opinion affecting sales and revenue, and especially if you have a big name [an influencer of some sort] protesting with you, there’s going to be much more impact on public opinion.

“The whole shaming people thing can get out of hand and have unintended consequences, so there’re plenty of ways in which digital activism can go wrong,” she points out.

Digital dissent in no way negates the purpose of taking to streets. “It depends on the issue itself, and the target of the protest. If you’re protesting against a big structural institution, the reality is that digital activism is not very effective on its own. You can sign a bunch of petitions, you can have a post or an article go viral, but meaningful change isn’t necessarily happening without engaging in other forms of activism as well,” says Gong.

“It’s important that people in a democracy feel like they have a voice, not just a vote, and digital activism is good for that. It gives people an opportunity they didn’t have with street protest — the opportunity to tell their stories and have their stories heard.”

Street protests hold national attention and stay in our collective memory far longer and more effectively than any digital campaign could, says Kalash. “Thus, one form of reach should not negate the other, rather, it should work in tandem.”

“For instance, Imagined Malaysia is a member organisation of Progressive International, a global initiative launched by DiEM25 and The Sanders Institute, which aims to organise movements across continents using the tools of policy, journalism and activism. Lobbying for local community issues could thus be granted a worldwide audience and resources that were originally not within our reach,” he points out.

Gong asserts that the biggest impact of digital activism has been in raising public awareness. “We are seeing issues that normally don’t get air time in the media get organic coverage online because they resonate with people. For example, the discussion around sexual harassment in Malaysia that is calling out people and organisations for discriminating against women and minorities.

“Street protests are important signals that call attention to the fact that a lot of people care enough about a particular issue to come out and make their positions known. However, as with all activism tactics, there’s an ebb and flow. People get protest fatigue. What was once a galvanising show of solidarity becomes routine, or worse, inconvenient. So, it has to be done strategically if it’s to be used effectively,” says Gong.