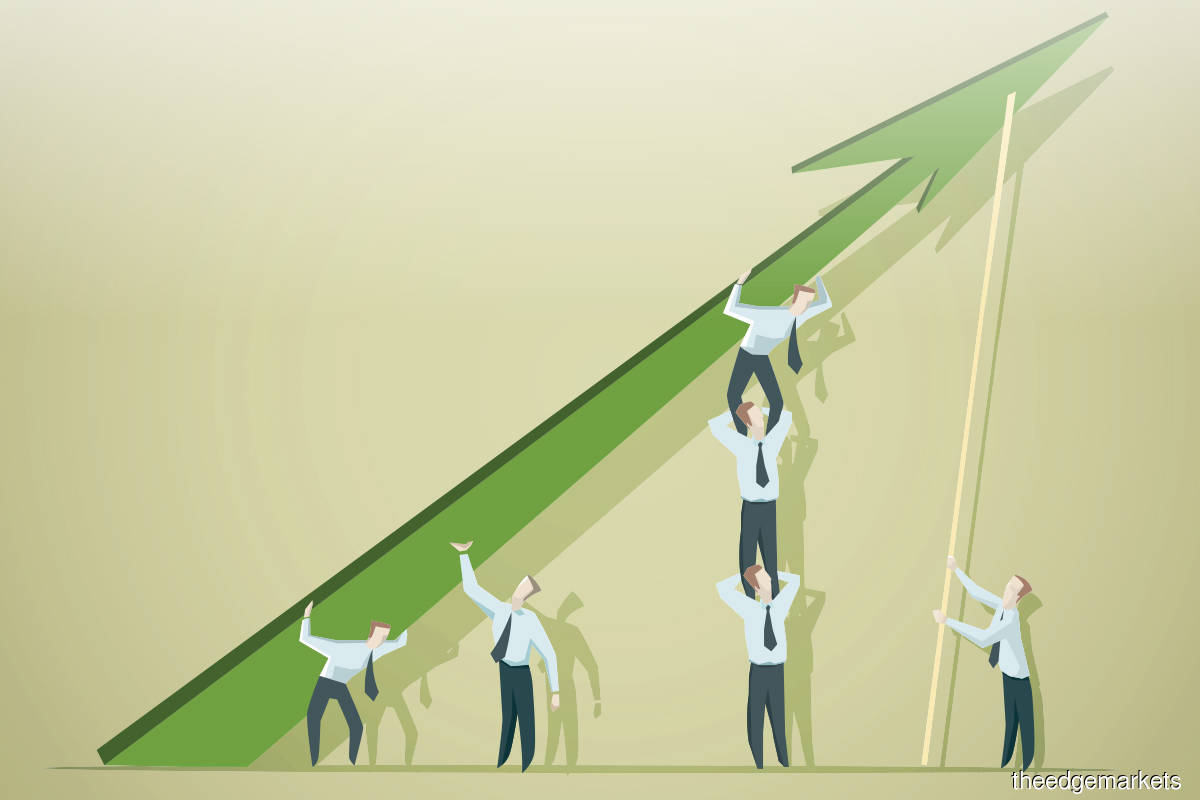 IT has been a tough time for many Malaysians since the Covid-19 outbreak, with a near halt in economic activity and job losses. The country reported its worst-ever GDP contraction of 17.1% in 2Q, making it the worst-performing economy in Asean.

While businesses are struggling to survive and consumers are tightening their belts, investors have been enjoying gains from the nearly six-month-long stock market bull run.

This bull market has been fuelled by retail investors who have extra funds as a result of the six-month loan moratorium offered under the Prihatin economic stimulus package and who presumably were investing as they worked from home. The overnight policy rate, cut a fourth time this year in July to an all-time low of 1.75%, could have spurred more risk taking among investors too.

Indeed, according to CGS-CIMB Research’s Aug 25 report, there were about 2.82 million Central Depository System (CDS) accounts in Malaysia, with the number of new account openings surging 125% year on year to 218,016 in the first seven months of 2020 against 97,027 in the same period last year. Retail participation in the local bourse has also risen to multi-year highs.

There are many examples of people getting wealthier in this market rally, at least according to the retail investors whom The Edge spoke to. There are many anecdotes of investors making a killing in the current rally, including that of an investor who made a whopping RM20 million profit from investing everything he had at the start of the year in glove maker Supermax Corp Bhd.

The question is, are we seeing a trickle-down effect from the bull market to the economy?

Despite the surge in stock prices, economists doubt that there are spillover effects on the economy. “Generally, we are not quite sure how widespread the situation is in terms of retail participation in the market. Apart from glove stocks that have seen more sustainable increases, other counters look more speculative,” says RHB Research Institute chief economist for Asean Peck Boon Soon.

As not all retail investors are making a profit from the stock market, he is of the view that the wealth effect from the share price increase is unlikely to result in a spike in consumption. In contrast, the spillover effect on the economy was much stronger in the 1990s, he observes.

“The situation in the 1990s was different as the economy was underpinned by strong growth, which attracted foreign fund managers to view Malaysia as one of the strong emerging markets. When the stock market started to run, the effect was much stronger as people were getting more pay and more jobs were available.

“But right now, people are worried about their jobs. Therefore, you can see speculation coming back to the market after the interest rates were pushed to low levels,” says Peck.

In addition to household spending, private investment also plays a vital role in resuscitating a weak economy. In 2Q, private consumption and investment fell 18.5% and 26.4% respectively. Former Inter-Pacific Securities research head Pong Teng Siew attributes the low wealth creation effect to the “not too friendly” business environment, which is not conducive for fresh investments. “People are not recirculating the money to the economy through spending or investment. In most cases, [the gains] will just sit still and not do anything for the economy,” he says.

Although there will be some degree of spending among consumers, Pong expects people to hold cash for the time being.

He recalls that in the 1990s, there were many business opportunities for those with the entrepreneurial spirit to tap. “At the time, the economy was booming and we had over 8% GDP growth. Privatisation was in full swing and there were so many business opportunities coming out. Right now, the Recovery Movement Control Order (RMCO) is still being enforced. Things are uncertain for businesses to make decisions.”

It is worth noting that back then, Malaysia registered GDP growth of more than 8% for nine years, starting from 1988. In contrast, Bank Negara Malaysia revised downward its GDP growth forecast for 2020 to between -3.5% and -5.5%, on the back of changes to global growth forecasts and the unprecedented length of the MCO. It had previously forecast growth of between -2% and 0.5% for the year.

Pong cautions that Malaysia could see another round of layoffs later this year if business conditions do not improve.

According to Sunway University economics professor Dr Yeah Kim Leng, the low-income group are not the only ones tightening their belts as the middle and high-income groups also tend to hold back on their spending in uncertain times.

Retail Group Malaysia notes that 2020 has been the worst period for Malaysian retailers since 1987 and expects annual retail sales to decline 9.3% this year.

In view of household spending contributing 55% to the economy, Yeah stresses that boosting market confidence will help support the economic recovery process. “It is important that consumers are not overly investment defensive and keep their portfolio in cash. Daily consumption needs to continue for the money multiplier in the economy to increase. One of the causes of a slow recovery is when the money multiplier effect remains very low, meaning that money is not circulating in the economy at a faster pace as the spending effect is not strong.”

Yeah says that in general, there are short and long-term impacts from the wealth created in the stock market. “In the short term, investors can sell their holdings and convert these into cash for spending. Similarly, for firms, shareholders could dispose of part of the shares to realise the gains, which will eventually translate into disposable income for them to spend.

“In the longer term, with higher valuation, companies feel that they can raise more funds because the value of the collateral (based on the pledged shares) has increased. So, they can increase their borrowings if they wish to raise more capital.”

Nonetheless, the wealth creation from the stock market is likely to be uneven, with only a small population investing in it.

In terms of the overall retail investors’ age, 36% are millennials, 61% are above 40 years old and 3% belong to other groups (below 25 years old, nominee accounts and so on), according to an Aug 18 HLIB Research report. Gender-wise, males make up 71% of retail investors. By ethnicity, the Chinese comprise 70% of retail investors while bumiputeras are close to 30%, from just 20% two years ago.

Geographically, the most active retailers come from Selangor, Kuala Lumpur, Johor Baru, Penang and Ipoh. Retail participation from those in Sabah and Sarawak is still minimal.

With the strong retail interest in the stock market, Yeah cautions about the risk of asset bubbles. “There are concerns about asset bubbles due to a large part of the market liquidity arising from quantitative easing, low interest rates and fiscal stimulus spending by the government being channelled to the stock market.

“Stock prices may not be reflective of the underlying fundamentals. The market is overly bullish, given that the economic prospects remain uncertain and the pandemic is not over yet.”

He adds that stock prices have to be supported by fundamentals — corporate earnings that are tied to economic growth prospects. “If the economic recovery is sustained, then it will drive company earnings. It will be more sustainable compared with the transitory effect of low interest rates, additional liquidity and speculative behaviour.”

Yeah points out that the desired economic effect from the stock market run is to support the economic recovery in the immediate term and to enable companies to raise funds. “The key in the long run is for companies to raise capital to invest and expand capacity, then in turn boost future earnings. Only with good earnings, will their stock prices increase. These are the fundamental drivers,” he says.

Retail investors whom The Edge spoke to generally remain cautious in their spending despite the gains from the stock market, with the settling of housing loans a top priority.

“With the gains that I have made from the stock market, I would consider using part of it to reduce the principal sum of my housing loan, while the rest will be used for reinvestment in the stock market,” says Alan Mu, a manager at a food processing firm.

Another investor says there are no plans to use the gains for big-ticket items, considering the current challenging environment. “We don’t know what will happen to our job next, so it is better to save the money for emergency use or other investment purposes and repayment of loans.”

CGS-CIMB Research’s recent survey shows that most investors plan to reinvest their gains in the stock market. “The second most popular usage is to save the gains for retirement and, third, to support the cost of living, followed by repaying debt and funding children’s education. The least popular usage would be to buy a car, followed by using gains for shopping/entertainment, travelling and purchasing property. This could be due to the subdued economic conditions, which may have led to more conservative spending habits,” the research house says in its Aug 25 report.

As at Aug 14, retail investors had bought RM9.98 billion worth of shares from the stock market year to date, which is four times more than the sum in 2019, according to HLIB Research.

Despite the rise in stock prices amid a pandemic, the feel-good factor seems to be in short supply, limiting the trickle-down effect to the economy. But with a vaccine on the horizon, it remains to be seen whether this will lead to a change in sentiment.