Cover Story: On the defensive LAST week, the global equity rout picked up from where it left off in 2018 amid renewed concerns about slowing world economic growth and the repercussions of the ongoing US-China trade war.

With most of the uncertainties faced in 2018 still unresolved, whether it was the trade tensions, global economic growth, the hiking of interest rates by the US Federal Reserve or Brexit, investor reaction has been to opt for less risky assets.

Areca Capital Sdn Bhd CEO Danny Wong, who believes much of the selldown was driven by negative investor sentiment, advises those who are tired of the volatile market to take a defensive stance for the time being.

“Of course, investors who are weary of the negative sentiment affecting the market can deploy a temporary defensive strategy, pending a clearer picture on the economic front,” he says, adding that the fundamentals of some of the listed companies remained intact.

Acknowledging that it is difficult to time the market, he says long-term investors with an investment horizon of three to five years could start accumulating stocks with strong fundamentals and sustainable business models.

He believes that Malayan Banking Bhd (Maybank) is a good defensive stock for one’s portfolio. It is the largest company listed on Bursa Malaysia by market capitalisation and offers an attractive dividend yield of 6.1%.

Wong opines that the recent selldown presents a great opportunity for investors to accumulate Maybank, which is a solid long-term play, given its dominance in the local banking sector.

“If you look at Maybank, it is giving a good yield of 5% to 6%. While there might be a prolonged weakness in the stock market, it still gives a good entry point for investors who want to have exposure to one of the largest banks in the country. Compared with its high last year, the stock has fallen quite a bit. I think investors can benefit from the sustainable dividend payout as well as the upside potential in the event of a recovery in the stock market as a whole,” he says.

Rakuten Trade Sdn Bhd head of research Kenny Yee also expects volatility to reign this year, emanating from the US as the Fed is expected to continue to raise its interest rates.

“Such volatility is expected to cause ripples in the Asian markets. Overall, we believe investors are now more risk-averse and would prefer to accumulate on weakness in stocks with solid value propositions. As before, there are no outstanding sectors as we prefer to go bottom up,” he says.

Another fund manager with a local asset management company tells The Edge that going for dividend plays, such as real estate investment trusts and consumer-related stocks, would be a good strategy while waiting for a clearer picture to emerge on the economic front. For example, both Pavilion REIT and IGB REIT offer decent yields of 5.4% and 5.3% respectively. They own popular malls such as the Pavilion Shopping Mall, and Mid Valley Megamall and The Gardens Mall respectively and posted higher rental income in their latest quarterly results.

Beverage companies such as Heineken Malaysia Bhd, Carlsberg Brewery Malaysia Bhd, Fraser & Neave Holdings Bhd and Nestlé (M) Bhd could also be good defensive plays. Both F&N and Nestlé were among the top performers last year, recording total returns of 28% and 47.4% respectively, despite the sharp decline in the overall equity market. Heineken and Carlsberg also performed well, recording total returns of 9% and 38.3% respectively in the same period, and offer decent yields of 3% to 4%. 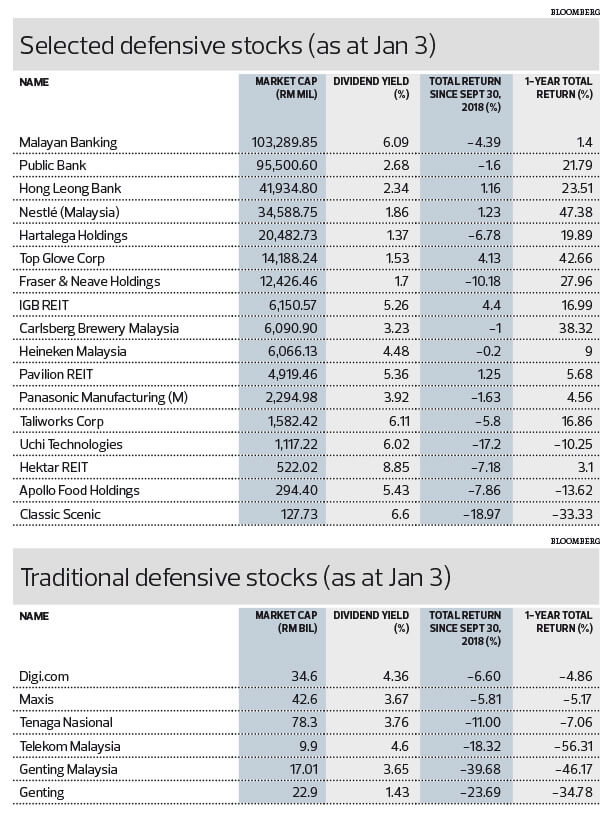 However, the fund manager notes that it is important for investors to look at companies that have a strong balance sheet and are able to maintain their dividend payouts as these could be trimmed if a global economic slowdown hits corporate incomes. He cites Uchi Technologies Bhd, Apollo Food Holdings Bhd, Classic Scenic Bhd and Asia File Corp Bhd as examples.

According to Hong Leong Investment Bank (HLIB) head of research Jeremy Goh, among the companies that are expected to offer attractive dividends is Taliworks Corp Bhd as the Selangor water consolidation exercise should be completed by the first half of this year. “Assuming the management follows the repayment schedule proposed by Pengurusan Air Selangor Sdn Bhd, the company could distribute a total dividend of 7.2 sen, which translates into 9.2% based on its closing price of 78.5 sen last Thursday,” Goh says.

There is also the possibility of a lump sum upfront special dividend if the management chooses to monetise the receivables to third-party institutions.

Goh adds that a stock selection strategy is required amid the uncertainties in the market. “I think we have to look at stock specifics in the current environment as opposed to broader-based sector allocation,” he explains, noting that one of the key sectors to benefit from Budget 2019 is healthcare.

In November last year, the Pakatan Harapan government announced that the allocation for health services would be increased by about 7.8% to RM29 billion as it aimed to improve the quality of healthcare in the country. It also introduced the B40 National Health Protection Fund, available from Jan 1, on a partnership basis with private insurance companies.

In the partnership, the government will pilot the fund to provide free protection against the top four critical illnesses of up to RM8,000 and up to 14 days of hospitalisation income cover at RM50 per day. Great Eastern Life Insurance was mentioned as one of the first insurance companies to agree to a RM2 billion contribution to the fund, which will be managed by Bank Negara Malaysia.

Goh believes the B40 National Health Protection Fund will divert some of the patients from government hospitals to private hospitals, which, in turn, will benefit healthcare players.

HLIB has highlighted UEM Edgenta Bhd as a beneficiary of potential higher work orders from the Ministry of Health. It has a 10-year concession for 32 hospitals in the northern region (ending 2025) and saw its healthcare segment account for 46% of its revenue and 41% of its profit before tax in the first nine months of its financial year ended Sept 30, 2018.

An analyst who spoke to The Edge on condition of anonymity says selective export manufacturers could be a good bet with the ringgit hovering at a lower level than the average of 4.03 against the US dollar last year. The ringgit was trading at 4.14 against the greenback at the time of writing.

“If you look at where the ringgit is today, the exporters are already benefiting by about 3% from foreign exchange alone. Of course, with concerns about a global economic slowdown, not all the exporters will benefit. The more resilient ones, such as the glove manufacturers, could be a good option,” he says.

It is worth noting, however, that the US dollar’s strength could weaken this year with a slower pace of rate hikes by the Fed.

While it is uncertain if the glove manufacturers will be able to maintain their strong growth momentum, they performed well last year, both in terms of share price and financial results on the back of capacity expansion in the last few years. Hartalega Holdings Bhd and Top Glove Corp Bhd, the top two glove manufacturers by market capitalisation, saw total returns of 19.9% and 42.7% respectively last year and also became FBM KLCI constituents.

Traditional defensive plays down in 2018

The traditional defensive playbook may not work in current conditions as the local market faces additional pressures from the change in government last May, the analyst says.

He sees the struggles of traditional defensive counters, such as the utility and telecommunications players, as evidence of investors needing to be aware of regulatory and political risks as well. Telekom Malaysia Bhd, which offers a dividend yield of more than 4%, has fallen more than 50% in the last one year while Tenaga Nasional Bhd has lost about 7.1% in the same period.

Recall that Minister of Communications and Multimedia Gobind Singh Deo pushed the telcos to double the internet speed in the country for half the price on his first day at work, triggering a selloff in the telecoms giant on concerns over the impact on its bottom line.

Other blue-chip counters affected by policy change are the gaming counters, which were impacted by the higher taxes announced in Budget 2019. Genting Malaysia Bhd and Genting Bhd have fallen 44.4% and 35.7% respectively in the last one year. Similarly, despite the allure of high dividend yields among the number forecast operators (NFOs) such as Magnum Bhd and Berjaya Sports Toto, analysts remain sceptical about the sustainability of high payouts in the current environment. Both Magnum and BToto have a dividend yield of 8.2% and 7.5% respectively. While REITs are perceived to be defensive, they also compete with 10-year Malaysian Government Securities (MGS) that offer a yield of 4.07%. The Edge Financial Daily reported recently that the 18 REITs listed on Bursa produced an unexciting 1.88% yield spread over the 10-year MGS yield, which is a typical benchmark to compare returns from REITs.

Be that as it may, REITs may still be an asset class for retail investors seeking defensive plays and have little access to MGS.

One of the risks in this space is the rising interest rate environment. Further hikes could potentially lower the profitability of Malaysian REITs with higher finance costs and deferred acquisitions. Recall that Bank Negara raised its overnight policy rate (OPR) by 25 basis points to 3.25% in January last year. So far, most economists are expecting the OPR to remain unchanged for the rest of the year.

Nonetheless, Bloomberg data shows that most of the analysts have a “buy” or “hold” call on REITs following their decline last year. Among the 11 companies that are covered by analysts, the average return based on their target price is 7.7%.

Only KLCCP Stapled Group and Axis REIT have a negative return based on the analysts’ target prices for the year.

Maybank IB Research analyst Kevin Wong says in a 2018 strategy report that the growth of the REIT space this year could largely be organic via positive rental reversions and sustained occupancy rates as some of the REITs would record full-year rental income contributions from assets that were acquired or developed in 2018. These include Axis REIT, Pavilion REIT and YTL Hospitality REIT.

“Due to an ongoing oversupply of retail and office space, particularly in the Klang Valley, we continue to favour prime malls in prominent locations such as Mid Valley Megamall, Pavilion, Suria KLCC and Sunway Pyramid and office assets with long-term tenants such as the Petronas Twin Towers and Menara Shell,” Wong says, adding that YTL Hospitality REIT is his top buy due to its resilient earnings from its Malaysian and Japanese assets, which are on master leases with rental step-ups.