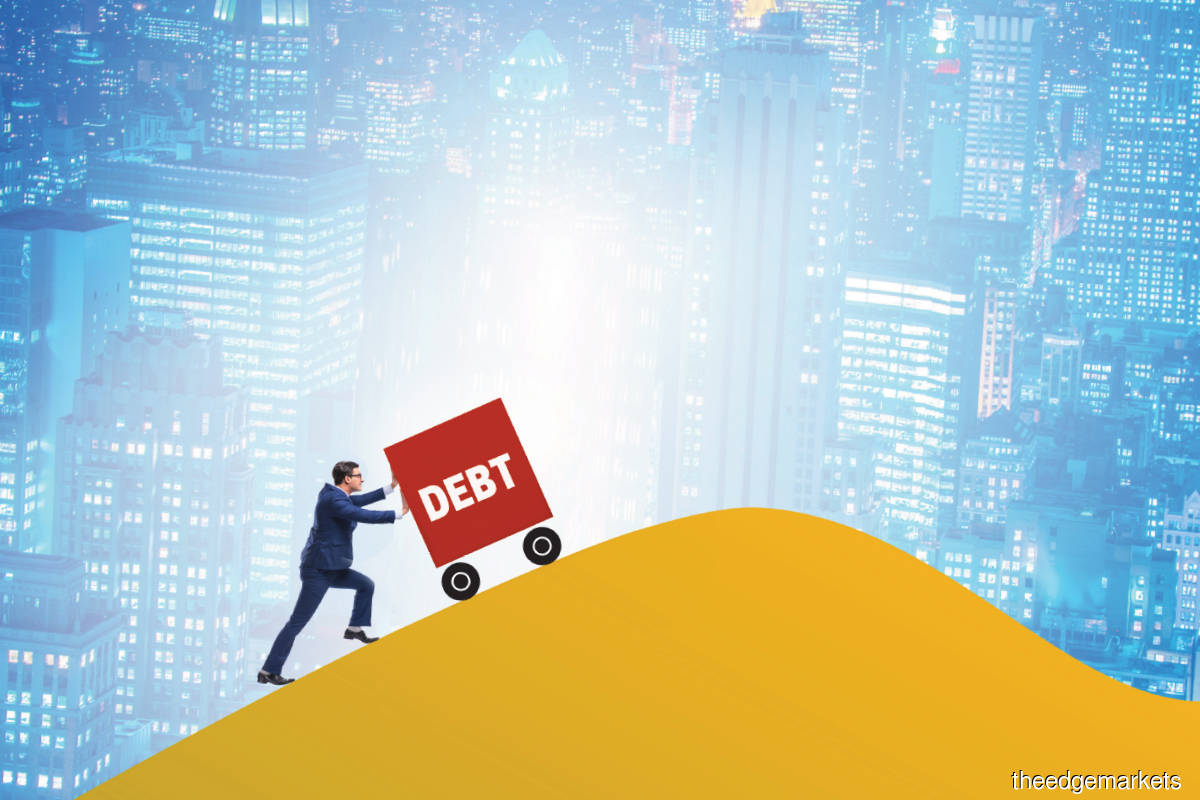 A rising interest rate environment is always perceived as bad news for everyone (except for interest-earning banks, of course) amid concerns about higher borrowing costs.

Case in point: the overnight policy rate (OPR) increase of just 50 basis points (bps) this year has reportedly kept over-leveraged Malaysian households awake at night, as everything from monthly mortgages to personal loan payments are creeping up. This, coupled with accelerating inflation and a weak ringgit at a time when some business and economic activities are still below pre-pandemic levels, has weighed on sentiment.

How will the situation pan out for corporations? Contrary to perception, an analysis by The Edge found that they are perhaps not as susceptible to the impact of interest rate hikes as perceived despite their high leverage.

Among the top 50 Bursa Malaysia-listed companies valued at more than RM500 million with the highest total borrowings or net gearing, at least half of their borrowings (excluding hedging positions and perpetual bonds) are at fixed rates, shielding them from the impact of interest rate hikes. Rather, the bigger concern among companies is the need to secure inventories and increase their workforce in the current inflationary environment while facing the prospects of softening demand as inflation and a weaker ringgit erode consumers’ purchasing power. More on this later.

“Most well-managed corporations we follow have low levels of debt. If [the rate hike is] done gradually, most can adjust to the normalisation of interest rates,” he tells The Edge.

While fixed-rate loans could be more expensive than prevailing market rates, some companies prefer to pay a premium instead of having to deal with sudden shocks when interest rates go up unexpectedly — like the jumbo 75bps hike in the US federal funds rate in June.

Fixed-rate loans typically cover corporate bonds, although some bank loans have fixed interest rate charges too. MISC Bhd, for one, has almost all of its RM15.52 billion debt made up of borrowings from banks. But at least 47% of its borrowings are at a fixed rate, based on a breakdown of its borrowings in the previous financial year.

Similarly, AEON Credit Service Bhd has 90% of its RM7.5 billion in borrowings in bank loans, but about 53% at a fixed interest rate. Yinson Holdings Bhd is another company that recently upped the proportion of its fixed-rate borrowings to above 60%, from just over 10% last year.

Nevertheless, companies are still vulnerable when their borrowings are up for refinancing. Be it bonds or fixed-rate bank loans, the new bond issuance or bank loan will come at a higher cost to match the market.

Bloomberg data show that corporate bonds that are due this year include those issued by Tenaga Nasional Bhd (three bonds worth RM263.87 million due in July to November), Kuala Lumpur Kepong Bhd (RM321.34 million due on Sept 2), Tropicana Corp Bhd (RM218.96 million due on Aug 29) and Gamuda Bhd (RM121.71 million due on Nov 23). It should be noted that the impact of interest rate changes also differs among highly geared companies. This includes the likes of Astro Malaysia Holdings Bhd and British American Tobacco (Malaysia) Bhd, each operating a mature business and with a high debt service coverage ratio relative to the size of their balance sheet.

Interestingly, there are some companies that intentionally did not hedge their interest rate risks as recently as 2021, such as Al-‘Aqar Healthcare REIT and S P Setia Bhd.

According to S P Setia’s annual report, the group anticipates a RM40.78 million swing in its earnings with every 50bps change in interest rates. This made up about 30% of its full-year profit of RM123.32 million in 2021.

“Malaysia’s current situation is significantly different from that of the US in that the domestic demand outlook is far from robust and we have not emerged from an extended period of quantitative easing and surplus liquidity,” says Fortress Capital Asset Management Sdn Bhd CEO Thomas Yong.

“In any event, inflationary pressures have been due to supply disruptions rather than overwhelming demand. Because of this, we expect domestic rate hikes to be moderate.”

Areca Capital Sdn Bhd CEO Danny Wong sees the OPR “normalising at pre-Covid-19 levels”, referring to how the benchmark had been at or above 3% in most of the last 10 years.

“The hike, which is indicatively gradual, would not have a big unexpected impact as corporations will adjust their plans. Apart from those badly hit during the pandemic like tourism and related sectors, the others should be able to ride the [economic] recovery,” he says.

A squeeze not on borrowing costs, but working capital

Rather than interest rate risks, a senior banker sees a “working capital squeeze” for companies that need to stockpile inventories during the current high commodity price environment, in the face of persistent supply chain disruptions. This comes at a time when productivity is low due to worker shortages and rising prices are putting pressure on margins as customers lose purchasing power while workers seek higher wages, he tells The Edge.

Tenaga has to face the brunt of the coal and natural gas price shocks. Although there is a fuel cost pass-through mechanism, the sharp rise in fuel prices seems to have strained the utility giant’s cash flow as it needs to pay more to procure fuel, while the compensation for the fuel cost increment is usually received six months later, if not longer.

Since the start of the year, the Khazanah Nasional Bhd-controlled utility giant experienced a 30% decrease in its cash balance to RM4.67 billion and a nearly 26% jump in short-term borrowings to RM8.79 billion as a result. Tenaga was also among the bigger listed companies that have been gearing up at a time when shareholder rewards persisted (see “Dividend payments continued despite uncertain times” on Page 69). Meanwhile, Sapura Energy Bhd, which is 40% owned by Permodalan Nasional Bhd, experienced liquidity issues because it had to burn cash as charters were prolonged and projects got delayed due to Covid-19. This was further impacted by additional Covid-19-related costs. The oil and gas player recently secured RM300 million in working capital that analysts say should last a few months.

In the healthcare sector, companies are also stockpiling medicines in the face of shortages due to disruptions in the supply of raw materials, the bulk of which are sourced from China.

It has been widely reported that companies are facing shortages of up to 1.2 million workers across sectors such as manufacturing, plantation and construction, with the government still sorting out the foreign worker employment hiccups here.

Inflation in Malaysia trails behind global trends, thanks to subsidised fuel and electricity, even though pockets of high prices — such as that of food items — brought the headline CPI to 3.4% in June, from 2.3% in January.

Concurrently, the rising interest rates globally led by US Federal Reserve’s hawkish stance has strengthened the US dollar, leading to a 6.4% year-to-date decline in the ringgit against the greenback to a five-year low of 4.45.

“Our portfolio has seen working capital requirements rise by about 30% across the board,” says the senior banker.

Curiously, it is difficult to pinpoint exactly the total debt size of corporations in 2021. Unlike previously, Bank Negara did not provide the numbers for corporate debt-to-GDP in its two bi-annual Financial Stability Review (FSR) reports last year.

In a response to The Edge, a Bank Negara spokesperson says the central bank is “not able to share the data” as it is not publicly available. “For the purpose of your story, you may quote whichever data you have found in our published FSR reports.”

Based on The Edge’s assessment, listed companies with the highest leverage included utility players, those in construction and property, as well as telecommunications, plantation, oil and gas, financial services, healthcare, REIT and steel-related companies.

While corporates can maintain credit lines for several reasons, the senior banker sees more pressure on medium-tier companies with an annual turnover of  about RM500 million or less — that are less institutionalised and family-controlled — as the wealth of the latter is invested in the business.

“The problem won’t come from rising interest rates. Instead, companies of that size that are facing these headwinds [rising input and wage costs, weak demand, supply shocks] could expect a more challenging period in the next 12 to 18 months before inflation pressures normalise,” says the senior banker.

Unless they are issuing new paper, bond issuers — namely, governments and companies — are “immune” to rising interest rates in the near term as the coupon rate on the paper is fixed. However, this is not the case for bond investors.

When interest rates rise, companies that issue new bonds will have to offer higher coupon rates to compete with other interest-bearing investment assets. Coupled with other investment instruments, that makes existing bonds with lower coupon rates less attractive. This prompts investors to sell, pushing prices downwards and resulting in lower value for long-term holders when marked to market.

“Existing debt investors would most likely be neutral or negatively affected in the short term by the rising interest rate scenario. That is because their existing bond holding portfolio would likely be affected by declining bond prices,” says TA Investment Management Bhd chief investment officer Choo Swee Kee.

“However, in the longer term, the portfolio returns [of bondholders] will increase with newer bonds giving higher yields.” He points out that the market is too volatile at the moment and he believes that most central banks, including the US Federal Reserve, are struggling to find the right level for their key policy rates, and any target rates announced will be subject to change, based on moving data.

Meanwhile, Fortress Capital Asset Management Sdn Bhd CEO Thomas Yong says fixed-income investors will “inevitably” suffer from marked-to-market losses during interest up cycles. “However, institutional investors with large fixed-income portfolios have various strategies on tenure management, credit rating diversification and having part of the portfolios to be held to maturity.”

Permodalan Nasional Bhd also invests in fixed-income instruments, which make up RM21.88 billion, or 6.5% of its RM336.7 billion in assets under management at end-2021.

A bond analyst with a local bank says, “We are not worried past the short term”, and that there have not been many concerns among domestic bond market participants following the sharp US rate hike and subsequent increase to the overnight policy rate in Malaysia. “Also when bond yields rise in the short term [as their market price falls], we can expect investors to buy,” he adds.