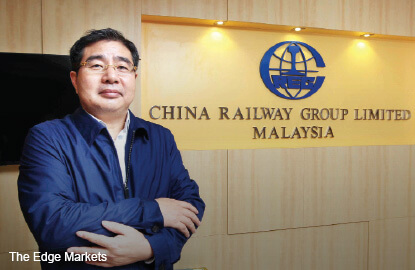 IN two weeks, China Railway Engineering Corp (CREC) and its partner Iskandar Waterfront Holdings Sdn Bhd (IWH) may be popping a bottle of champagne to mark the first anniversary of their acquisition of a 60% controlling stake in Bandar Malaysia, a legacy of controversial 1Malaysia Development Bhd (1MDB).

It is the largest investment CREC has made in Malaysia since it entered the country in 2001.

Talk that CREC’s massive investment is linked to China’s political support of Malaysia has not dissipated.

However, CREC general manager Cai Zemin downplays the political agenda of the group’s massive investment in Bandar Malaysia, explaining that the company sees growth prospects for the country and it has great potential to emerge as the strongest economy in Asean.

In December last year, 1MDB sold a 60% stake in Bandar Malaysia Sdn Bhd to IWH-CREC Sdn Bhd for RM7.41 billion. IWH-CREC is a 60:40 joint-venture company between IWH, the Johor-based property entity owned by business tycoon Tan Sri Lim Kang Hoo, and CREC, one of the world’s largest engineering and construction firms. CREC is listed on the Shanghai and Hong Kong stock exchanges.

In an interview with The Edge, Cai says the project is Malaysia’s trump card that will enable it to overtake Singapore as an Asean financial centre in 10 years’ time.

He says the country’s political climate is relatively stable when compared with peers such as Thailand.

Cai opines that Singapore has been attracting foreign funds in the last few decades thanks to the political instability in its Asean neighbours. While its peers’ infrastructure was immature, Singapore strengthened its position by building its chemical hub, port and wharf, he adds.

However, says Cai, Singapore may soon feel the heat of competition as costs are rising and Malaysia is also building the same infrastructure. For instance, the Pengerang Integrated Petroleum Complex and various ports are the growth catalysts — something that Singapore may be short of in the future — that will propel the country into a high-income nation.

Furthermore, he says, the growing anti-Muslim sentiment in the West may make Malaysia an alternative investment destination for Muslim countries. Cai adds that Singapore and Hong Kong do not have the advantages to attract Islamic funds.

For him, Malaysia does not have a world-class site like Dubai International Financial Centre or Shanghai’s Lu Jia Zui that can attract multinational firms to set up regional offices here.

“There is an urgent need for Malaysia to build an international centre. A country needs infrastructure to become a developed nation,” Cai says.

He adds that the US$40 billion (about RM177 billion) Bandar Malaysia will create demand for high-end properties, which in turn will drive demand in the middle and low-end markets.

As Malaysia’s economy is not as strong as China’s, it needs international investors to promote the country, says Cai. One way to do this is importing high-tech investment. Therefore, when Bandar Malaysia is completed, international companies such as China’s big four banks and Huawei Technologies Co will set up their headquarters there and promote it as a financial centre.

CREC will start the ball rolling with a US$2 billion (RM8.85 billion) regional centre in Bandar Malaysia. Cai says if CREC is registered in Malaysia, it will become a Malaysian company and be part of Asean.

On the market talk that CREC’s investment in Bandar Malaysia is to pave the way to getting the Singapore-Kuala Lumpur high speed rail (HSR) project, Cai says he believes the HSR, if successfully constructed, will be good for the country.

He adds that even if Singapore and Malaysia were unable to reach any agreement on the project, Malaysia should go ahead with it. “It will be Singapore’s loss if they do not want to build the HSR.”

The incentives that have been given to Bandar Malaysia have raised concerns among investors and property developers. As the key foreign developer in Bandar Malaysia, CREC has been criticised for enjoying excessive benefits that will affect free-market competition.

There is also concern that Bandar Malaysia’s sister development, Tun Razak Exchange (TRX), located just 3km away, will worsen the office glut in the capital.

However, Cai says the risks are high for the greenland project, which has such a massive investment, thus the incentives are necessary to lighten CREC’s financial burden.

“Bandar Malaysia involves a lot of investments and when those investments will start to provide returns is uncertain. Normally, if we invest in a project with high risks, we will look for bigger investment returns … we need to balance that with the risks,” Cai explains.

The Bandar Malaysia development, which will consist of three or four phases, will be developed over 25 years.

Cai says CREC will not benefit a lot from the tax incentives as it will need to commit substantial investments and will not see any income in the early development stage. “Only when we start to sell our properties, will we see more income,” he says, adding that the group will invest cautiously and gradually owing to the risk concern.

“Indeed, for this kind of greenland project, investors may also worry about the project failing … this is not something impossible. But with the participation of CREC, they should be more confident,” he stresses.

Cai thinks the incentives are in line with those offered by other countries to attract new investments.