Cover Story: ‘Creating a place where people want to be’ 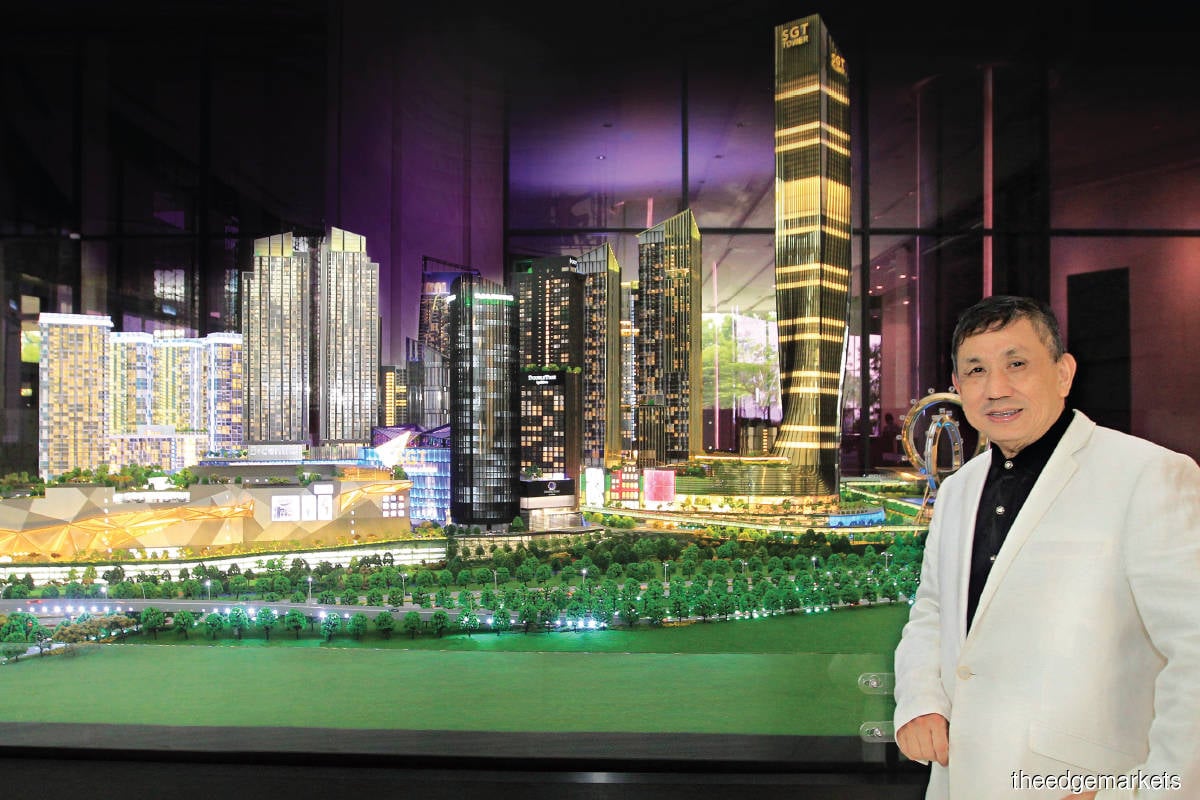 Stepping onto the highest floor of the 33-storey Sumurwang Tower in i-City, one is greeted by unobstructed views of Shah Alam and Klang. This is also where the brand-new office of Tan Sri Lim Kim Hong, chairman of i-City ­developer i-Bhd, is located.

The Grade A office tower employs facial ­recognition and QR codes for entry and lift access. The smart building, which is now 50% occupied, is part of i-City, which embodies the developer’s ABC, or Artificial Intelligence, Big Data and Cloud approach.

Speaking to City & Country recently at i-Bhd’s corporate office, Lim notes that Sumurwang Tower is a Green Building Index-certified Grade A office tower that also has Multimedia Super Corridor (MSC) Malaysia Cybercentre status. It is situated between Central i-City mall and the upcoming DoubleTree by Hilton Hotel and Hill10 Residence above the hotel. The Central i-City mall was officially opened last year, and is about 80% occupied (Photo by I-Bhd)

i-Bhd had envisioned i-City to be a technology city for local and international connections, commerce and communications when it was conceptualised more than 10 years ago.

i-City is now equipped with a 400GB network. With the deployment of 5G later, Lim expects the development to gain a significant edge in rolling out future technologies.

There is also a community mobile application for the residents, workers and businesses for various services such as online ordering, car parking, property rental, job search and payments.

“Our vision is to create a place where people want to be. i-City will elevate the city of Shah Alam to greater heights by introducing new ways for its people to live, work, shop, recreate and learn with the help of technology,” Lim says.

“When I first went there in 2008, I asked Lim about its accessibility because it was not connected to the Federal Highway for those coming from Petaling Jaya, but now, it has direct flyover access,” he says. An artist’s impression of BeCentral Residence (Photo by I-Bhd)

“It is a comprehensive digital IT community, and the ABC approach is crucial, especially now. Many people are going online for work and business [because of the Covid-19 pandemic], so network stability is very important. What is available in i-City is the fibre network of 400GB that can benefit the people who are staying and working there.”

“I came to know about the project in the 1990s when Lim wanted to turn the area into the Wall Street of Malaysia, where every public listed company will have its own corporate tower there … Today, it is the Selangor Golden Triangle, and the area has been transformed,” he says.

“In the long run, the development will do well, but in the short term, it can a bit challenging because of the pandemic and the relatively lower income level of the population in its surrounding areas. Overall, it is amazing for a developer to transform the area from estate land to an integrated development township.”

Despite the current uncertain market conditions, i-Bhd plans to go ahead with new launches in i-City.  Among them is the RM280 million BeCentral Residence. Scheduled to be unveiled very soon, the project comprises 474 units and prices start from RM500,000.

Lim says this freehold development offers modern urban-style living and is located next to the Central i-City mall, DoubleTree by Hilton Hotel as well as Sumurwang Tower. Despite the challenging market conditions, he is confident about the sales of the development.

“While the disruption [to the property market] is real, we believe it to be temporary. Value and quality will always remain pertinent to our customers. We focus on elevating and bringing value to them beyond the products we create, and we also facilitate and enable experiences that fit their needs and lifestyles,” says Lim.

“We are also exploring how we can enable homeownership via sensible financial plans to help soften the impact of the disruption. At the same time, buyers should do proper research on the property market.”

About 5,000 residential units have been completed and handed over to buyers at i-City. The Central i-City mall was officially opened last year, and is about 80% occupied. The office towers have attracted a mix of international conglomerates and local entrepreneurs.

Moving forward, Lim says i-Bhd is planning to create a socio-economic footprint within i-City that will positively improve the lives of Malaysians, by delivering a city blueprint that combines innovation, entrepreneurship and advanced connectivity.

Upon its completion, the 72-acre i-City will comprise a mixed-use township with 32 blocks, including five Grade A office towers, two convention centres totalling 69,000 sq ft, five hotels with a total of more than 1,000 rooms, 3,500 residential units, a regional shopping mall, a data centre and a theme park. It has a gross development value of RM10 billion and is currently 40% developed.

i-City is connected to major highways, such as the Federal Highway, New Klang Valley Expressway and West Coast Expressway. It is also near the upcoming i-City LRT3 station, which is connected to the buildings in i-City through the covered walkways provided by i-Bhd. Tracks for electric buses will also be built to enhance the connectivity within the township. The next development in i-City will be a 78-storey landmark tower called SGT Tower, which is set to be the tallest building in Selangor. It will comprise offices and a hotel, which will have an i-Cloud lobby and offer panoramic 360° views of Shah Alam at the coffee bar on its highest floor.

There will also be the SGT Double Eye, featuring a first-of-its-kind double Ferris wheel, with the outer wheel interlooping over the inner one.

“A big part of our lives today is intertwined with technology, which has enhanced the way we consume content, interact and seek out services.

“We look beyond just providing the ideal living environment; we want to help elevate the day-to-day lives of our homeowners through the use of technology,” Lim says.

The transformation of i-City

i-Bhd first conceived the idea for i-City in the 1990s, in line with Malaysia’s then aspiration to become a high-income nation by 2020.

The 1997/98 Asian financial crisis put a halt to the plan, and the development of the 72-acre i-City, with an initial gross development value of RM1.5 billion and an approved built-up of about five million sq ft, only commenced in 2005. The first phase, comprising the MSC Malaysia Cybercentre office suites and City of Digital Lights, was completed in 2009.

Today, i-City is a RM10 billion freehold mixed-use development, with corporate offices and residential components accounting for more than half of the approved built-up area. Its park rides and attractions have been relocated to the completed buildings in a bid to integrate the theme park elements into the property development components.

i-City has been endorsed as an MSC Malaysia Cybercentre, approved as a tourism destination by the Ministry of Tourism, Arts and Culture, and declared an International Park by the Selangor state government. It is also a recipient of The Edge Malaysia Property Development Excellence Awards 2019, which recognise large-scale property developments that have made a significant impact.

Upon completion, the development will house an estimated 30,000 residents and 20,000 knowledge-based workers.