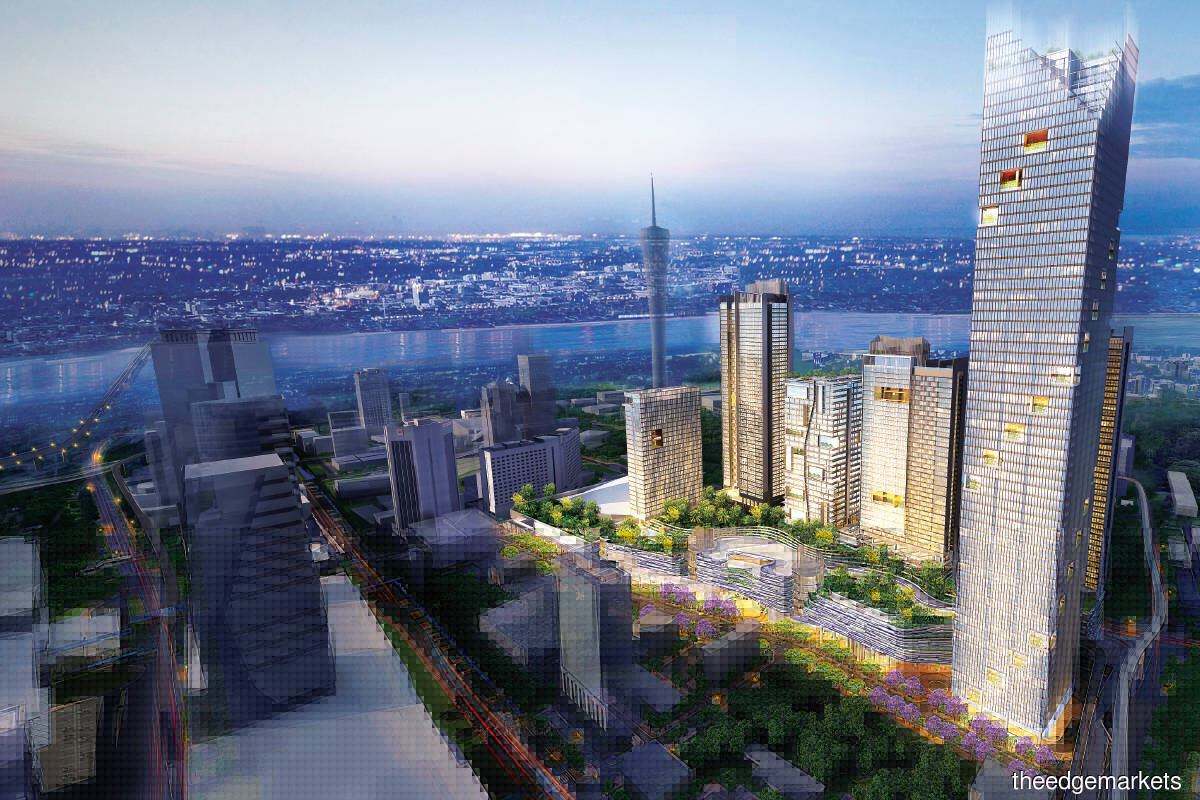 In 2015, Sultan Ibrahim Sultan Iskandar of Johor launched the Ibrahim International Business District (IIBD) transformation plan to redevelop or regenerate about 250 acres within the city centre.

Also launched at the same time was the 9.58-acre catalyst development called Coronation Square. Developed by Coronade Properties Sdn Bhd, this integrated development is flanked by Jalan Wong Ah Fook and Jalan Trus and has an estimated gross development value of RM5 billion.

“This is the first major and fully integrated development in the heart of the city,” says Coronade Properties sales manager Ong Tee Hui.

Today, structures in various stages of progress stand on the site. Once completed in 2028 and fully operational, Coronation Square is expected to draw visitors, residents and tenants. The key reason for this is its proximity to the Johor Baru-Singapore Rapid Transit System (RTS) station. Ong believes the RTS will raise property values in the area.

She says: “Johor has a lot of unrealised potential; it is a promise that has not been delivered. The catalyst that will deliver that is the RTS. The plan is for Coronation Square to have the infrastructure and products that are on a par with what Singapore has. There is a cost differentiation, so that is where the promise will be.

“Why hasn’t it taken off? It is the connectivity story. Everybody wants known travel times. People don’t want this unknown travel time. It really rattles people. And that is why I think the potential of Johor Baru has not been fulfilled.” Ong estimates that the RTS, which is a four-minute ride, will move 1,000 people per trip, or 10,000 commuters per hour. She believes these statistics will play a big role in energising the city and its surroundings.

She adds that elevated walkways will connect the RTS station and Johor Baru Customs, Immigration and Quarantine Complex (CIQ) to Coronation Square, which will encourage walking, thus reducing the use of vehicles.

“The elevated walkways offer ease of passage to Coronation Square, where visitors will enjoy international best practices in terms of vehicle, pedestrian or offices; the buildings will be Green Building Index (GBI)-rated,” says Ong.

“Coronation Square is already in the most advanced stage of development. We hope that when the RTS comes along, there will be other players, because you need critical mass.”

There are six towers linked to a common platform with basement parking that will have about 4,500 parking bays. There are inner roads to ensure that vehicles are dispersed without affecting the residents, visitors and office workers on the site. These towers will be connected to a mall that has a gross floor area of 700,000 sq ft.

“We envision it to be a destination mall that will be a green lung on the rooftop. So, we plan to have a huge green area where you can bike and walk,” says Ong.

“We also plan to build a spa, called Spa-radise. Singaporeans come here for spas and family spas. We envision having a recreation wellness area on the rooftop, where you have Balinese, Chinese and Thai spas. We believe the mall will complement the other malls in the area.”

Two of the six towers have been sold — a 30-storey tower to KPJ Healthcare Bhd and a 35-storey tower to Bank Rakyat. The KPJ Healthcare tower, which will be ready by 2Q2023 and occupy seven levels, will offer non-ambulatory, or non-emergency, medical services such as aesthetic services, dentistry, aged care and paediatrics in purpose-built medical suites.

The serviced apartment tower, called The Coronade Residences, will offer 551 units spread across 38 storeys and offer three unit sizes — 267, 516 and 704 sq ft. Ong says the smallest and the largest units can be bought together and combined to make a larger unit. The developer plans to launch it in 4Q this year, and the selling prices and the maintenance fee/sinking fund will be announced soon.

There will be about 500 branded serviced apartments, which will occupy a 44-storey tower, and the selling price will be between RM1,300 and RM1,500 psf.

Details of the 75-storey signature tower are still being finalised.

With Coronation Square poised to be the new financial district of Johor Baru, the question arises whether it will compete with Singapore.

“There is a huge cost and inflationary push in Singapore. Just like what Shenzhen is to Hong Kong, Johor can complement Singapore. It is not competition because Singapore has constraints, as seen in the huge price increases. Singapore didn’t happen overnight; it took 57 years,” she says. “Johor Baru can complement that with good infrastructure and ease of passage.”

Ong highlights that the developer will retain ownership of Level 32 of each tower to build sky bridges, which will benefit tenants and residents because it saves time and costs.

“If you have a building with people going up and down all day to access another building or services, it is costly. A connecting bridge reduces the cost of operations quite significantly,” she says. (Clockwise from top) The viewing platform at Menara Bank Rakyat; the sky bridge structure that will be connected to the adjacent building; the actual site in the midst of construction; and aerial view of the location of Coronation Square in relation to its surroundings (Photo by Pictures By Low Yen Yeing/The Edge)

Property experts familiar with both Coronation Square and Johor Baru believe that growth is expected and will happen once all the components are fully operational. Even before that happens, interest and demand is already growing, and those with foresight should keep an eye out for potential investment opportunities.

KGV International Property Consultants (Johor) Sdn Bhd executive director Samuel Tan says: “Coronation Square is an integrated development comprising office, medical centre/wellness, hotel, residential and retail components. In addition to the commercial activities, it is envisaged to bring life and vibrancy to the Johor Baru city core area with components such as residential and wellness. It is important for the Johor Baru CBD area, which used to be a pure commercial area, to be a place where people can work, live, play, shop and recuperate.

“The Johor Baru city area is gradually undergoing rejuvenation, following the effort to beautify Sungai Segget and revitalise the old city area that encapsulates Jalan Tan Hiok Nee and Jalan Dhoby locality. Coupled with the RTS, which will be operational in a few years’ time, Coronation Square — if planned and implemented properly — will be a catalyst to propel Johor Baru to be the next cosmopolitan city with a touch of nostalgia.

“Despite the strengths of Coronation Square in terms of location, quality and economies of scale, the development is not without its challenges. In particular, we must caution that the timing of the launch of development phases is as critical as the meticulous planning of the components.

“As our economy has just recovered from Covid-19 and is still subject to uncertainties such as the Russia-Ukraine conflict, US-China-Taiwan conflict, China-US trade war and oversupply issues, the timing of the launch of offices and serviced apartments, in particular, is critical.”

Tan adds that the RTS Link will see an increase in property values as the train line nears completion. The elevated walkways will provide seamless access to and from the RTS and Coronation Square, which will help increase property transaction values and volume as well as the vibrancy of the surrounding areas.

Savills Malaysia Sdn Bhd managing director Datuk Paul Khong says: “Coronation Square will be a new royal landmark development in the heart of Johor Baru city centre and it will help change and rejuvenate the entire city centre, along with Johor Baru City Square. It will connect directly to the CIQ Complex via a series of elevated skybridges.

“Coronation Square now forms part of the heart of Johor Baru city centre. This big integrated development will be the focal point in this area ... It will probably be another Mid Valley,” Khong says.

“With Bank Rakyat and KPJ Healthcare coming in, we will see synergies and more crowds coming through, complemented by the Johor Baru City Square and Komtar JB quadrant.” He adds that property values of the older shophouses in the vicinity will, naturally, rise.

Coronation Square’s location, offerings and proximity to the RTS will help establish it as a premier location with an international appeal.