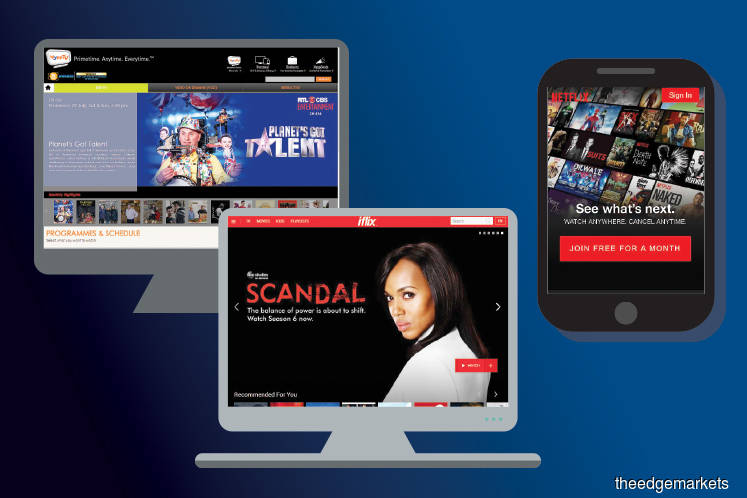 ALMOST every single broadcaster thinks that over-the-top (OTT) content is the future and they want to have a slice of the pie. So they set up their own OTT players.

On the other hand, independent OTT players — except players such as HOOQ, which has Sony Pictures and Warner Bros as its shareholders — do not have a library of readily available content to choose from. They have to secure licensing deals with production houses and content distributors. This is where they need to burn the most cash.

However, content creators who supply to the OTT players are jumping on the OTT bandwagon as well. Fox Network Group has introduced its own OTT called FOX Plus, while Home Box Office has come up with HBO NOW. The Walt Disney Company will start its own OTT platform in 2019. Disney is said to be planning to pull out its programmes from Netflix.

While the major studios will still make their content available to other platforms — whether OTT or pay TV — industry observers feel the market is going to be saturated by the offerings of similar content by multiple platforms.

Therefore, coming up with original content and localisation of content are the key for many OTT players. In Malaysia, tonton and Astro GO are the leaders, while iflix has also come up with local original content.

On the flip side, the proliferation of OTT players in this region hails the start of a golden era for Asian content. These players are not only buying the licensing rights of local Asian IPs, but are also collaborating with content creators to come up with local programmes.

“It is a great time to be content creators and IP owners. There is a bit of a bubble in OTT content acquisition but local storytellers and movie makers as well as key Asian IPs, especially South Korean, will reap the benefits,” says Vivek Couto, co-founder and executive director of Media Partners Asia.

Piracy a big challenge in Asia

Being in a region where piracy is rampant is a huge obstacle for local and regional OTT players. Some have thrown in the towel, giving up the fight against piracy, but others are still optimistic that consumers will switch from streaming content illegally to paying for OTT services. Providing quality pictures and services will give OTT players an edge in fighting piracy in the region.

MyTV Super Ltd has found that prices of set-top boxes — devices that allow people to view content for free — are dropping in Hong Kong, as consumers are opting to use OTT services instead because of their superior video quality, says S K Cheong, CEO of TVB.com, a unit of Television Broadcast Ltd.

“Pirate boxes are unstable and have low picture quality, although they have tonnes of stuff. But there will come a point when people will not be bothered to use them anymore. So we have managed to fight piracy by launching a credible, strong OTT service,” he says.

For tonton, the industry might come up with the best enforcement against piracy but the fight will only be won when consumers realise that consuming content illegally is morally wrong as well as against copyright laws.

“All the technology in the world will not be able to stop piracy. It’ll need to come through conscience and education. Why opt for inferior quality and experiences when you can get a buffet spread of top-quality content completely hassle-free for the price of a cup of coffee?” says Airin Zainul, director of tonton and Media Prima Television Networks’ licensing and merchandising business.

However, there is still a long way to go before illegal streaming can be reduced to a level where it is not a major threat to OTT players and other licensed broadcasters. The question is, how long can the industry players withstand the onslaught?

“Enforcement is a separate issue but there is a move to really stem piracy and it’s starting to gain traction. There is still a long way to go but piracy is probably the only major issue that the industry agrees on and all the actors are executing upon,” says Vivek Couto, co-founder and executive director of Media Partners Asia.

Consumers would like to receive good-quality service at a low price. However, content licensing deals are not cheap and developing original content requires even more investment. Content cost is the basic operating cost for all OTT players.

Meanwhile, illegal streaming sites and set-top boxes are still widely available. While OTTs have to invest in content and marketing, a huge number of consumers are still streaming videos illegally.

Given this background, observers agree that there will be a culling in the industry in the near future, in the sense that the OTT players will have to make sure they have a continual flow of capital to ensure that they can survive illegal streaming, while hoping that the public will realise that piracy is a poison that kills content creation.