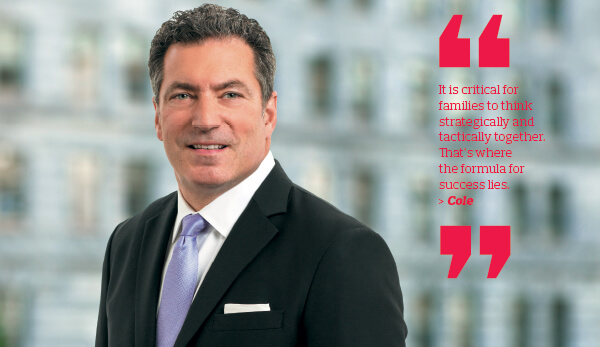 The transfer of wealth from one generation to the next fails mostly because of a lack of communication and the ill-preparedness of the future generation, says wealth adviser and author Michael A Cole.

Contrary to the popular belief that legal and financial complexities are the root cause of wealth being squandered after a few generations, Cole says the transfer of wealth often fails because of the family itself.

“Families are almost like businesses. As the entity grows with more family members coming on board, more focus is needed on strategies and tactics. It is critical for families to think strategically and tactically together. That’s where the formula for success lies.

“The strategic part is about how a family works together as an organisation in an effective and prescribed way,” he says.

Cole is the author of More Than Money — A Guide to Sustaining Wealth and Preserving the Family, which is a culmination of his more than 30 years of experience and insights from working with wealthy families. He is also the president of Ascent Private Capital Management. The wealth management arm of US Bank serves ultra-high-net-worth clients with US$75 million or more in net worth.

Quoting research conducted by experienced wealth experts Roy Orville Williams and Vic Preisser for their book, Preparing Heirs: Five Steps to a Successful Transition of Family Wealth and Values, Cole says 97% of the time, wealthy families fail in terms of long-term wealth management because of a breakdown in communication and trust among members of the family.

“Williams and Preisser studied over 3,250 families for 25 years. When most people thought that families were failing due to factors like poor investment decisions or performance, poor tax planning or poor legal structure, the majority of the failures, in fact, were a result of a breakdown in communication and trust. This was in 60% of the cases studied. Meanwhile, 25% of the cases revolved around the poor preparation of the next generation and only 5% of the time it was because of typical issues like legal, tax and financial structures,” Cole explains.

All these aspects are the essence of a successful wealth transfer exercise, he adds. “With all this in place, the successors have assigned roles and they have leadership.”

Cole recognises that planning for wealth transfer and making sure that the bequeathed wealth is properly managed is no walk in the park.

“It is hardest thing to achieve. In terms of what the wealth means to them, there is such a difference between the wealth creator and the wealth inheritor. If you’re the wealth creator, what you have amassed is a badge of honour and it is regarded as an accomplishment.

“But if you’re the wealth inheritor, you really didn’t do anything to get it other than by birthright, so it has very different dynamics.”

“From what I have seen, these situations tend to create a lot of family conflicts,” says Cole.

To ease the transition, the wealth creator must have in place a process for joint decision-making, processes for understanding shared values, to understand the history of the business, and how it was created, among others, he explains.

“These aspects have a huge impact on the long-term management of wealth as a family.”

How does one do that? The key is to emphasise family culture, ethics and shared values that transfer from generation to generation.

Using examples of family establishments that continue to make, preserve and pass on wealth over generations — such as the Kennedy Family Foundation and the Rockefeller Foundation — Cole says the strength of these foundations is their strong family values.

“These values are passed from generation to generation. What that does is, the wealth inheritors realise that to be truly successful in the long term, wealth is more than just about the money. It is also about family, their social consciousness and the intellectual capabilities of the collective group.

“My mentor, James Hughes, wrote a book called Family Wealth: Keeping It in the Family — How Family Members and Their Advisers Preserve Human, Intellectual, and Financial Assets for Generations. In it, he says there are four types of assets for a family to consider — the financial assets, the human assets, the intellectual assets and the social assets.”

Cole stresses that for successful wealth transfers to take place, families have to use the human, social and intellectual assets to leverage their financial assets.

“As opposed to giving a child a fish, you have to teach him how to fish. The families that are successful are those that learn how to give up control but do it in a way that it happens over time, to make sure there is a lot of focus on the preparation of the next generation.

“One of the things that we focus on with the families that we work with is preparing them to take on the responsibility of taking on that wealth. We tell them that it is not a diet and it is not a project, it is a lifestyle. It goes on for the entire lifetime of that generation.

“It is also about working together, as opposed to one person being in control. If there is a collective methodology for a family to work together, then it works much more effectively,” says Cole.

He adds that starting with a framework — detailing the family history and values, vision and mission planning, communication planning, family decision-making and governance, leadership development and role clarification — helps set the foundation.

“When these things are done well, then a family has the process to work together effectively, so it is not about having control just for the sake of it. They make it as a collective effort, instead of one or the other managing it. They can start out with what their values are and try to figure out where their shared and independent values are.

“Typically, the source of the wealth (usually a business) is founded by a person or a small group of people. Over time, as families grow and wealth passes through generations, you get more family members involved, which means the decision-making process also becomes more complicated.

“I recently dealt with a family, where the father had a very vast real estate empire. The father had died and left it all to his wife and three children. When I met them, I got a business card from one of the sons and it said co-president on it, and then I got another business card from another son that said co-president. This was when I realised there was a lack of communication and a lack of clear role clarification. This meant that there wasn’t a process for clear decision-making.”

Cole says individuals need to understand that fair wealth distribution may not necessarily be equal.

“Let’s say you have a family business where the majority of the family’s wealth is tied to a family business. Let’s say it is a real estate business where there isn’t a lot of cash or liquid assets. One of the problems is you’ll have one or two family members who work in the business who are very actively involved. Then you’ll have other members who are not active at all and simply want to be able to reap the fruits of the business that’s being managed and governed by someone else. That alone creates a high level of conflict,” he adds.

This is where planning the succession of the family business and stating how the assets are divided become crucial.

“It doesn’t mean you can’t have a centralised decision-making structure, but what you don’t want to do is to create a structure where some family members are putting their efforts into developing the business, while the others are not involved in the business at all yet expect an equal share.

“Equality doesn’t necessarily mean fairness. Sometimes, what you need to be able to do is to say that we are going to leave certain assets to certain family members, and we are going to use other ways to do a business buyout, so that some family members can get the share of their inheritance that’s not directly tied to the shared asset ownership,” says Cole.

When is it a good time to start talking to your children about the wealth they are to inherit? Cole says it is never too early.

He says it is pertinent to start the conversation as early as possible because children often find out they are wealthy by the circumstances around them, and not by proactive communication or a preparation plan developed by the parents.

“For example, I encountered a situation where a group of teenagers were riding in a car and were driving by [a patriarch’s son’s] house when they said to him, ‘You must be really rich’. He had never been told that before, so he was not prepared to deal with a situation like that.

“So, what you want to do is to give them generation-appropriate levels of information. Say if you’re dealing with children under the age of 10 or 12, you should be thinking about how to help them understand the value of saving, the value of investing, and the value of giving money away. Start with an allowance. Then, teach them how to divide their allowance — for spending, giving away, investing — and design it in such a way that they begin to adopt the principles surrounding the value of money.

“As they get a little older, teach them about charity, philanthropy, and the fact that there are others who are not as fortunate as we are — this knowledge becomes important,” he says.

“As time goes on, you want to prepare them further. Ultimately, if your intentions are not to give all your money to your children or not to equally divide the money among them, then it is very important that when you are alive and competent, you talk to them about it.

“We see families blow up when they find out about these things upon the passing of the first generation. Suddenly, for example, one of the children is put in a position of power and the other children are not. This is bound to destroy their relationship because the parents never really explained it all to them.

“That is why this is not a diet or a project, but a lifestyle of preparation and a culture.”

Cole explains that parents who do not take proactive measures are setting their children up for failure where wealth management is concerned.

“One of the biggest pitfalls is never talking about it and thinking about money as if it is a taboo subject. Some do this because they believe that by talking about it or telling their family members they have wealth, they will emasculate them. If done right, this will not happen.

“If you let them know there is wealth but it comes with responsibility and no guarantee that they are going to inherit it, then you, as a parent, are being more open and honest about it. Transitions are difficult, so it is important to proactively manage these transitions,” says Cole.