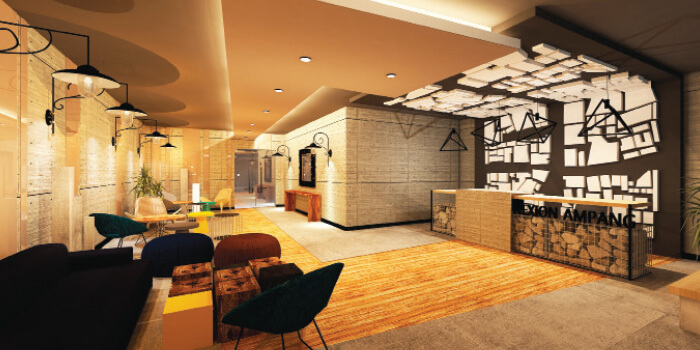 An artist’s impression of the lobby area of the RM2.1 billion 3rdNvenue, which also offers facilities such as entertainment room, library, multipurpose hall and business lounge 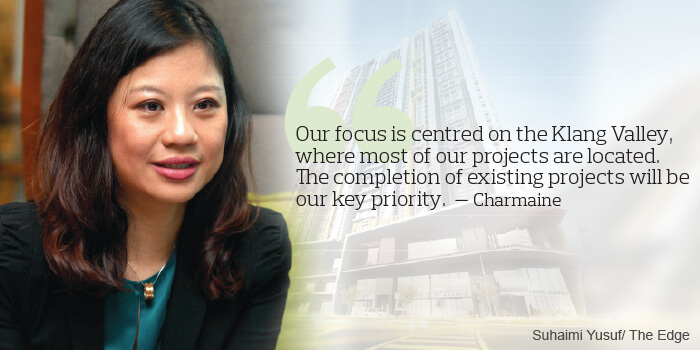 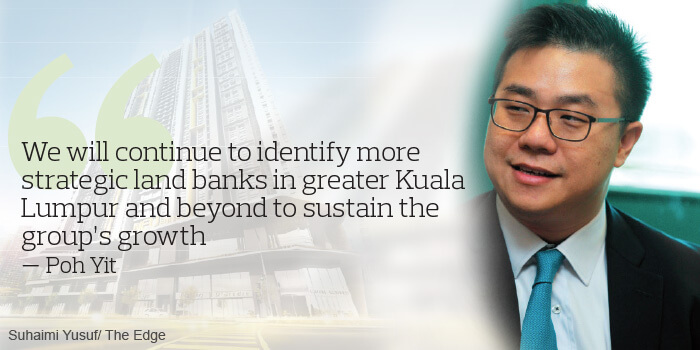 THIS feels like home,” says Charmaine Lim, executive director of Titijaya Land Bhd, as she sips her coffee and observes her surroundings at a quaint café in First Subang, SS15, Subang Jaya, one of the group’s well-known developments.

“When we develop a product, we always try to ­ensure quality, liveliness and sustainability,” she says. On a ­recent Friday morning, flocks of visitors are seen at the neighbourhood mall, which is brimming with eateries and trendy cafés. Completed in 2010, First Subang is a testament to the group’s ability to develop affordable yet stylish, vibrant projects.

Charmaine and Titijaya Land’s deputy managing director, Lim Poh Yit, tell City & Country that the group is taking certain measures to sustain itself in the slow-moving market, while maintaining its brand DNA.

“For now, our focus is centred on the Klang Valley, where most of our projects are located. The completion of existing projects will be our key priority.  All of our corporate proposals are still ongoing and a number of the projects will be revealed in the near future,” Charmaine says.

“We would like to further explore the affordable segment to expand our presence in the local market. We are focusing on developing affordable homes, with some of our ongoing projects priced below RM599,000. This is our effort to support the government’s objective in providing affordable homes,” Poh Yit says.

“We would also like to expand our target market to include foreigners in line with the government’s ­Malaysia My Second Home [MM2H] initiative. Our property prices are relatively affordable compared to other regional cities such as Hong Kong and Singapore. This is important to us — attracting more foreign direct investments to the country by capitalising on good, bilateral relationships with other countries, ­especially China,” he adds.

“Our sales target for this financial year is RM300 million. We are confident we can achieve it, depending on the market situation,” Charmaine says, adding that the target will come from projects to be launched this year.

For this year, the group’s ongoing projects include H20 Block B, Seri Alam Residence, while upcoming launches comprise 3rdNvenue, Riveria, Damansara West and The Shore in Kota Kinabalu.

Despite the stagnant property market, the group  managed to achieve a compound annual growth rate of 35.62% from 2012 to 2016. In financial year 2016, the group managed to record about RM400 million in revenue compared with RM118 million in 2012.

“We will continue to identify more strategic land banks in greater Kuala Lumpur and beyond to sustain the group’s growth,” Poh Yit says.

“There will be more collaborations with other ­interested parties, in which we will gain on our existing land banks. With this, we hope to enhance the group’s value and revenue,” Charmaine says.

“We will also explore other options such as land swaps with the owners, or direct acquisitions on ­attractive terms,” says Poh Yit. At present, the group is focusing on its upcoming launch, called 3rdNvenue, in Jalan Ampang.

Strategically located on a 6.06-acre tract in Embassy Row, 3rdNvenue is Titijaya Land’s latest attempt to develop quality products that are cost-effective yet distinctive.

In terms of design, the mixed-use development has common areas that appear modern, sophisticated and slightly industrial-looking. The grand lobby has warm furniture and structures that provide a contrast to the brick walls and bright hues.

“We are inspired by the major thoroughfare of Fifth Avenue in Manhattan, New York, which is always fashion-forward, metropolitan and trendy. We want to channel this [urban] vibe to our development and have our very own Fifth Avenue in Kuala Lumpur,” Charmaine says.

“We hope to capture the spirit of New York and its vibrancy. We have included some industrial, downtown elements to make the development appear cooler and appealing to the younger crowd,” she adds.

3rdNvenue has an estimated gross development value of RM2.1 billion, and is set to be launched in the third quarter of this year. The freehold development offers 2,500 units of serviced apartments, SoHos and retail lots in four towers of between 42 and 48 storeys high.

The serviced apartments have built-ups of 430 to 1,110 sq ft. For Phase One (Tower 1) called NEU Suites, the layouts range from 2 to 3 bedrooms, with built-ups of 430 to 601 sq ft. The facilities include a swimming pool, wading pool, gym, jacuzzi, sauna, business lounge, entertainment room, BBQ lounge, multi-purpose hall, sky dining and nursery. Prices start at RM800 psf.

“The target market for 3rdNvenue is the younger generation, mostly professionals and entrepreneurs, aged from late 20s to 40s,” Charmaine says.

“The demand for affordable properties has gone up tremendously following the rapid increase in prices. With its attractive pricing, modern industrial design and vibrant colour scheme, 3rdNvenue can capture the attention of the target group as it aptly fits the needs of young people and their lifestyles,” she adds.

Titijaya Land is hoping to capitalise on the 3rdNvenue’s strategic location and affordable pricing. To date, the group has opened 800 units for previews, all of which have been booked.

“Based on our previews, we find that prospective purchasers are mostly young professionals. Some customers even queued up as early as 4am to make a ­booking. This is encouraging as it shows there’s demand for this type of development. The facilities are designed to appear trendy and attractive to owner-occupiers as well,” Charmaine says.

“The selling price for Phase One starts from RM299,000 for a 430 sq ft unit. Located about 3km away from the Kuala Lumpur City Centre (KLCC), at a price tag of less than RM500,000, the 3rdNvenue units are definitely affordable and worth buying,” she adds.

This development is poised to attract professionals, families and even retirees. “There will most likely be foreigners wanting to migrate to Malaysia, and those under the MM2H programme,” he says.

According to Toh, the best-selling property types in Jalan Ampang are condominiums or serviced apartments. “The demand for serviced apartments in this area is encouraging. Purchasers are attracted to this place because it is near KLCC, and is within the embassy and expatriate enclave. Nonetheless, pricing is also a key driver for demand.”

“For the short term, there may be an oversupply of high-rises in Jalan Ampang. However, land is getting scarce and so in the long term, the supply will be absorbed eventually,” Toh adds.

Meanwhile, Titijaya Land has entered into a partnership with CREC Development (M) Sdn Bhd (CRECD) to develop 3rdNvenue, last November. Titijaya Land and CRECD will own 70% and 30% in the project respectively.

“The partnership with CRGL marks an important milestone for Titijaya Land. CRGL is one of the world’s largest construction companies, with a history of more than 100 years in the construction sector. By leveraging CRGL’s strength, it would help create more value for 3rdNvenue” Poh Yit says.

CRECD also sees a lucrative deal in this venture. “This is a good collaboration. We invested in this ­project because we see potential in the Malaysian market, particularly properties in the Jalan Ampang area. We believe 3rdNvenue will be a new landmark in greater Kuala Lumpur,” CRECD says.

“We are confident the development will create great interest in the commercial and residential properties in this prime area. Through our international network, we plan to promote 3rdNvenue in China and around the globe,” it adds. “We aim to bring more investments to Malaysia and expand our presence in property ­development in Kuala Lumpur.”

Titijaya Land is looking to have more similar partnerships in the near future. “Future collaborations will be similar to Titijaya-CRECD tie-up. Such collaborations will not only spur the group’s growth but also enable us to leverage our partner’s expertise in the construction industry,” Poh Yit says.

Titijaya Land will also be focusing on its latest venture — its first in Sabah — called The Shore in another partnership with CRECD. “The Shore in Kota Kinabalu, a mixed-use development, is expected to be completed in 2022. The group also will be collaborating with The Ascott Ltd to manage the serviced residence of The Shore [for 15 years],” Charmaine says.

“The Shore, with a GDV of about RM575 million, is located in a prime area where Bank Negara Malaysia, the Royal Malaysian Custom Department and other major government buildings are located,” she says.

Meanwhile, the group remains positive about the local property market. “The market is expected to remain resilient, moving forward. There is a growing trend by developers to offer units at affordable prices in tandem with increasing market demand. Besides affordable ­prices, there is also high demand for strategically located properties. The target market will be young professionals who are mostly first-time buyers,” Charmaine says.

“The young generation will be the target for most developers in the coming quarters and they will be the key drivers of market demand. Purchases by foreigners could also rise in the future, driven by factors such as the weaker ringgit and the increased numbers of ­foreigners entering Malaysia,” she adds.