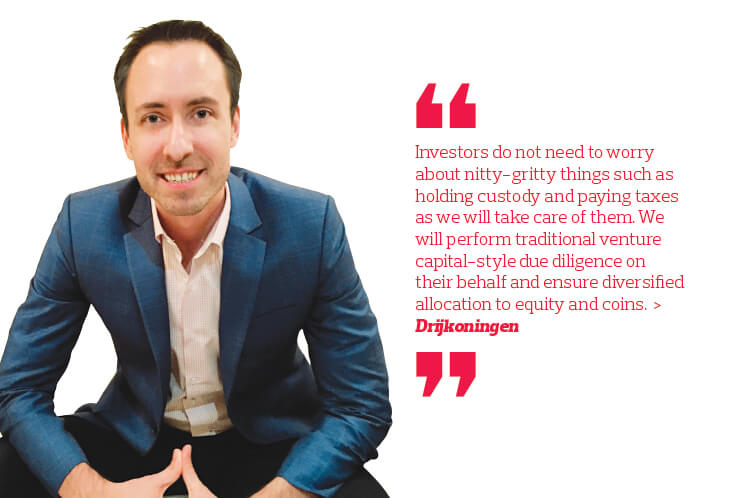 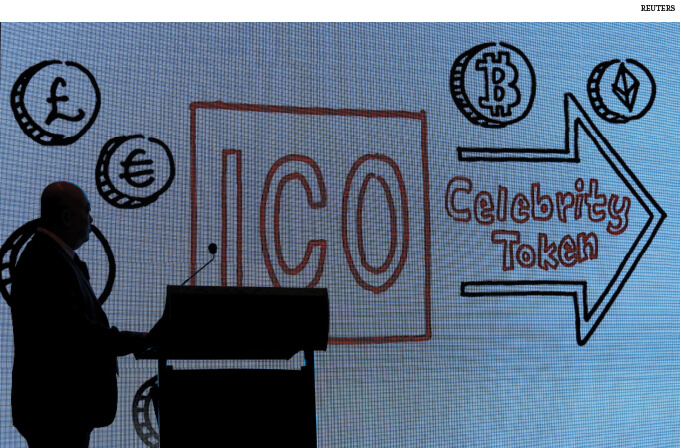 Global Crypto Offering Exchange showing a presentation during a news conference in Hong Kong. The company allows celebrities to create, list and trade their own digital tokens.

Interest in blockchain-related investments has shot up this year. Even conservative institutional investors are jumping on the bandwagon by investing directly in top-performing digital coins, initial coin offerings (ICOs) or blockchain and/or cryptocurrency-related companies.

However, some retail investors may find it daunting to invest in this space as there are thousands of digital currencies in the market, each with different properties. And if they take the equity route, by investing in blockchain or cryptocurrency-related companies, they will need to fork out a huge amount of money and spend hours on due diligence. It is also very risky, considering that most of these are early-stage firms.

Singapore-based venture capital firm Golden Gate Ventures (GGV) has launched LuneX Ventures — a fund that invests in blockchain assets globally — to provide investors with easier access to this space. The fund, which is said to be the first of its kind in the region, was the result of a partnership between GGV and its former head of growth, who is founding partner of LuneX.

The fund, which was launched in August, offers accredited investors diversified exposure to early-stage blockchain and cryptocurrency companies. It also invests in cryptocurrency assets, whether in the form of public or private tokens, which investors normally do not have access to. Private tokens are typically traded in the form of pre-ICO or pre-security token offerings (STOs).

“Investors do not need to worry about nitty-gritty things such as holding custody and paying taxes as we will take care of them. We will perform traditional venture capital-style due diligence on their behalf and ensure diversified allocation to equity and coins. So, if they believe in the long-term sustainability of the ecosystem, I think this is the best way for them to gain exposure to all asset classes in this space,” says Drijkoningen.

He was speaking on the sidelines of the Securities Commission Malaysia’s SCxSC Fintech Conference 2018 held recently. At the panel session on “The Funding Escalator”, he spoke about companies raising funds through ICOs and STOs instead of other fundraising methods.

On the equity investment side, Drijkoningen is looking at deals involving “infrastructure” businesses, or companies that offer platforms or services that the ecosystem requires to function such as custody solution providers and exchanges. “It is way too early for consumer applications. The infrastructure has to be there first. Just look at Netflix — it was not viable in 1995 because the infrastructure was not there yet,” he says.

LuneX is a five-year closed-end fund. While it is difficult to determine the potential returns at this juncture, Drijkoningen is hopeful that the fund can eventually give investors a return of 10 times their initial investment. “I believe the target is quite fair for the risks investors are taking. Obviously, I cannot promise this, but it is my goal because I have put a lot of my own money in the fund,” he says.

LuneX is managed by Drijkoningen and the fund’s principal Tushar Aggarwal, who previously worked with a few consulting firms that provided services to companies in the financial industry. Aggarwal currently runs Decrypt Asia, a weekly podcast in which he interviews investors, thought leaders, entrepreneurs and other stakeholders in the blockchain and cryptocurrency ecosystem.

The fund has made two investments in Singaporean companies thus far. The first is Sparrow Exchange, which is said to be the world’s first peer-to-peer cryptocurrency options trading platform. The other is digital asset custody solution provider Propine Capital.

Drijkoningen says he came up with the idea of launching LuneX after seeing the successful ICO of one of GGV’s investee companies — Omise — in the middle of last year. The company, which operates an open payment platform and decentralised exchange issued on Ethereum’s blockchain, raised a total of US$25 million.

GGV could not participate in the ICO as it did not have a mandate allowing it to invest in digital tokens. So, Drijkoningen started working on a fund that could invest in such assets.

He had got involved in cryptocurrencies in 2013, when he participated in a Ripple giveaway. While he thought that it was interesting that a company was issuing tokens, he did not think too much about it. He says had he looked at bitcoin at the time, he might have recognised the industry’s growth potential.

“Two and a half years ago, I finally came to the realisation that it [cryptocurrency and blockchain technology] is the next big tech revolution that we are going to experience over the next 10 to 20 years. I think it is going to be way bigger than the internet revolution. I felt so stupid for not recognising this sooner,” says Drijkoningen.

“During the early days of the internet, I knew it was going to be something big. I started building affiliate websites in the 1990s. I was just 10 to 12 years old, but I already started investing with the few hundred dollars I had, buying domain names and internet company stocks, which crashed horribly during the dotcom bust.

“This time, I knew I had to do something as well. I am now at an age where I can actually do something about it. So, I set up LuneX.”

However, it was not all plain sailing. “I had to look for an onshore lawyer, an offshore lawyer, a fund administrator, an auditor, a tax adviser and a bank. That was already six parties I was working with before the fund was even set up. With cryptocurrencies, everything became five times more complicated,” says Drijkoningen.

That was just the first hurdle, he adds. Tax and custody proved to be even bigger headaches, not to mention conversations with the regulators.

Thankfully, the Monetary Authority of Singapore was very cooperative. It even invited the LuneX team to present how the fund was structured to 30 regulators from all over the world, says Drijkoningen. On its website, LuneX states that it is a fully compliant cryptocurrency and blockchain fund.

Now that the fund has been set up, the next challenge is to convince investors to invest in this space, especially as the cryptocurrency market is looking bleak. “I think now is an amazing time to start investing because prices have gone down so much. This is reflected in equity prices a bit as well,” says Drijkoningen.

The problem, he adds, is that many accredited investors react negatively to blockchain and cryptocurrency-related investments as they are sceptical about their legitimacy. While Drijkoningen thinks this is a natural response, he says investors should be open to accepting the technology if they want to be ahead of the curve.

“I think it has to come from the realisation that the technology could be as big as the internet if not bigger. I would say it is almost irresponsible to not have at least a little exposure to this asset class,” says Drijkoningen.

“Look at how much the industry has grown over the last decade. Are they betting that it will go away?

“All they need is a bit of their time and maybe some money to make some small investments to start learning about the space because it is absolutely fascinating on many different levels. There is something in it for everyone as blockchain technology has touched almost every industry, including public governance.”

He is also targeting family offices to invest in LuneX. While the majority of these vehicles are taking a cautious stance on investments in the blockchain and cryptocurrency industry, there are some who truly understand the space and have already made their own direct investments, says Drijkoningen.

In fact, it was announced in July that Hong Kong-based asset management firm Fusang Investment Office is set to launch a cryptocurrency asset custody service called Fusang Vault. Fusang Investment Office, which serves family offices in Hong Kong, Singapore and Malaysia, credited the heightened interest in cryptocurrencies from high-net-worth individuals and institutional clients for the move.

“As you can see, the range of acceptance is very broad. Eventually, I think all of them will acknowledge blockchain and cryptocurrency as an investable industry. But it will take time,” says Drijkoningen.