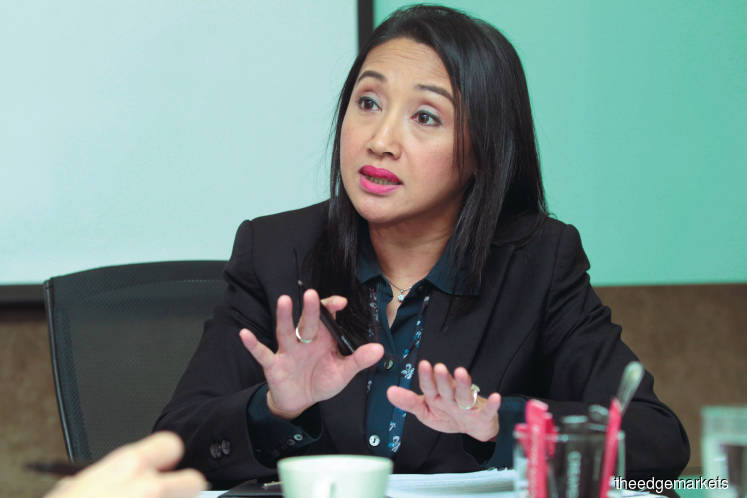 As the longer-end yields remain relatively high, we expect these to fall and prices to rally. > Hanifah

Franklin Templeton GSC Asset Management Sdn Bhd CEO Nor Hanifah Hashim tells Personal Wealth that as a lower inflation rate is expected to persist, bond yields are anticipated to decline and yield curves to flatten. “As the longer-end yields remain relatively high, we expect these to fall and prices to rally,” she says.

The overall inflation rate, measured by the Consumer Price Index (CPI), was -0.4% year on year in January, -0.7% in February and 0.2% in March. Core inflation, which excludes goods and services subject to volatile prices and other price-controlled items, came in at 0.2%, 0.3% and 0.5% during the corresponding period.

Prior to the OPR cut, the fund house took a calculated risk to snap up Malaysian Government Investment Issues (GII) with maturities of 10 years or more as prices are expected to increase as yields fall further in the wake of lower interest rates. “The environment is very conducive for the bond market,” says Hanifah.

On the other hand, she sees fewer investment opportunities in the corporate bond space amid a slowdown in the country’s economic growth. She says corporate bond issuances have fallen and credit ratings have been deteriorating.

“Starting this year, the supply of corporate issuances has not been as much as in the previous two quarters. This means corporates are not borrowing money through the bond market to invest in their businesses. The new issuances are mainly from the government side,” says Hanifah.

“We also found that corporates are facing thinner profit margins in their efforts to remain competitive. They have tighter balance sheets, which weaken their credit profile. In fact, the number of corporate bonds that experienced negative actions by rating agencies have outnumbered those with positive actions in the previous two quarters.”

Thus, Hanifah is holding on to her existing corporate bond portfolio to generate extra returns. “Higher-yielding corporate bonds are still our core. But we have to be mindful that if we were to liquidate some of them, there would not be any attractive replacements in the market. So, if we wanted to sell [our existing holdings], we would have to think twice before doing so,” she says.

Having said that, Hanifah points out that the local bond market remains resilient and the default rate in the corporate bond space is very low.

On April 5, Norway’s sovereign wealth fund announced that it would streamline its US$300 billion fixed-income portfolio by cutting emerging-market bonds — including Malaysia’s — from the benchmark index it tracks. On April 17, FTSE Russell, a stock market index provider, placed Malaysia on the fixed-income watch list for at least six months and could potentially exclude MGS from its World Government Bond Index.

Two days later, Moody’s Investors Service said that it viewed the government’s financial aid of RM6.2 billion (equivalent to 0.4% of the country’s GDP) to the Federal Land Development Authority as credit negative.

These events dampened foreign investors’ confidence in the Malaysian bond market. They also caused MGS yields to rise. However, prices returned to their previous levels in the second half of April, says Hanifah.

According to her, the local demand for MGS remains strong and there is ample liquidity in the market to absorb the bonds sold by foreign investors. This demand mainly comes from institutional investors such as the central bank, pension funds and sovereign wealth funds.

“These are long-term investors who know the local market well and have natural exposure to fixed income and local assets. In general, about 60% of their investments go into fixed income, including bonds. As long as their bases continue to grow, they will invest in high-quality MGS,” says Hanifah.

She adds that local institutional investors are also less impacted by foreign exchange fluctuations as they operate locally. Also, these investors truly understand the Malaysian bond market and did not sell their MGS holdings last month. In fact, some of them took the opportunity to buy more bonds and have benefited from the recovery in prices, she points out.

“If you analyse further, you will see that the foreign holdings of conventional Malaysian government bonds are at a multi-year low. It is about 38% and has bottomed out. Local institutional investors could easily absorb any sell-off that occurred,” says Hanifah.

“It was about 50% pre-election. Those who remained in the market were mostly long-term investors attracted to the yields.”

Good time to learn about bonds

Hanifah says individual investors should start learning more about the local bond market because this asset class tends to outperform others when there is a slowdown in economic growth. Higher stock market volatility (due to local and global political uncertainties) also tends to drive more investors to the bond market as they are in search of certainty and a steady income stream.

Hanifah says if they had studied the market and analysed the options, the more sophisticated retail investors would have taken advantage of the knee-jerk reaction in the market and mopped up the bonds dumped by foreign investors. Then, they could have bought the bonds before the prices recovered due to potentially strong local demand. Also, these investors would have been able to spot good opportunities when corporates issued bonds associated with attractive yields.

“In fact, more high-net-worth individuals (HNWIs) have been investing directly in bonds, especially high-yielding corporate bonds through banks’ private wealth departments in the past few years. This trend can be analysed by the growth we see in the volume of bonds bought in odd lots on the market,” says Hanifah.

“For the Malaysian market, the standard lot for corporate bonds is RM5 million. When you see a lot traded in a smaller amount, especially RM250,000, it is most likely a transaction done for an HNWI.”

Previously, retail investors were unable to buy corporate bonds directly as the minimum investment amount of RM250,000 offered by banks was considered too high. The only way for them to access the market was through bond unit trust funds.

However, the bond market is undergoing a liberalisation exercise and the threshold for accessing MGS and corporate bonds has been lowered significantly. “Bonds as an asset class is much more accessible to retail investors today. It is a good time for them to start learning about the bond market,” says Hanifah.

Last year, the Securities Commission Malaysia (SC) announced the liberalisation of its regulatory framework that allows corporate bonds and sukuk to be issued more efficiently to retail investors. The regulator also introduced a new framework that enables retail investors to directly access existing corporate bonds and sukuk previously available only to sophisticated investors through the over-the-counter market.

Hanifah says information pertaining to the bond market, such as consolidated bond prices and credit information, has been made available with the launch of the Bond and Sukuk Information Exchange launched by the SC in November 2017. “The platform is useful and some information provided by the platform was not free previously. Investors can utilise the platform to help them invest in bonds.”

Malaysian sukuk has proved to be a superior alternative to conventional bonds. However, it needs to be promoted more by industry leaders for it to grow its global footprint, says Nor Hanifah Hashim, CEO of Franklin Templeton GSC Asset Management Sdn Bhd.

The perception that shariah-compliant investment products tend to generate lower returns than their conventional counterparts is incorrect in the case of sukuk and bonds, she adds. “Sukuk can be better, if not comparable. This is shown through the performance of some sukuk funds when compared with conventional ones.”

According to the Lipper Fund Table, sukuk funds delivered an average return of 26.1% and 6.3% over a five- and one-year period respectively as at May 10. This compares with the average return of 24.8% and 5.7% provided by conventional bond funds.

The good track record of sukuk has enabled her to persuade more investors to buy into the asset class. But this is not enough for the shariah instrument to really take off globally. It needs to be promoted more through education and a higher level of acceptance by conventional investors, says Hanifah.

She adds that sukuk and Islamic finance gained a lot traction globally when Tan Sri Dr Zeti Akhtar Aziz was governor of Bank Negara Malaysia as she was highly regarded by financial industry players globally and had continually promoted Islamic finance around the world. “Regulators could help pave the way by encouraging more activities in the Islamic finance space.”

Hanifah says Islamic finance will need to find common ground with conventional finance to attract more investments into sukuk. And environmental, social and governance (ESG) investing is one of them, she adds.

“Islamic finance shares similar values with ESG. If we can tap ESG investors, we will have a bigger buy-in from investors globally. The ESG investment trend is quite big in the EU.”

In 2017, sukuk issuances by the Malaysian government and corporate entities hit RM79.01 billion, representing 53.3% of total bond issuances in the country, according to the International Financial Market’s Sukuk Report 2018.

In terms of product innovation, there are six outstanding green sukuk issued by local corporates to fund their businesses defined as environmentally friendly under the Securities Commission Malaysia’s Sustainable and Responsible Investment Sukuk Framework, says Hanifah. “However, like any new sector, the green sukuk space is going through quite a rough patch in terms of credit quality. Two out of six issuers have been put under ratings watch as they are facing delays in their construction projects.”

She says Franklin Templeton GSC is looking to contribute to product innovation by exploring a shariah-compliant investment strategy that will allow the fund house to invest in real estate-related private equity. “The strategy has not been implemented yet. We are still working with our shariah advisers to see how we can implement it in a shariah-compliant way.”

The minimum investment for retail investors to directly access Malaysian Government Securities (MGS) and corporate bonds has been lowered significantly — from RM250,000 to RM1,000 — with Fundsupermart.com’s Bond Express.

It is worth noting that two of the 12 corporate bonds listed on the platform are perpetual bonds, which are those with no maturity dates. However, there is a call date, when the issuer will buy back the bonds and return the principal to the investors.

The complexity level of a bond is shown on the platform. Investors can also read the instrument’s information memorandum by scrolling down the screen and clicking on the “offering circular”.